You are here: Home / Puns: Funny, Good, Bad and Best Play on Words

Puns have been described as the lowest form of humor. From where we sit, we don’t buy. They can show wit, timing and a sense of play. Plus, some of them are just plain funny. Oh, sure, you’re going to find those terrible puns that make everyone groan. But, that’s part of the fun, too!

Pun Menu — Jumps to Another Page

To pun is to use words that sound alike but have a different meanings. They are used for a humorous effect and these will have you thinking, laughing, and knee-slapping – sometimes, all at the same time. Sometimes in life, it’s good to just try and have little fun with some silly wordplay. So, have a look through and see if these selections tickle your funny bone. It just might be punamania!

What does a spy do when he gets cold?
He goes undercover.

What do you call a country where everyone drives a red car?
A red carnation.

What’s a chimney sweep’s most common ailment?
The flue.

When does a boat show affection?
When it hugs the shore.

What is the difference between one yard and two yards?
A fence.

What color is a belch?
Burple. 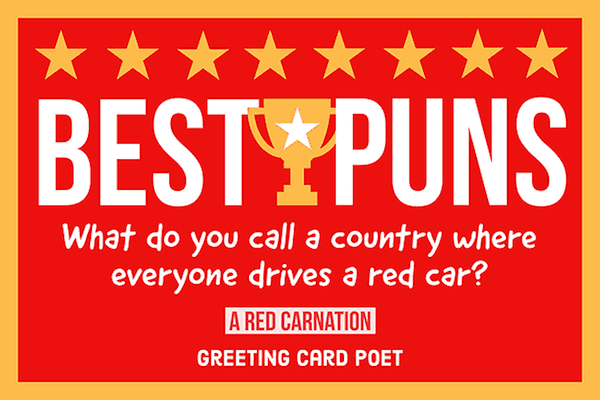 You’ve got me in a state, and I fear that it’s contiguous.

Our local hardware store was giving away dead batteries free of charge.

If Satan lost his hair, their would be hell toupee.

Pencils should have erasers at both ends, but what would be the point?

Ask your pizza guy for a joke and he’ll deliver.

I’d tell you my construction joke but I’m still working on it.

The best way to communicate with a walleye is to drop them a line.

Good dental customers are familiar with the drill.

To the guy who invented zero: Thanks for nothing!

I’m not sure how I feel about my mood ring being stolen.

If you don’t like it, the Exodus is over there.

I miss your fowl jokes but I’ll get rooster it.

A good steak pun is a “rare medium well done.” 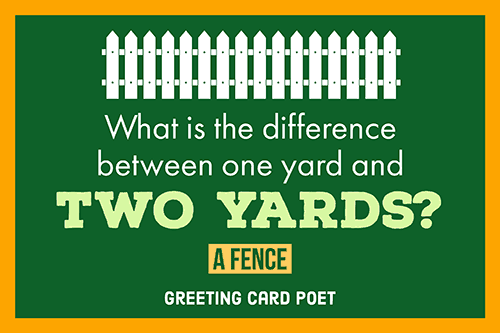 Why was a rubber band pistol was confiscated from algebra class?
Because it was a weapon of math disruption.

Why was the dog cited for littering.
Because she was giving birth to puppies near the road.

What happened after two silk worms raced?
They ended up in a tie.

Who was the midget fortune-teller who escaped from prison?
A small medium at large.

What happened to the soldier who survived mustard gas and pepper spray?
He is now a seasoned veteran.

Why should you work for a cause?
Because you should never work for an applause.

Why can’t a bicycle stand on its own.
It’s two tired.

Why was the girl no longer addicted to soap?
Because she’s clean now.

What did the tired couch say after a long day?
I’m now inclined to lay back.

What should you do if you turn into a kleptomania and it gets bad?
Take something for it.

What happened to the thief who stole a calendar?
He got twelve months.

What happened to the batteries who let out of jail?
They were given out free of charge.

Why did the relationship end between the dentist and a manicurist?
Because they constantly fought tooth and nail.

What is a dead giveaway?
A will. 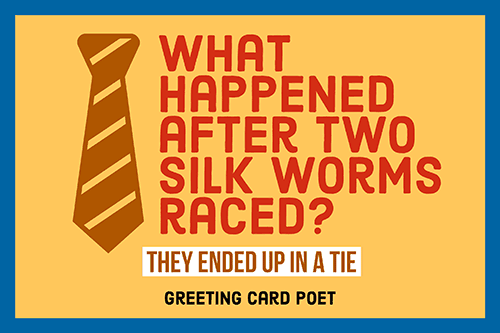 Addicted to somersaults?
No, that’s just how I roll.

What kind of food is hard to beat in a race?
An egg.

What happens when you see one shopping center?
You’ve seen a mall.

Did you hear about the fellow whose whole left side was cut off?
He’s all right now.

I asked my mother to make me a pair of jeans.
She was happy to, or sew it seams.

I’m pals with 25 letters of the alphabet.
I don’t know why.

What’s the difference between our pizza puns and a pizza?
My pizza puns can’t be topped.

I was waiting in queue for a fruit drink, but I forgot the punch line.

What happened to the guy who fell onto an upholstery machine?
He quickly fully recovered.

Why was the photographer sad?
Because he had a photographic memory which was never developed.

What happened when the woman discovered she had grey hair?
She thought she’d dye.

I tried to catch some fog.
I mist.

What happened to the woman who fell into the glass making machine?
She made a spectacle of herself. 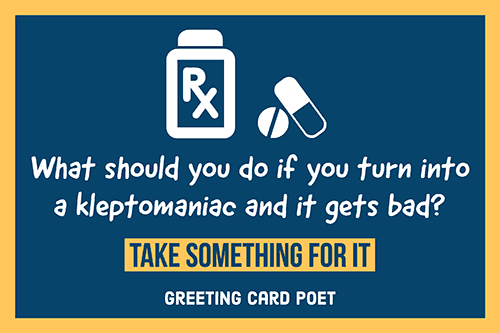 What is a pun?

Puns are the kind of witticisms that many enjoy. Although they can be quite clever, but often come off as silly, cheeseball attempts at humor. It works by using a comedic phrase which plays off of the sounds and double meanings of words. The fun play on words is what really gets people thinking — after you stop belly laughing that is!

How do chickens dance?
Chick to chick.

What did the chimpanzee say when his sister had a baby?
Well, I’ll be a monkey’s uncle.

What happens to illegally parked frogs?
They get toad away.

What did the guitar say to the musician?
Pick on someone your own size.

Why are rivers always rich?
Because they have two banks.

What day of the year is a command to go forward?
March 4th.

What do you call a baby monkey?
A chimp off the old block.

What did the grape say when the elephant stepped on it?
Nothing, it just let out a little whine.

What do you get when you pour cement on a burglar?
A hardened criminal.

What happens when you dream in color?
It’s a pigment of your imagination.

What do you get if you cross a bullet and a tree without leaves?
A cartridge in a bare tree.

Why was the man comfortable with seeing the dentist?
Because he already knows the drill.

Where did the king put his armies?
In his sleevies.

Why didn’t the class want to take a field trip to the Coca-Cola factory?
Because they didn’t want a pop quiz.

What is the difference between a well dressed man and a dog?
The man wears a suit, the dog just pants.

Did you hear about the man who ran through a screen door?
He strained himself.

Why do ambassadors never get sick?
Diplomatic immunity.

How often do bakers trade bread recipes?
On a knead-to-know basis.

Why is the farmer outstanding?
Because he’s an expert in his field.
I got a job at a bakery because I kneaded dough.

Why does the girl hate Haunted French pancakes?
Because they give her the crepes.

Why don’t old cashiers ever die?
Because they just check out.

Why was the chewing gum manufacturer arrested?
For unlicensed ex-spearmints.

What did the toy store sign say?
Don’t feed the animals because they are already stuffed.

Why did the baker stop baking?
He didn’t make enough dough.

What is gossip?
Someone with a great sense of rumor.

What do you call a veterinarian with laryngitis?
A hoarse doctor. 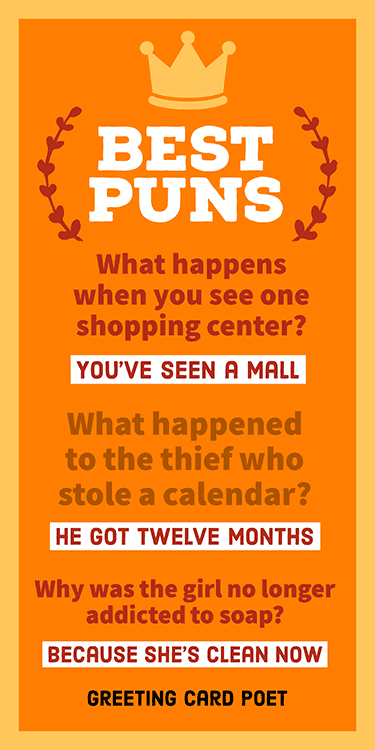 Where did Noah keep his bees?
In the ark hives.

What is a chicken crossing the road?
Pooultry in motion.

What’s the motto of the ghoul’s convention?
The morgue the merrier.

What must you know to be an auctioneer?
Lots.

How do you achieve a successful diet?
Put your mind over platter.

Why isn’t rust is edible?
Because it’s a form of car-rot.

What happens to deposed kings?
They get throne away.

What kind of tree do fingers grow on?
A palm tree.

What is the gambler’s heaven?
Paradise.

What do you call a rabbit with fleas?
Bugs Bunny.

What do you call two people in an ambulance?
A pair of medics.

Hanging is too good for a man who makes puns; he should be drawn and quoted.
Fred Allen

Puns are the droppings of soaring wits.
Victor Hugo


Punning is a virtue that most effectually promotes the end of good fellowship, which is laughing.
Jonathan Swift

A pun is a short quip followed by a long groan.
Unknown

It’s hard to explain puns to kleptomaniacs – they always take them literally.
Unknown

I live and die by puns.
Feist

Of puns it has been said that those who most dislike them are those who are last able to utter them.
Edgar Allan Poe

The pun is the lowest form of wit.
Samuel Johnson

Our editor, Mike O’Halloran, compiled this list of the best puns.

You’re on our Best Puns page.