You are here: Home / Funny Puns and Word Play Jokes

If you love funny puns, then settle in because you’re in the right place. Who doesn’t love a good joke now and then? From clean corny jokes and hilarious one liners, to witty riddles, we’ve got just what you need. And whether or not you’re a fan of word play, our collection is sure to spark humor, laughter, and enjoyment for anyone.

If you need cheering up on a bad day or you just love to laugh, these one liners and questions and answers are guaranteed to bring on a serious case of laughs – seriously just read and see! And, remember, the pun is mightier than the sword.

Did you hear what happened to the two peanuts?
They both were assaulted.

Did you hear about the guy that lost his left arm and leg in a car crash?
He’s all right now.

How do crazy people go through the forest?
They take the psycho path.

What did the pirate get on his report card?
Seven Cs.

How do you put a baby alien to sleep?
You rocket.

Herb gardeners who work extended hours get thyme and a half.

What’s E.T. short for?
Because he’s got little legs. 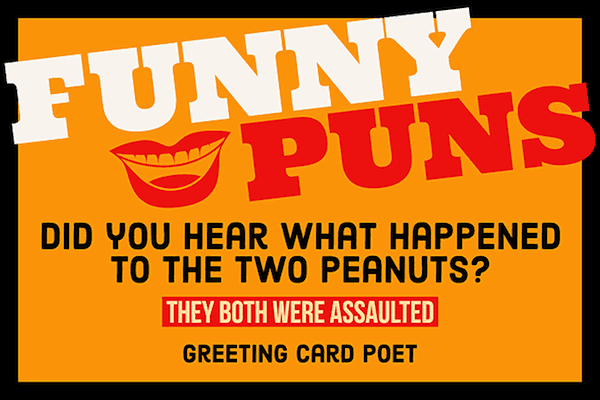 The waist is a terrible thing to mind (especially if you’re on a diet).
Unknown

Who’s on First?
Abbot and Costello

Rumack: Can you fly this plane, and land it?
Ted: Surely you can’t be serious.
Rumack: I am serious … and don’t call me Shirley!
Dialogue from the movie Airplane

We Polked You in ’44, We Shall Pierce You in ‘52.
Democratic Campaign Slogan

Why should the number 288 never be mentioned in company?
Because it is two gross.

Check out our funny, hilarious jokes.

How many bugs do you need to rent out an apartment?
Tenants.

Why did the picture go to jail?
Because it was framed.

What did the the drummer call his twin daughters?
Anna one, Anna two.

How do you get holy water?
Boil the hell out of it.

What did the fish say when he hit a concrete wall?
Dam.

What do you call four bullfighters in quicksand?
Quatro sinko.

Did you hear about the guy who invented Lifesavers?
They say he made a mint.

What did the big chimney say to the little chimney?
You’re too young to be smoking. 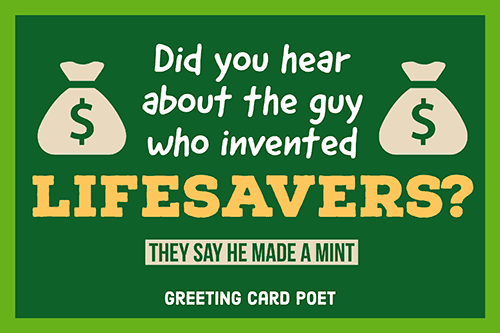 What do prisoners use to call each other?
Cell phones.

What do you get from a pampered cow?
Spoiled milk.

Why are horses better than other animals?
Because they’re very stable.

What do you call a guy with no shins?
Tony (Toe-knee).

Why does Piglet smell?
Because he’s always playing with Pooh.

How do you make anti-freeze?
Take away her blanket.

Why do they put fences around graveyards?
Because people are dying to get in. 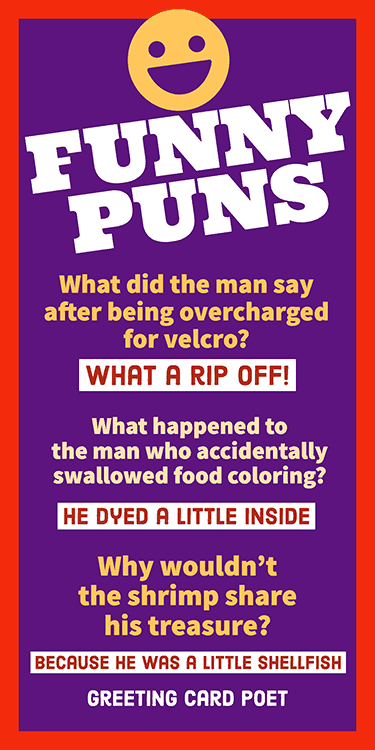 Why is there a gate around cemeteries?
Because people are dying to get in.

What do you calling a sneezing nut?
A cashew.

Why wouldn’t the shrimp share his treasure?
Because he was a little shellfish.

What lights up a soccer stadium?
A soccer match.

Why was the baby strawberry crying?
Because his mom and dad were in a jam.

Why shouldn’t you write with a broken pencil?
Because it’s pointless.

Note: Have any suggestions for our collection? Please let us know via the Contact page. Thanks.

Did you hear about the new restaurant that serves curry poured on to hash browns. The dish is called, “Curry on My Wayward Spud.” And, yes, “There’ll be peas when you are done.”

Why did the man put his money in the freezer?
He wanted cold hard cash.

What lies at the bottom of the ocean and twitches?
A nervous wreck.

Why did the barber win the race?
Because he took a shortcut.

Why didn’t the man get a brain transplant?
Because he changed his mind.

What did the detective say about the man who got crushed by a pile of books?
He only had him shelf to blame.

What did the man say after being overcharged for velcro?
What a rip off!

Why are books about anti-gravity so great?
Because they’re impossible to put down.

How did the kid learn how to fasten his seatbelt?
He doesn’t know, one day it just clicked.

Where do baby spoons come from?
The spork delivers them.

Why shouldn’t you spell ‘part’ backwards?
Because it’s a trap.

Why don’t cannibals eat clowns?
Because they taste rather funny.

What happened to the man who accidentally swallowed food coloring?
He dyed a little inside.

Why shouldn’t you a chemistry joke?
Because know the person you tell it to might get a reaction.

What happened to the future, present, and past when they walked into the bar?
It was tense.

Why should you never try to eat a clock?
Because it’s very time-consuming.

Why should you beware of using duct-tape?
Because you’ll become too attached to it.

What did the woman say after understanding how gems are made.
The concept is crystal clear to me. 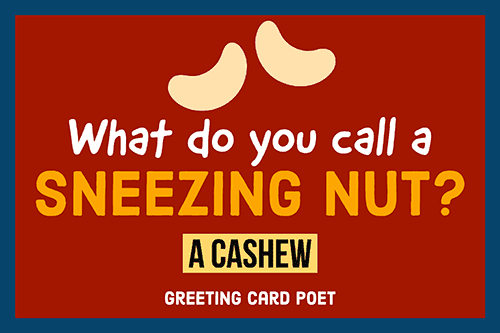 Do you have a date for Valentine’s Day?
Yes, it is February 14th.

Why should you never break up with a goalie?
Because he is a keeper.

What did one boat say to the other boat?
Are you interested in a little row-mance?

What did the patient with the broken leg say to their doctor?
Hey doc, I have a crutch on you.

Why should you not marry a tennis player?
Because love means nothing to them.

What’s the definition of love?
The delusion that one woman is different from another.

What do you call cheese that’s not yours?
Nacho cheese.

Why shouldn’t you write with a broken pencil?
Because it’s pointless.

What do you get when you put a candle in a suit of armor?
A knight light.

What did the policeman say to his belly button?
You’re under a vest!

Why are pirates so mean?
I don’t know, they just arrrrrr.

What do you call a fake noodle?
An impasta.

What did one toilet say to the other?
You look flushed.

Why wouldn’t the shrimp share his treasure?
Because he was a little shellfish.

Considered the ultimate form of wordplay by many, puns illustrate the humorous art of jokes. What makes them funny is the combination of the play on words and what your brain actually imagines when you visualize it in reality. The work by bringing words to life by using their many meanings or as well as the way a word sounds in order to create a joke or humorous saying. For example, the word “case,” could mean either a piece of baggage or a instance of a disease. Wordplay humor is subjective, so what may be amusing to one person, may not to another. Regardless, they are still tons of fun and good for the brain!

Learn more about the meaning at Merriam-Webster.

These funny puns were collected by Mike O’Halloran, who is the founder of Greeting Card Poet.

You’re on our Funny Puns page.