They’re really cheesy and may only have the power to make a chemist laugh, but worry not because we’ve included an answer below each joke so, at least you’ll understand their cheesy humor. Who knows, you may even learn something along the way!

Embrace your inner geek with these chemistry jokes and share some of these jokes with your labmates or other chem enthusiasts to get the reaction you’re looking for. Take a look below! 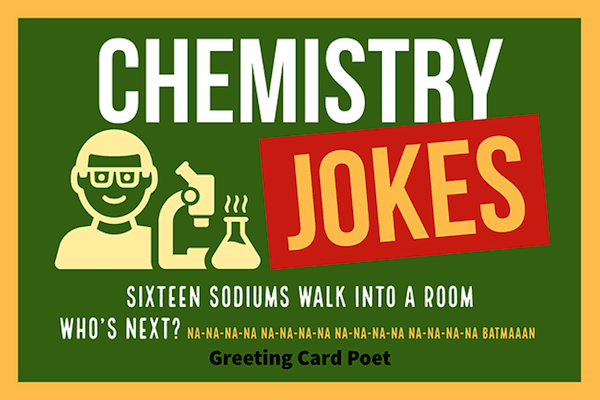 Why did the employer force his employees to walk between high-voltage plates before entering the workplace?
Because he didn’t want any unionized workers.

How do you make a 24-molar solution?
Put your artificial teeth in water.

A biologist and a physicist got married but they soon got divorced.
There was just no chemistry.

What did the chemist snack on during lunch?
A ‘gram’ cracker.

What did the thermometer say to the graduated cylinder?
“You may have graduated but I’ve got many degrees.”

Why do chemists enjoy working with ammonia?
Because it’s pretty basic stuff.

How many physical chemists does it take to change a light bulb?
Only one, but he’ll change it three times, plot a straight line through the data, and then extrapolate to zero concentration.

What happens when spectroscopists are idle?
They turn from notating nuclear spins to notating unclear puns.

How many physical chemists does it take to wash a beaker?
None, that’s what organic chemists are for.

Check out: Truth or Dare Questions

What do you call a tooth in a glass of water?
A one molar solution.

What is a chemist’s favorite kind of tree?
A chemistree.

What kind of dogs do chemists have?
Laboratory Retrievers.

Why do chemistry professors like to teach about ammonia?
Because it’s the basic material.

Why did the acid go to the gym?
To become a buffer solution.

What did one ion say to the other?
I’ve got my ion you.

Why did the chemist sole and heel his shoes with silicone rubber?
To reduce his carbon footprint.

What did you do with Element 43 last night?
None of your Bismuth.

What do you call a clown who’s in jail?
A silicon.

How can you spot a chemist in the restroom?
They wash their hands before they go.

What emotional disorder does a gas chromatograph suffer from?
Separation anxiety.

What did the Mass Spectrometer say to the Gas Chromatograph?
Breaking up is hard to do.

Have you heard the one about the sick chemist?
If you can’t Helium and you can’t Curium, you’ll probably have to Barium.

How do Sulfur and Oxygen communicate?
They use a Sulfone.

What element is derived from a Norse god?
Thorium.

How do Sulfur and Oxygen communicate?
A sulfone.

What two elements do sheep yell out when happy?
BaH.

What is the chemical formula for “coffee”?
CoFe2.

What is the TV show that cesium and iodine love watching together?
CSI. 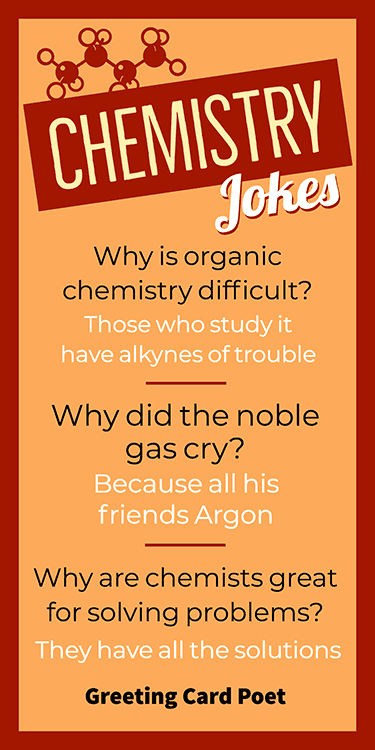 What is the chemical formula for “banana”?
BaNa2.

Does anyone know any jokes about sodium?
Na.

Why did the noble gas cry?
Because all his friends Argon.

Why are chemists great for solving problems?
They have all the solutions.

Why did Carbon marry Hydrogen?
They bonded well from the minute they met.

How did Oxygen’s second date with Potassium go?
It went OK2.

Did you hear about the chemist who was reading a book about Helium?
He just couldn’t put it down.

What do you call Iron blowing in the wind?
Fe-breeze.

Why is organic chemistry difficult?
Those who study it have alkynes of trouble.

What is the most important rule in chemistry?
Never lick the spoon.

Why does a hamburger have lower energy than steak?
Because it’s in the ground state.

How did the blonde define hydrophobic on her chemistry exam?
Fear of utility bills.

What happens to nitrogen when there’s sunlight?
It becomes daytrogen.

Why do chemists like nitrates so much?
They’re cheaper than day rates.

What did one titration say to the other?
“Let’s meet at the endpoint.”

Why does formic acid neutralize all other acids?
Because it’s ant-acid.

Why shouldn’t you trust atoms?
Because they make up everything.

What do you get if you swap the carbon atoms in a benzene ring for iron atoms?
You get a ferrous wheel.

Two atoms are walking down the street.
One atom says to the other, “Hey! I think I lost an electron!”
The other says, “Are you sure?”
It said, “yes, I’m positive!”

You’d think that atoms bonding with other atoms would mean they’re being friendly, but really they steal each other’s electrons.
How ionic.