You are here: Home / Archives for Quotes and Captions 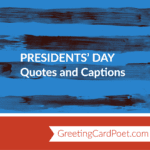 We usually celebrate President’s Day by attending a furniture sale. But reviewing this collection of quotes, captions, and FAQs is a wonderful way to begin the celebration. In 1968, as part of the Uniform Monday Holiday Act, it was moved to the third Monday in February. Originally a celebration for George Washington’s Birthday (February 22). Then, Abraham Lincoln’s (February 12) Birthday was added, and today we celebrate all 46 Presidents. The holiday celebrates the service of all our … END_OF_DOCUMENT_TOKEN_TO_BE_REPLACED 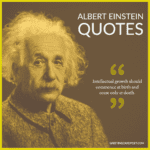 This Albert Einstein Quotes collection features words of wisdom in our Quick Glance format. Einstein won the Nobel Prize for physics in 1921, which made him famous. His theory of relativity shook the physics world, and Einstein’s name became synonymous with genius. Born and raised in Germany, Einstein was targeted by the Nazis because he was Jewish. He moved to the U.S. in 1933 and worked at Princeton University. Below, you’ll find his thoughts on life, education, imagination, and more. … END_OF_DOCUMENT_TOKEN_TO_BE_REPLACED 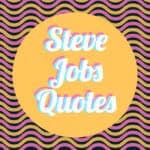 These Steve Jobs quotes have something for everyone. Looking for some inspiration for your business? Check. Do you want a different outlook on innovation and creativity? Covered. How about some words to motivate a team? Jobs has your back here, too. From personal computers to iPhones, from music to digital publishing, Steve Jobs' fingerprints are all over a series of innovations that revolutionized businesses in a variety of fields. The iPhone, the iPad, the iPod, and the iMac were all … END_OF_DOCUMENT_TOKEN_TO_BE_REPLACED 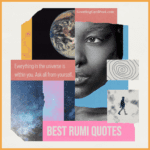 Rumi was a Persian poet who lived in the 13th century. His spiritual lyrics and spiritual couplets have widely influenced literature and thought in the Muslim world and beyond. We hope you enjoy this collection of inspirational Rumi quotes. 15 Best Rumi Quotes 1.) The wound is the place where the light enters you. 2.) If you are irritated by every rub, how will your mirror be polished? 3.) It’s your road and yours alone. Others may walk it with you, but no one can walk it for … END_OF_DOCUMENT_TOKEN_TO_BE_REPLACED 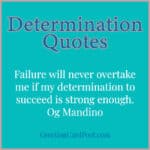 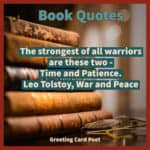 Book quotes from the classics inspire readers of all ages. Authors and writers who have written som the most influential books throughout our history hold a special place in the pantheon of literature. We all love a good read, whether it be a classic or a soon-to-be classic. Here are examples of book quotes from classics in literature written by the greatest authors in history. Best Classic Book Quotes 1. There is one thing, Emma, which a man can always do if he chooses, and that is his … END_OF_DOCUMENT_TOKEN_TO_BE_REPLACED 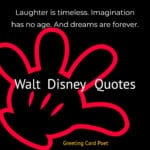 Walt Disney is a name that inspires imagination and creativity in kids and grown-ups alike. Indeed, with that kind of power to influence others, Mr. Disney must have had some inspirational words of wisdom to impart to the world. And he did. Here is a collection of quotes from the founder of Disney himself, Walt Disney. Best Walt Disney Quotes 1. In bad times and good, I have never lost my sense of zest for life. 2. We are not trying to entertain the critics. I’ll take my chances … END_OF_DOCUMENT_TOKEN_TO_BE_REPLACED 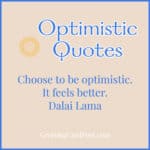 Optimists see the positive side of life. It’s an attitude of an overall positive look on life. Our collection of optimistic quotes may help you feel more positive, expect things to work out, trust good things will happen, and express gratitude. 10 Best Optimistic Quotes 1. We are all in the gutter, but some of us are looking at the stars.Oscar Wilde 2. How wonderful it is that nobody need wait a single moment before starting to improve the world.Anne Frank 3. The optimist looks at … END_OF_DOCUMENT_TOKEN_TO_BE_REPLACED