Looking for the best dad jokes to embarrass your kids? Searching for a one-liner to impress the guys at work? Have you always dreamed of unleashing your inner comic in the world? Well then, do we have the list for you!

This list of the best dad jokes covers all areas of questionable dad humor from corny and awful to downright cringe-worthy. Surely any upstanding father figure and aspiring humorist would be proud to deliver these lines on an unsuspecting audience.

Dad jokes to make them burst out laughing

Check out these awful and awesome dad jokes. Select a few and then try them out on your next victims. They may try not to laugh, but eventually, they will find these jokes irresistible. As they say, remember to always leave them laughing! 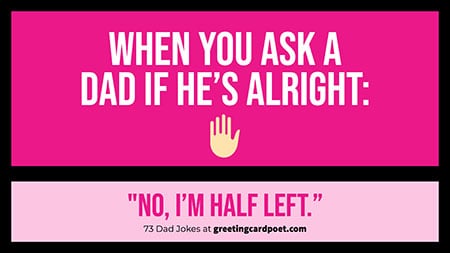 2.) What do you call someone with no body and no nose? Nobody knows. 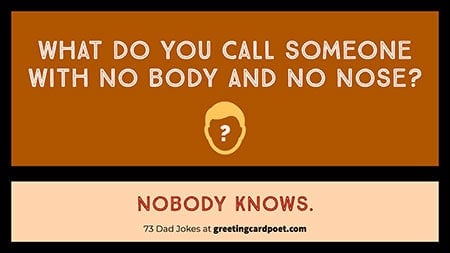 3.) A ham sandwich walks into a bar and orders a beer. The bartender says, “Sorry we don’t serve food here.” 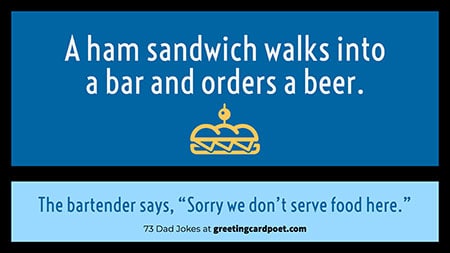 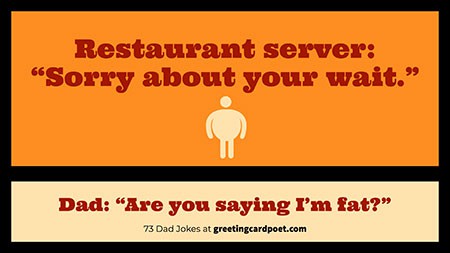 5.) If you see a robbery at an Apple Store does that make you an iWitness? 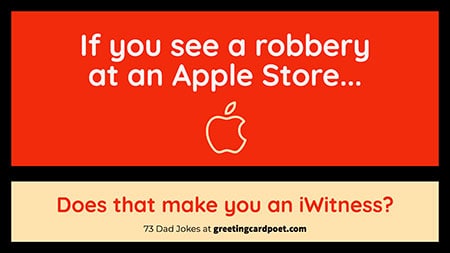 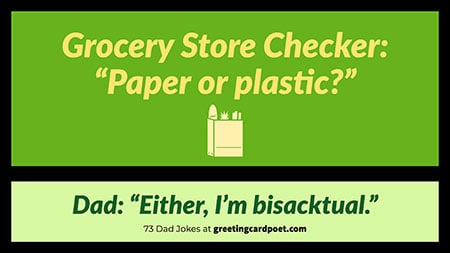 7.) Why do chicken coops only have two doors? Because if they had four, they would be chicken sedans! 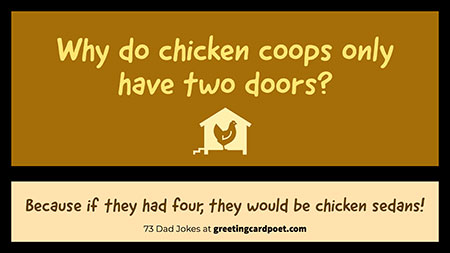 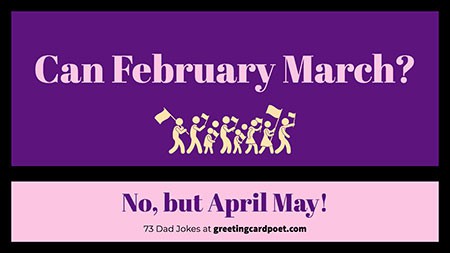 9.) I ordered a chicken and an egg from Amazon. I’ll let you know. 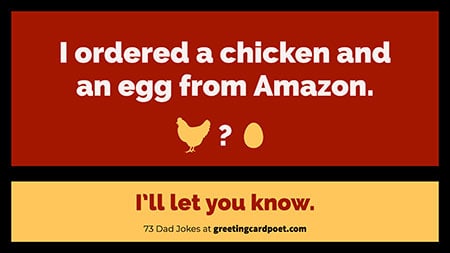 10.) I used to have a job at a calendar factory but I got fired because I took a couple of days off. 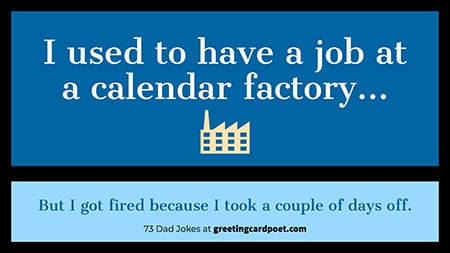 Clean dad jokes you can tell your kids 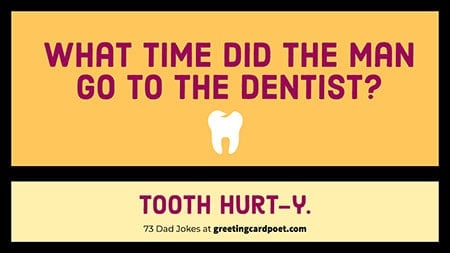 12.) Why did the crab never share? Because he’s shellfish. 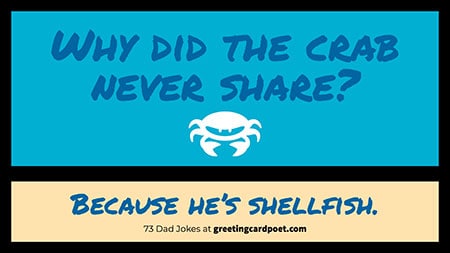 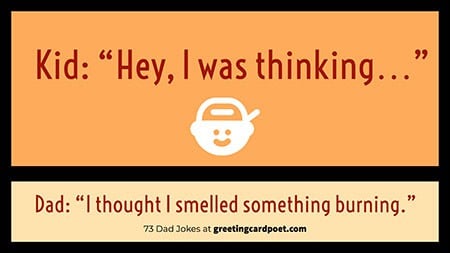 14.) Did you hear about the guy who invented Lifesavers? They say he made a mint. 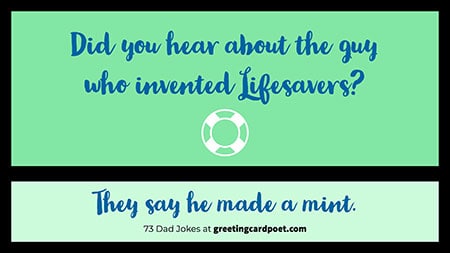 15.) When a dad drives past a cow pasture: LOOK! That cow is OUT-STANDING in his field! 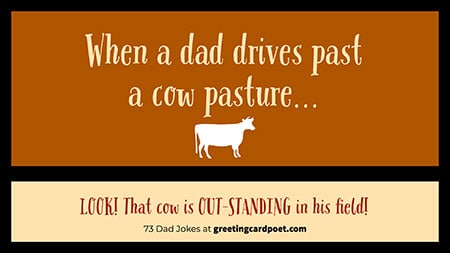 16.) I’m reading a book about anti-gravity. It’s impossible to put down!

19.) What is the least spoken language in the world? Sign language.

21.) I had a dream that I was a muffler last night. I woke up exhausted! 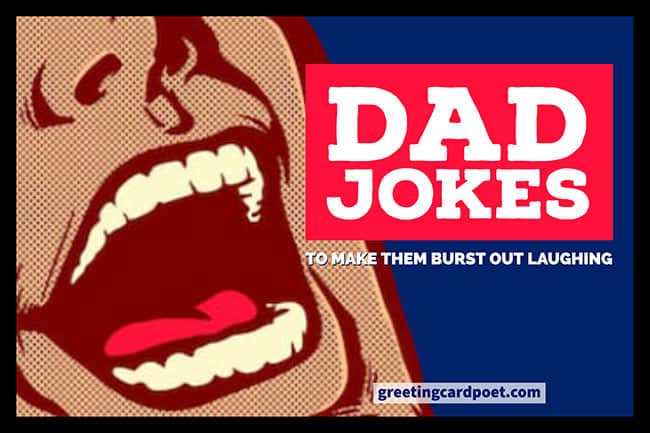 22.) What do prisoners use to call each other? Cell phones.

25.) Why did the Clydesdale give the pony a glass of water? Because he was a little horse!

26.) What do sprinters eat before a race? Nothing, they fast!

27.) Why did the invisible man turn down the job offer? He couldn’t see himself doing it.

28.) Did you hear about the guy who invented Lifesavers? They say he made a mint!

29.) What do Santa’s elves listen to ask they work? Wrap music!

30.) Don’t trust atoms. They make up everything!

31.) The secret service isn’t allowed to yell “Get down!” anymore when the president is about to be attacked. Now they have to yell “Donald, duck!”

32.) What does a zombie vegetarian eat? “GRRRAAAAAIIIINNNNS!”

33.) Did you hear about the restaurant on the moon? Great food, no atmosphere!

35.) I bought some shoes from a drug dealer. I don’t know what he laced them with, but I was tripping all day!

36.) What do sprinters eat before a race? Nothing, they fast!

37.) Did I tell you the time I fell in love during a backflip? I was heels overhead!

39.) Why can’t you hear a pterodactyl go to the bathroom? Because the pee is silent.

41.) Did you know that’s a popular cemetery? Yep, people are just dying to get in there!

42.) How do you make a Kleenex dance? Put a little boogie in it!

43.) What’s the best part about living in Switzerland? I don’t know, but the flag is a big plus.

44.) What do you call a factory that sells passable products? A satisfactory.

46.) What do you call a cow with two legs? Lean beef. If the cow has no legs, then it’s ground beef.

51.) Did you hear the news? FedEx and UPS are merging. They’re going to go by the name Fed-Up from now on.

52.) I know a lot of jokes about retired people but none of them work!

Embarrassing dad jokes to unleash on your family

53.) Why couldn’t the bike stand up by itself? It was two tired.

56.) Two peanuts were walking down the street. One was a salted.

58.) Why do melons have weddings? Because they cantaloupe!

59.) How does a penguin build its house? Igloos it together!

61.) What do you get when you cross an elephant with a rhino? Elephino.

62.) If a child refuses to sleep during nap time, are they guilty of resisting a rest?

63.) The fattest knight at King Arthur’s round table was Sir Cumference. He acquired his size from too much pi.

64.) How many tickles does it take to make an octopus laugh? Ten-tickles.

65.) What did the buffalo say to his son when he dropped him off at school? Bison.

67.) Did you hear about the circus fire? It was in tents!

68.) Want to hear a joke about a piece of paper? Never mind… it’s tearable.

69.) Did you know the first French fries weren’t actually cooked in France? They were cooked in Greece.

70.) Did you hear about the Italian chef who died? He pasta way!

72.) I just watched a documentary about beavers. It was the best dam show I ever saw!

Check out: Most Likely To Game.

74.) I watched a documentary on how ships are kept together. Riveting!

76.) I placed in the sun tanning Olympics. I just got bronze.

77.) Crime in multi-story parking ramps is wrong on so many levels.

79.) Do Transformers get car or life insurance?

80.) Jumper cables walked into a bar. The bartender says, “I’ll serve you but don’t start anything.”

81.) Two antennas meet on a roof, fall in love, and get married. The wedding was good and the reception was brilliant!

82.) A month before he passed away, my grandfather had his back covered in butter. After that, he went downhill fast.

83.) A man just assaulted me with milk, butter, and cream. How dairy!

85.) Do you think it’s wrong that only one company makes the game Monopoly?

Putting your dad jokes telling to the test

Now that you’re armed and ready with the perfect dad joke, here’s what you need to do. Test out your new lines on your kids, nephews, nieces, and grandkids. After all, they are called “dad jokes” for a reason. You’ll get all kinds of reactions from laughter to eye rolls.

Never get caught short-handed. Always have a handful of lines ready for any occasion. Chaperoning the school dance? Perfect! Having the guys over to watch football? Yes! Interrupting your wife’s book club? Bravo! There’s no better time to drop a Dad-licious line for maximum effect.

Greg’s and Mike’s humor was developed from watching great TV shows like Johnny Carson’s Tonight Show, The David Letterman Show, and Saturday Night Live (SNL). And yes, on occasion, they will pull out their dad joke repertoire. Plan your escape routes early if you sit down with them.

Funny Jokes for your Father