These are some of the most hilarious jokes sounds, and trust us when we say that you will be the center of attention! We all share jokes, quotes, and other fun stuff and no matter how funny they are, we never had enough.

Many people like to hear hilarious jokes, but love to share them even more. And a lot of times, the joke itself may not even be funny. Sometimes, it could be the delivery, the situation, or some other factor. So, if you know someone who needs a little chuckle, these jokes are just too dang funny to not laugh at, no matter what your age.

These jokes are so stupid that they will not only guarantee to make you facepalm, but it’ll also make everyone around you laugh out loud at the same time. Don’t believe us? Well go on ahead and read these groaners and try not to crack a smile…or croak!

How do you shoot a killer bee?
With a bee-bee gun.

Why did the barber win the race?
Because he took a short cut.

Why does a Moon-rock taste better than an Earth-rock?
Because it’s a little meteor.

Who lost a herd of elephants?
Big bo-peep.

Why did the rubber chicken cross the road?
She wanted to stretch her legs. 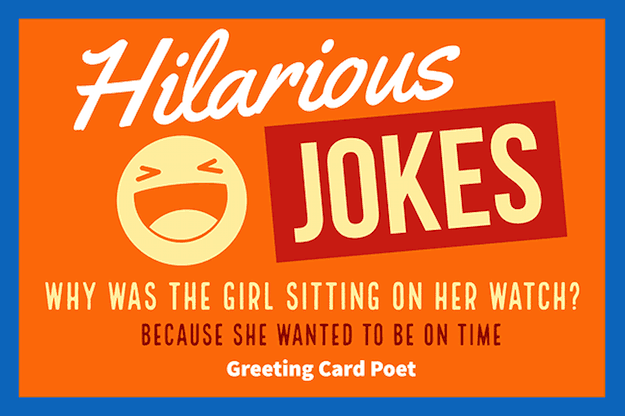 Rolling in the Aisles Laughing Jokes

What did the tornado say to the sports car?
Want to go for a spin?

What road has the most ghosts haunting it?
A dead end.

What do you call the little rivers that flow into the Nile?
Juve-Niles.

What nails do carpenters hate to hit?
Fingernails.

What happened when the magician got mad?
She pulled her hare out.

What kind of rocks are never found in the ocean?
Dry ones.

What did one campfire say to the other?
Shall we go out tonight?

Why did the woman run around her bed?
She wanted to catch up on her sleep.

Hilarious Jokes That Will Make Your Cry

When do monkeys fall from the sky?

What season is it best to go on a trampoline?
Spring time.

What’s bow that can’t be tied?
A rainbow.

What does my dog do when he goes to bed?
He reads a bite-time story.

What do dogs do when watching a DVD?
They press paws.

What does a triceratops sit on?
Its tricera-bottom.

Why can’t dogs drive?
They can’t find a barking space.

How do you make fire with two sticks?
Make sure one is a match.

What kind of table can you eat?
A vege-table. 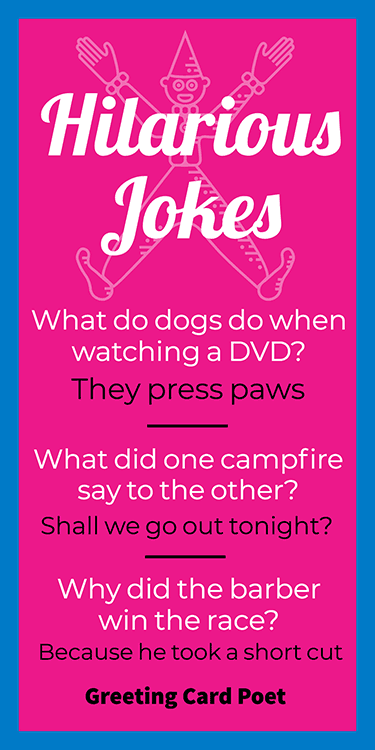 Funny Jokes to tickle the ribs

Why did the girl nibble on her calendar?
She wanted a sundae.

Why did the girl nibble on her calender?
She wanted a sundae.

What do you call a woman who crawls up walls?
Ivy.

Why do hamburgers go to the gym?
To get better buns.

What did the tree wear to the beach party?
Swimming trunks.

What did the dinosaur use to build his house?
A dino-saw.

How is a baseball team similar to a pancake?
They both need a good batter.

Why didn’t the sun go to college?
Because it already had a million degrees.

What kind of tree can you put in your hand?
A palm tree.

How does the barber cut the moon’s hair?
E-clipse it.

What did the chef name his son?
Stew.

What happened when the wheel was invented?
It caused a revolution.

What do librarians take with them when they go fishing?
Bookworms.

Why was the girl sitting on her watch?
Because she wanted to be on time.

When do astronauts eat?
At launch time.

What do lawyers wear to court?
Lawsuits.

What do you call a pig thief?
A hamburglar.

Would octopus make good fast food?
You must be squidding.

The phone rings Green, green!
A woman picks up: Yellow?

What do you call a happy cowboy?
A jolly rancher.

What do you call a flying police officer?
A helicopper.

What is the opposite of a cold front?
A warm back.

How do you get straight A’s?
By using a ruler.

What holds the sun up in the sky?
Sunbeams.

What is a cheerleader’s favorite color?
Yeller.

What is the hardest part of skydiving?
The ground.

What do you call an underwater spy?
James Pond.

What did the dinosaur put on her steak?
Dinosauce.

What dinosaur would Harry Potter be?
The Dinosorcerer.

What did Caesar say to Cleopatra?
Toga-ether we can rule the world.

Facts about the Chuck Norris