Our corny jokes will make you groan at their awful corniness. So, you probably have heard a ton of jokes in your life, but we bet when you hear these you won’t be able to wait to tell it to share with your family and friends. Even if it’s just to see them roll their eyes at how bad your joke is, it’s still funny just to watch their reaction.

Just for your enjoyment, here are some of our favorites listed in many different categories we promise will have everyone in the room hysterically laughing at! Don’t believe us? Go ahead and read them for yourself! Laughter is the best medicine and a very good stress buster and these jokes will destroy the common misconception that jokes are just for kids.

What bone will a dog never eat?
A trombone.

Why are fishermen only on a seafood diet?
Because every time they see food, they eat it.

Did you hear about the guy that lost his left arm and leg in a car crash?
He’s all right now.

What’s a foot long and slippery?
A slipper. 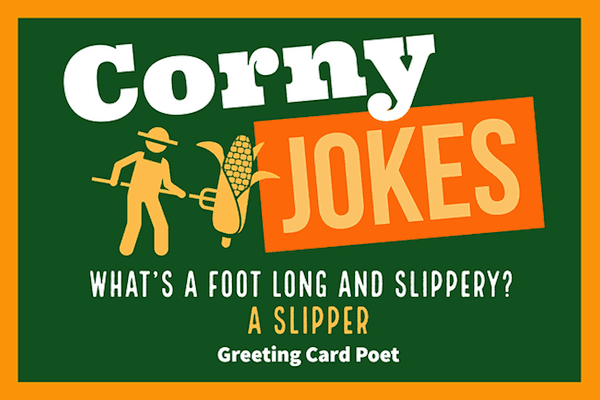 Why does the man tuck his knees into his chest and lean forward to go places?
Because that’s just how he rolls.

What did the coach say to his losing team of snakes?
You can’t venom all.

How do you change tires on a duck?
With a quackerjack.

What do you call cows who give no milk?
Milk duds.

Where did Noah keep his bees?
In the ark hives.

How can a leopard change his spots?
By moving.

Why are meteorologists always nervous?
Their future is always up in the air.

What do you call a dinosaur with a extensive vocabulary?
A thesaurus.

Did you hear about the man who was on trial for feeding his cows dynamite?
The jury said it was a-bomb-in-a-bull.

What did the cake say to the fork?
Want a piece of me.

What’s the most famous creature in the ocean?
The starfish.

What do you call a pile of cats?
A meow-ntain. 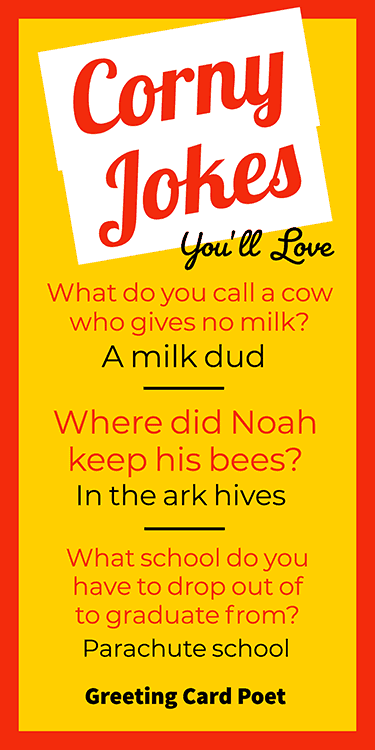 What did the artist say to his girlfriend?
I really love you with all my art.

What kind of girlfriend does a potato wants?
A sweet potato.

What’s green, brown and white and can’t climb a tree?
A fridge in a combat jacket.

What do you call a bomb that doesn’t explode but lands on a cow?
A milk dud.

Why was the bank teller mad that he left his library card?
Because he wasn’t able to check anything out.

Why was the farmer scared to go in his corn field?
Because he feels like he’s being stalked.

Why was the tea cup so into the Earl Grey?
Because he was such a hot-tea.

What school do you have to drop out of to graduate from?
Parachute school.

What’s the best way to force a man to do sit-ups?
Put the remote control between his toes.

When does a duck wake up?
At the quack of dawn.

Why did the bicycle fall over?
Because it was two tired.

What did the hat say to the scarf?
You go ahead, I’ll hang around.

What do you call a pretty ghost?
BOOtiful.

What do you call a row of rabbits hopping away?
A receding hare line.

Why wouldn’t the shrimp share his treasure?
He was a little shellfish.

What’s orange and sounds like a parrot?
A carrot.

Why couldn’t the pirate learn the alphabet?
Because he was always lost at C.

What do you call a magic owl?
Hoodini.

What’s white and can’t climb a tree?
A fridge.

Why are elephants wrinkly?
Have you ever tried to iron one.

What job did the frog have at the hotel?
Bellhop.

Where does the electric cord go to shop?
The outlet mall.

Where do you find giant snails?
On the ends of giant’s fingers.

What’s a three-season bed?
One without a spring.

Why do cows wear cowbells?
Because their horns don’t work.

What goes under your feet and over your head?
A jump rope.

What would you call a humorous knee?
Fun-ny.

What goes on and on and has an i in the middle?
An onion.

What did the alien say when he was out of room?
I’m all spaced out.

How much does a Mustang cost?
More than you can af-Ford.

Why is corn such a good listener?
Because it’s all ears.

Why shouldn’t you play cards on the savannah?
Because of all the cheetahs.

Why could the bee not hear what people were saying?
He had wax in his ears.

Why did the pig get hired at the restaurant?
He was really good at bacon.

How did the pirate stop smoking?
He used the patch.

What did the triangle say to the circle?
You’re pointless.

What kind of crackers do firemen like in their soup?
Firecrackers.

What did the green grape say to the purple grape?
Breathe, just breathe.

I told my doctor it hurts when I do this.
He said, “don’t do that.”

What did the finger say to the thumb?
“I’m in glove with you.”

Why do bees hum?
Because they don’t know the words.

A horse walks into a bar and the bartender says “hey.”
And the horse says “Sure.”

How do celebrities stay cool?
They have lots of fans.

Why wouldn’t the lobster share his toys?
Because he was shellfish.

What do you call birds who all stick together?
Vel-crows.

I have an addiction to cheddar cheese.
But, it’s only mild.

Why can’t your nose be 12 inches long?
Because then it would be a foot.

Did you hear about the circus fire?
It was in tents.

Have you heard about the corduroy pillow?
It’s making headlines.

Why did the jaguar eat the tightrope walker?
It was craving a well-balanced meal.

What did the big bucket say to the smaller one?
Looking a little pail there.

Why do chicken coups always have two doors?
With four, they’d be chicken sedans.

What did one hat say to the other?
You stay here. I’ll go on ahead.

What do you call a pooch living in Alaska?
A chilly dog.

What do sea monsters eat?
Fish and ships.

Have you heard the joke about the butter?
I better not tell, it might spread.

In what school do you learn how to greet people?
Hi school.

What is the quietest kind of a dog?
A hush puppy.

What did Tennessee?
The same thing Arkansas.

What do you call a scared train
A fright train.

What did the belly button say just before it left?
I’m outtie here.

What kind of potato chips fly?
Plane ones.

How did the butcher introduce his wife?
Meet Patty.

Where do you put barking dogs?
In a barking lot.

Compiled by Tim, who enjoys any well-intended joke on occasion. Tim is a freelance writer, creative director and former greeting card writer.