These humorous jokes are not just funny, they are bound to make you laugh for a long time. It’s no doubt that laughing is a great way to connect with family, friends, and loved ones and you can be sure to find some of these are real gems. Jokes, especially really humorous ones, not only makes us laugh but offer many benefits that positively impact bodies and minds.

Humor At Its Best

We guarantee that the next time you’ve got an audience to impress, these jokes are sure to have everyone cracking up. So, if you’re in need of a laugh, or are looking for something fun to add to your text message, email signature, or card, try using one of these funny jokes.

How can you tell a good snack from a bad one?
The good one always comes through when the chips are down.

Did you hear about the guy who invented Lifesavers?
They say he made a mint.

How do you make anti-freeze?
Take away her blanket.

What does a martial arts expert drink?
Kara-tea.

What do you call a crab that plays baseball?
A pinch hitter.

Why can’t a bicycle stand up by itself?
Because it’s two-tyred.

Not all math puns are bad.
Just sum. 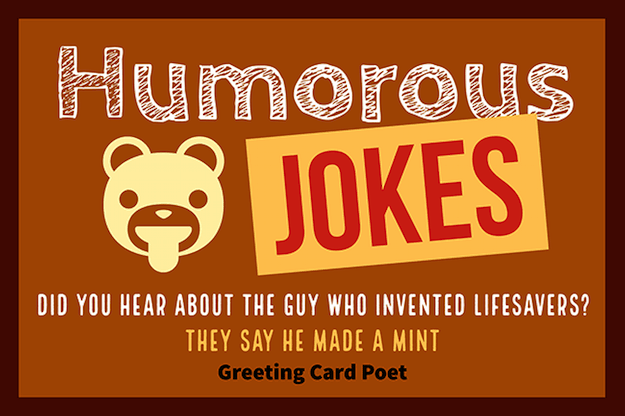 My girlfriend says I’m hopeless at fixing appliances.
Well, she’s in for a shock.

My friend has got a butler who only has one arm.
Serves him right.

My favorite color is purple.
I like it more than blue and red combined.

A man showed up for a duel armed only with a pencil and paper.
He then proceeded to draw his weapon.

How did the beaver get online?
He logged on.

Why did the one-handed man cross the road?
To get to the second-hand shop.

If you take your watch to be fixed, make sure you don’t pay upfront.
Wait until the time is right.

Many people assume that humor is anything that causes laughter, but the important thing to remember is that humor comes in many forms. There really is no universally agreed-on definition of it, but simply put it’s mostly anything that relaxes the body, gets people to breathe, causes a smile, or elicits happiness is humor.

What was the average age of a caveman?
Stone Age.

Patient: Doctor, I get a strong stinging feeling in my eyes every time I eat a birthday cake.
Doctor: Next time, blow out the candles.

From a certain age, birthdays are like a reverse countdown.

Knock, knock.
Who’s there?
Abby.
Abby who?
Well, Abby Birthday to you.

What do you say to a kangaroo on its birthday?
Hoppy Birthday.

What is it about birthdays that make kangaroos unhappy?
They only get to celebrate them in leap years.

What sort of birthday cake should you eat during Halloween?
I Scream Cake.

What goes up and never comes down?
Your Age.

Why do we put candles on the top of birthday cakes?
Because it’s too hard to put them on the bottom.

What do you always get on your birthday?
Another year older.

When’s your birthday?
July 23rd.
What year?
Every year.

Did you hear about the power outage at the college library?
Forty students were stuck on the escalator for three hours.

What do my college’s football team and pot have in common?
They both get smoked in bowls.

What does the average student at one college get on his SAT?
Drool.

What’s the definition of an optimist?
A college student who opens his wallet and expects to find the money.

What kind of ships do students study on?
Scholarships.

Why was the geometry class always tired?
Because they were all out of shape.

A computer once beat me at chess, but it was no match for me at kickboxing.

As long as there are tests, there will be prayer in colleges.

Who’s the king of the classroom?
The ruler.

Why was school easier for cave people?
Because there was no history to study.

Why did the boy study on an airplane?
Because he wanted to get a higher education.

I was caught studying the periodic table in English class…it was an elementary mistake.

What did the buffalo say to his son when he left for college?
Bison.

What did the pencil sharpener say to the pencil?
Stop going in circles and get to the point. 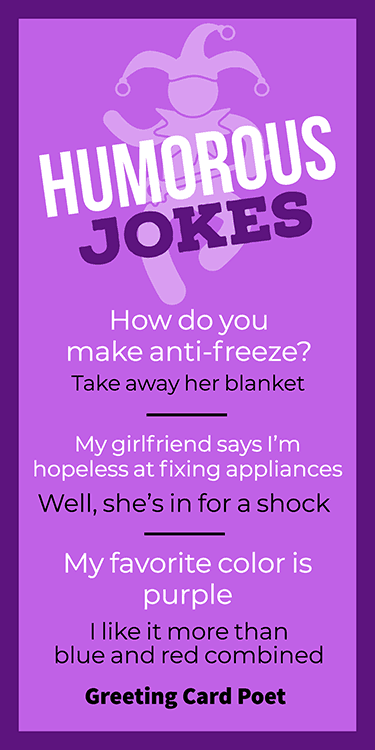 Why are gravediggers overweight?
Due to their cemetery lifestyle.

Why did the old lady go to jail?

Because she stole a kilt and plaid guilty.

Cleaning mud can lead to a life of grime. It’s a slippery slop.

What do you call someone who steals flip flops?
A cleft-toe maniac.

Don’t touch my elbow. Do it and I’ll have you charged with arm rubbery.

Setting fire to a cemetery is an act of tomb fuellery.

The mattress thief was cot in the act, bed-handed.

What did the kid do when his scooter got stolen?
He moped.

Which way did the computer programmer go?
He went data way.

Why was the JavaScript developer sad?
Because he didn’t Node how to Express himself.

Why do Java developers wear glasses?
Because they can’t C#.

Why did the developer go broke?
Because he used up all his cache.

What’s the best way to get by in the computer class?
Bit by bit.

Why did the computer spy quit?
He couldn’t hack it anymore.

What does a computer programmer eat for lunch?
An apple.

Why did IBM and Apple computers get a divorce?
They weren’t compatible.

How did computers buy a new car?
They all chipped in.

Where are delinquent disk drives sent?
To boot camp.

How do you find a spider on the internet?
Check out his web site.

Why did the maid refuse to clean the computer?
She didn’t do Windows.

Change is inevitable, except from a vending machine.

Money talks…but all mine ever says is good-bye.

How do you keep your dreams alive?
By hitting the snooze button.

I bet you I could stop gambling.

With a calendar, your days are numbered.

Laugh and the world laughs with you. Snore and you sleep alone

If you need so much space, there’s always NASA.

How do crazy people go through the forest?
They take the psycho path.

What kind of coffee was served on the Titanic?
Sanka.

I was wondering why the baseball coming towards me was getting bigger…then it hit me.

Did you hear about the guy who got hit in the head with a can of soda?
He’s lucky it was a soft drink.

A small boy swallowed some coins and was taken to the hospital.
When his grandmother called the doctor to ask how he was doing, he said, ‘no change yet.”

I did a theoretical play on puns…really it was just a play on words.

If towels could tell jokes they would probably have a dry sense of humor.

If a parsley farmer is sued, can they garnish his wages?

Molly is a writer based in Orlando, Florida.