So what are some hard tongue twisters you’ve ever tried to say? This list of challenging lines is sure to vex you verbally and test your tongue and twist your tonsils.

Just start off with something simple, like a short tongue twister and say it three times slowly. Let your lips warm-up and focus your mind. Then progress to tougher and tougher twisters, speed up the pace and push the limits of your verbal dexterity. See how many your mandible can master!

Another tough twister is “pad kid poured curd pulled cold.” In fact, researchers at MIT (the Massachusetts Institute of Technology) led by psychologist Stefanie Shattuck-Hufnagel contend that this line is the toughest twister ever created. The difficulty comes when the line is repeated rapidly in succession. The exercise left some tongue-tied test participants speechless. 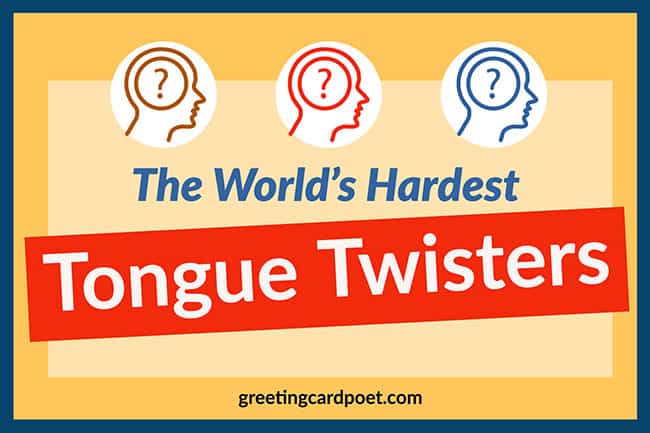 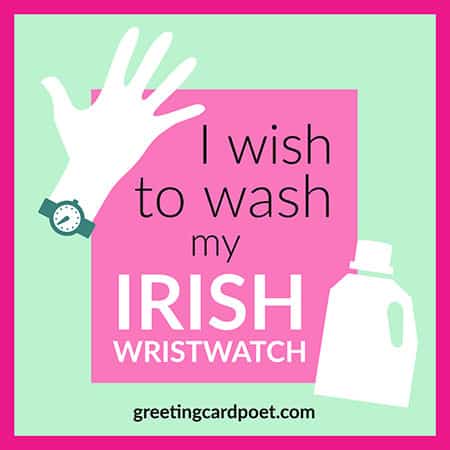 24.) I wish to wash my Irish wristwatch.

27.) Rory the warrior and Roger the worrier were reared wrongly in a rural brewery.

32.) I thought I thought of thinking of thanking you. 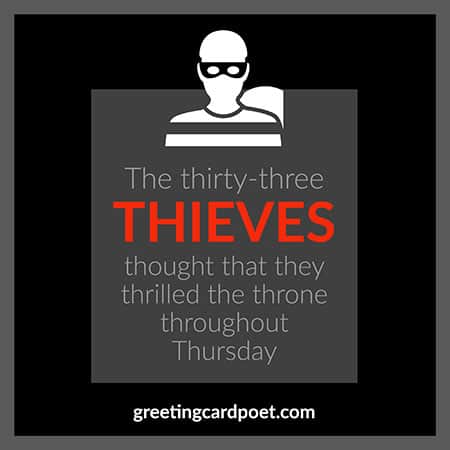 38.) Susie works in a shoeshine shop. Where she shines she sits, and where she sits she shines.

42.) Roofs of mushrooms rarely mush too much.

44.) The thirty-three thieves thought that they thrilled the throne throughout Thursday.

48.) Round the rugged rock, the ragged rascal ran. 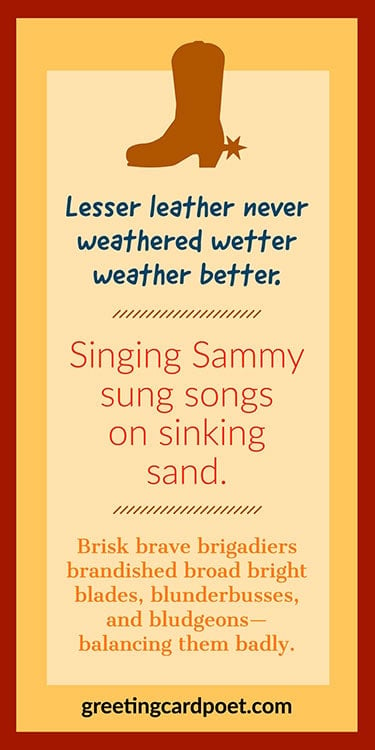 50.) I saw a kitten eating chicken in the kitchen.

51.) We surely shall see the sunshine soon.

61.) If a dog chews shoes, whose shoes does he choose?

66.) The Leith Police dismisseth us.

67.) Are you copper bottoming those pans, my man? No, I’m aluminuming ’em Ma’am.

68.) There those thousand thinkers were thinking how did the other three thieves go through.

71.) The 33 thieves thought that they thrilled the throne throughout Thursday.

73.) She sat upon a balcony, inexplicably mimicking him hiccupping, whilst amicably welcoming him in. 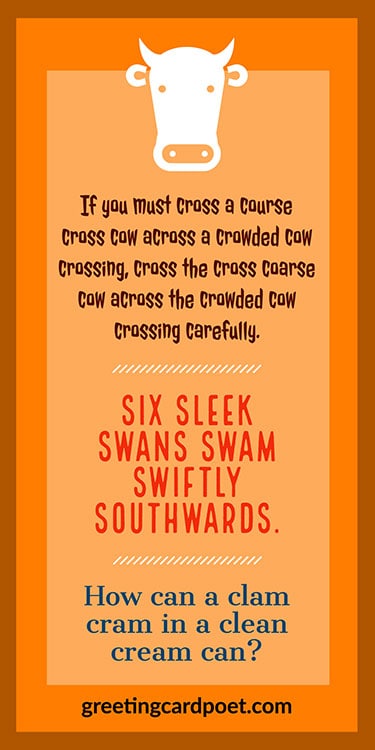 75.) A synonym for cinnamon is a cinnamon synonym.

80.) Something in a thirty-acre thermal thicket of thorns and thistles thumped and thundered threatening the three-D thoughts of Matthew the thug – although, theatrically, it was only the thirteen-thousand thistles and thorns through the underneath of his thigh that the thirty-year-old thug thought of that morning.

82.) Mr. Tongue Twister tried to train his tongue to twist and turn, and twit a twat, to learn the letter “T”.

85.) There was a fisherman named Fisher

who fished for some fish in a fissure.

Till a fish with a grin,

pulled the fisherman in.

Thrust three thousand thistles through the thick of his thumb,

See that thou, while sifting a sieve-full of unsifted thistles,

Thrust not three thousand thistles through the thick of thy thumb.

While these fleas flew, a freezy breeze blew.

That’s what made these three free fleas sneeze.

In a pestilential prison, with a life-long lock,

Awaiting the sensation of a short, sharp shock,

From a cheap and chippy chopper on a big black block!

Sheep should sleep in a shed.

Two-two was one too.

Two-two won one too.

Said the two to the tutor

“Is it tougher to toot

Or to tutor two tooters to toot?”

With his bat, Bob banged the ball

Banged it bumps against the wall

But so boldly Bobby banged it

That he burst his rubber ball

Now to drown his many troubles

98.) If two witches were watching two watches, which witch would watch witch?

99.) Betty Botter bought some butter; “But,” said she, “this butter’s bitter!

101.) I saw a kitten eating chicken in the kitchen.

Note: Are we missing any of the hardest tongue twisters? Let us know your favorites via the Contact page.

Training your tongue to talk without tripping

Like everything in this world it seems, practice makes perfect. Repeat each line slowly and concentrate on enunciating each syllable before moving on to the next word. Now begin to speed up your cadence, until you are able to repeat the twister three times without error.

Make a game of it! Challenge your friends on who can repeat the lines the fastest without messing up. You’ll be surprised at the strange word combinations your brain can get tricked into creating. Great for big laughs at any social gathering like parties and game night.

Juggling jocularity is just one thing that Johnson does on a regular basis. He’s also a top-notch designer, director, and dynamic fisherman.