These funny tongue twisters are good for a laugh, challenging to repeat and just plain fun! Test your verbal ability and see if you can say these lines quickly without fumbling the words or breaking out in laughter.

These lines are fun to repeat and the faster you go, the harder it gets. Best of all, they are amusing and will bring a smile to anyone trying to master them.

1.) He thrusts his fists against the posts and still insists he sees the ghosts.

4.) The batter with the butter is the batter that is better!

5.) If colored caterpillars could change their colors constantly, could they keep their colored coat colored properly?

6.) The thirty-three thieves thought that they thrilled the throne throughout Thursday.

7.) Susie works in a shoeshine shop. Where she shines she sits, and where she sits she shines.

8.) Chester the Cheetah chews a chunk of cheap cheddar cheese. 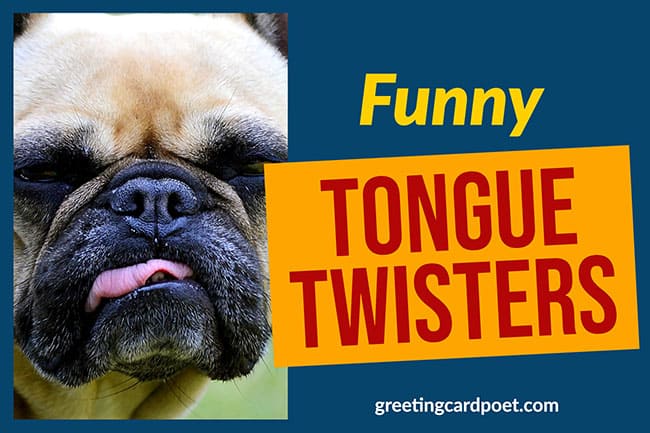 18.) Round and round the rugged rock the ragged rascal ran.

20.) Give papa a cup of proper coffee in a copper coffee cup.

24.) The winkle ship sank and the shrimp ship swam.

25.) If a dog chews shoes, whose shoes does he choose?

26.) There was a minimum of cinnamon in the aluminum pan.

Check out even more: 185 Tongue Twisters. 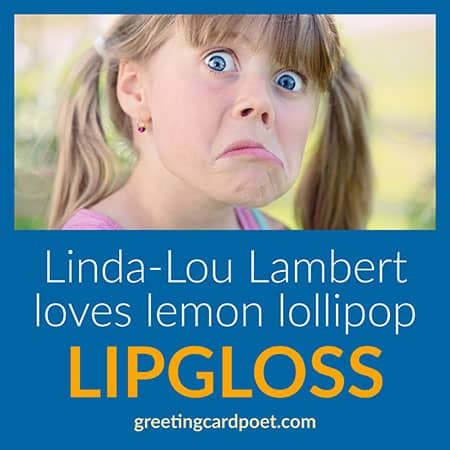 34.) She sells seashells by the seashore.

If Peter Piper picked a peck of pickled peppers

How many pickled peppers did Peter Piper pick?

39.) How much wood would a woodchuck chuck

If a woodchuck would chuck wood?

A woodchuck would chuck all the wood he could chuck

If a woodchuck would chuck wood.

45.) Elizabeth has eleven elves in her elm tree.

52.) Ann and Andy’s anniversary is in April.

53.) Supposed to be pistachio.

65.) I saw a kitten eating chicken in the kitchen.

73.) Eddie edited it so get the edit from Eddie.

80.) A synonym for cinnamon is a cinnamon synonym.

83.) But she as far surpasseth Sycorax, as greatest does least.

85.) A rough-coated, dough-faced, thoughtful plowman strode through the streets of Scarborough; after falling into a slough, he coughed and hiccoughed.

87.) Many an anemone sees an enemy anemone.

88.) She stood on the balcony, inexplicably mimicking him hiccuping, and amicably welcoming him in.

94.) A slimy snake slithered through the sandy Sahara.

98.) There those thousand thinkers were thinking how did the other three thieves go through.

100.) Thirty-three thousand people think that Thursday is their thirtieth birthday.

106.) No need to light a night-light on a light night like tonight.

110.) Rory the warrior and Roger the worrier were reared wrongly in a rural brewery.

114.) When she writes copy she has the right to copyright the copy she writes.

115.) How much caramel can a canny canon ball cram in a camel if a canny cannonball can cram caramel in a camel?

117.) Love’s a feeling you feel when you feel you’re going to feel the feeling you’ve never felt before.

Said the fly “Oh what should we do”

Said the flea” Let us fly

And said the fly”Let us flee”

So they flew through a flaw in the flue.

And Mr. Soar owned a seesaw.

Which made Soar sore.

See’s saw would not have sawed

But it was sad to see Soar so sore

So it is better to be Shott than Nott.

Some say Nott was not shot.

But Shott says he shot Nott.

Either the shot Shott shot at Nott was not shot, or Nott was shot.

If the shot Shott shot Nott, Nott was shot.

However, the shot Shott shot not Shott – but Nott.

So, Ed Nott was shot and that’s hot! Is it not?

Said the two to the tutor

“Is it tougher to toot

Or to tutor two tooters to toot?”

What the minister’s fee be

Before Phoebe be Phoebe Beebee.”

Who lived up in a tree.

He was a two-toed tree toad

But a three-toed toad was she.

For the two-toed tree toad loved the ground

That the three-toed tree toad trod.

But the two-toed tree toad tried in vain.

He couldn’t please her whim.

From her tree toad bower

With her three-toed power

Sheep should sleep in a shed.

and she has a sieve of sifted thistles,

and a sieve of unsifted thistles,

& the sieve of unsifted thistles

she sieves into the sieve of sifted thistles.

because she is a thistle sifter.

131.) If one doctor doctors another doctor

Or does the doctor doctor the way

The doctor who doctors doctors?

A Hottentot tot to talk

Ere the tot could totter,

Ought the Hottentot tot

Be taught to say ought or naught

Or what ought to be taught ‘er?

I never felt a piece of felt

Which felt as fine as that felt felt,

When first I felt that felt hat’s felt.

The stump thought the skunk stunk.

The skunk thought the stump stunk.

What stunk the skunk or the stump?

For a night-light’s light’s a slight light,

And tonight’s a night that’s light.

It is really not quite right

To light night-lights with their slight lights

Ones to make you chuckle

As he gobbled the cakes on his plate, the greedy ape said as he ate, the greener green grapes are, the keener keen apes are to gobble green grape cakes, they’re great!

And fed forty feet to his friend Frank

How many feet of fruit did Freaky Fred find?

139.) Did Dick Pickens prick his pinkie

Pickling cheap cling peaches in an inch of Pinch

Bear down upon a hare.

When bare of hair he strips the hare,

Right there I cry, “Forbear!”

What annoys an oyster?

Any noise annoys an oyster,

But a noisy noise annoys an oyster most.

143.) Dr. Johnson and Mr. Johnson, after great consideration, came to the conclusion that the Indian nation beyond the Indian Ocean is back in education because the chief occupation is cultivation.

How to use these funny tongue twisters

This list contains tongue twisters of all levels and for all ages. Commit a few to memory so you can spring them on your friends for a laugh at the right moment.

Or you can create a game where participants have to say the twister as fast as possible without tripping their tongue. It’s harder than you think and produces some hilarious garbled-up words that will keep everyone in stitches!

Going on a long car ride? These are fun for folks of all ages. Have one person start and then pass it around. See who does best. And, determine who is the funniest. Or, play a game where the first to laugh loses. Keep it light and keep it fun for everyone!

When not compiling funny tongue twisters or writing other articles, Greg can be found working on designs and fishing for muskie in his native Minnesota.