Cheesy jokes are for everyone and we promise no matter how tough you think you are, there are jokes that will make you crack. You cannot put a price on a good sense of humor and right up there with dry humor, slapstick is our favorite! The ability to find the funny side in everything is a rare and priceless gift and we elaborate to provide you the best jokes with playful wordplay. If delivered with enough enthusiasm, these are sure to get you a few or maybe more chuckles.

Jokes go a long way. Not only are they good for the soul, but they help people bond with others in a really fun way, so if you’re looking to tickle your funny bone, look no further than this great list.

What is an astronaut’s favorite place on a computer?
The Space bar.

Why did the banana split?
Because it saw the ginger snap.

Which month do soldiers hate most?
March.

What starts with a P, ends with an E, and has a million letters in it?
Post Office.

What runs but doesn’t get anywhere?
A refrigerator.

I ate a clownfish last night.
It tasted funny. 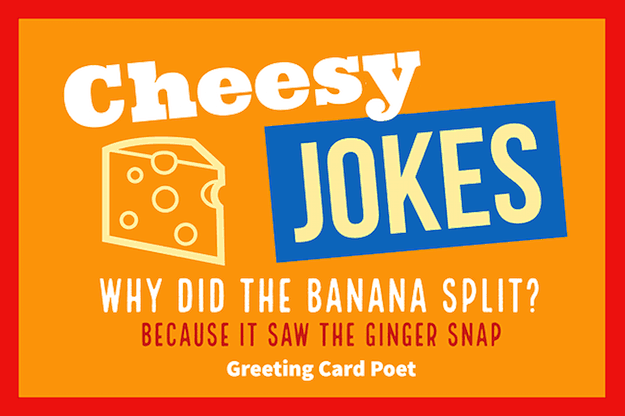 When does a joke become a dad joke?
When the punch line is a parent.

What did the judge say to the dentist?
Do you swear to pull the tooth, the whole tooth and nothing but the tooth?

What did the worker at the rubber band factory say when he lost his job?
Oh, snap.

What do you get when you cross a smurf and a cow?
Blue cheese.

What is an elf’s favorite type of music?
Wrap.

Why did the sea monster eat five ships that were carrying potatoes?
No one can eat just one potato ship.

Check out our Best Corny Jokes – a close relative to Cheesy.

How do you impress a baker when you’re taking his daughter on a date?
Bring her flours.

Why did the yogurt go to the art exhibit?
Because it was cultured.

Where do cows hang their paintings?
In the mooo-seum.

Why did the can crusher quit his job?
Because it was soda pressing.

What do bees do if they want to use public transport?
Wait at a buzz stop.

What can you serve but never eat?
A volleyball.

Why did the traffic light turn red?
You would too if you had to change in the middle of the street.

How do bees get to school?
They take the school buzz.

When is a car not a car?
When it turns into a garage.

What did Delaware?
A New Jersey.

Try out our goofy jokes for kids page.

How do snails fight?
They slug it out.

Why did Johnny throw the clock out the window?
Because he wanted to see time fly.

Why did the man put money in his freezer?
He wanted some cold hard cash!

Check out these awesome tongue twisters for kids.

Why did the robber take a bath?
Because he wanted to make a clean getaway.

Why do bananas wear suntan lotion?
Because they peel.

Have any cheesy jokes for this page? Let us know via the contact page. 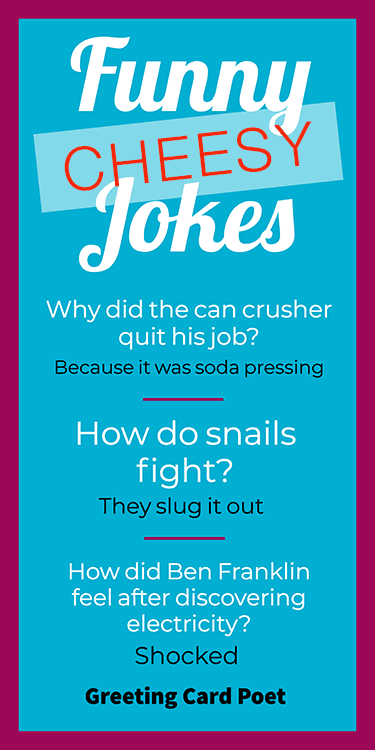 Which Disney princess is a cow’s favorite?
Mulan.

Why is there a gate around cemeteries?
People are dying to get in!

How did Ben Franklin feel after discovering electricity?
Shocked.

Why do people love the way the earth rotates?
Because it really makes their day.

Why did the poor man sell yeast?
To raise some dough.

What kind of shoes do all spies wear?
Sneakers

Why aren’t koalas actual bears?
Because they don’t meet the koalafications.

Why did the cookies admit himself to the hospital?
Because he felt crummy. Check out more cookie jokes.

What kind of tea is hard to swallow?
Reality.

What do you call an unpredictable, out of control photographer?
A loose Canon.

What did one eye say to the other eye?
Don’t look now, but something between us smells.

Why can’t your nose be 12 inches long?
Because then it would be a foot.

What did the man say to the wall?
One more crack like that and I’ll plaster ya!

Why don’t skeletons fight each other?
They don’t have the guts.

Where do all the letters sleep?
In the alphabed.

Why did the scarecrow win an award?
Because he was out-standing in his field.

What did Gorgonzola say to Cheddar?
Looking sharp.

When should you go on a cheese diet?
If you need to cheddar a few pounds.

Why does cheese look sane?
Because everything else on the plate is crackers.

What do you call a cheese factory in the Middle East?
Cheeses of Nazareth.

Why did the Greek woman stop eating cheese?
Because she was getting Feta and Feta.

What is a basketball player’s favorite kind of cheese?
Swish cheese.

Stupid is as Stupid Does

Why did the man ask the woman if her dad was a boxer?
Cause he said she’s a knockout.

Why did the girl fall in love with the robber?

Because he stole her heart.

Why do people love bananas so much?
Because they are so a-peeling.

What did the bank teller say to the lovely woman?
Can I take you out on a date, because you’ve got my interest?

What did the oven say to the baked cookie?
You’re so hot.

What did the smitten vinegar say to the baking soda?
You make me feel all bubbly inside.

What did one sock say to the other sock in the hospital?
Don’t worry, I will be with you every step of the way.

What do herb gardeners get for good work?
Thyme and a half.

How much does the mathematician like angles?
To a certain degree.

How do you fix a broken brass instrument?
With a tuba glue.

What do you call a group of musical killer whales?
An Orca-stra.

Why should you always tie your shoes on Valentine’s Day?
Because if not, you’ll be falling for everybody.

Why was the omelet so happy?
Because it was egg-cited to see the frying pan.

Why should you ever trust a pencil?
Because it can erase your past and write our future.

Why did the female shirt fall for the male shirt?
Because he was made of boyfriend material.

How do you repair a broken jack-o-lantern?
With a pumpkin patch.

What did the crowd tell the comedian who had terrible police jokes?
Give it arrest.

Why can’t dogs operate an MRI machine?
Because only cats can.

Why did the apricot invite the prune to the dance?
Because he couldn’t find a date.

How is your long-distance relationship going?
So far so good.

Why did the cow go in the spaceship?
It wanted to see the mooooooon.

What do you call a salad dressing wearing shades?
A cool ranch.

Why did the baseball player bring a rope to the game?
He wanted to tie the score.

My sister bet me $100 I couldn’t build a car out of pasta.
You should’ve seen the look on his face when I drove pasta.

You’re on the Cheesy Jokes page.

What Do You Call Jokes