Hit your stride with these dad jokes. They’re too good not to share! Sometimes, fathers can say the darndest things. But, in the big picture, there’s still something really comforting about their type of corny humor. Grimace if needed, groan if you can’t keep it inside, but ultimately you probably love the effort. Look, he’s trying to make you smile even if he fails 90% of the time.

Enjoy these. You’re certain to enjoy a few chuckles (and groans) by the time you get to the end.

Dad jokes require a certain level of finesse, but these jokes roll off the tongue with little effort. After all, they combine a level of wordplay and pun mastery that few people can pull off, so enjoy!

Why did the stadium get hot after the game?
All of the fans left.

What did the dad say when his son asked if he got a haircut?
He said, no I got them all cut.

What happened when the boy asked if his dad could put his shoes on?
He said, no, he doesn’t think they’ll fit him. 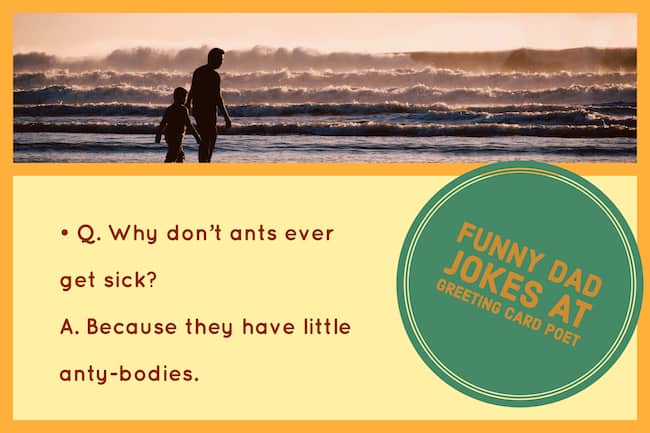 Which U.S. state has the smallest soft drinks?
Mini-soda.

Why did the man stop his origami business?
Because it folded.

Why did the man hate the movie about the earthquake?
Because it had so many faults.

What did the girl say when she dropped her piece of gum on the floor?
I guess it wasn’t mint to be.

Why did the dad tell his family to avoid sushi?
Because he said that it was a little fishy.

Want to hear a joke about paper?
Nevermind, I won’t tell it because it’s just tearable.

Did you hear about the restaurant on the moon?
It has really great food, but there’s no atmosphere.

Why did the cookie cry?
Because his father was a wafer so long.

How do hair stylists speed up their job?
They take short cuts.

What is a boxer’s favorite drink?
Punch. 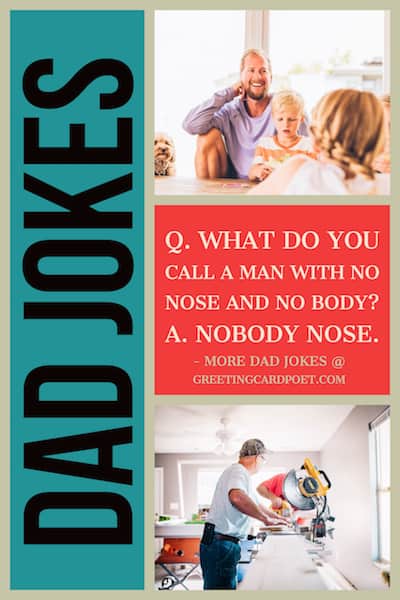 What is a dad’s favorite thing to eat at the movies?
Popcorn.

Why couldn’t the kid stop reading the book about anti-gravity?
Because he said that it was impossible to put down.

What’s the opposite of irony?
Wrinkly.

What did the man say in the elevator about the operator?
This job really has its ups and downs.

Why didn’t the comedian share his chemistry joke?
Because he was afraid he wouldn’t get a reaction.

Why don’t fathers wear sunglasses?
Because they only wear dad glasses.

Check out: Bad Jokes From Fathers. 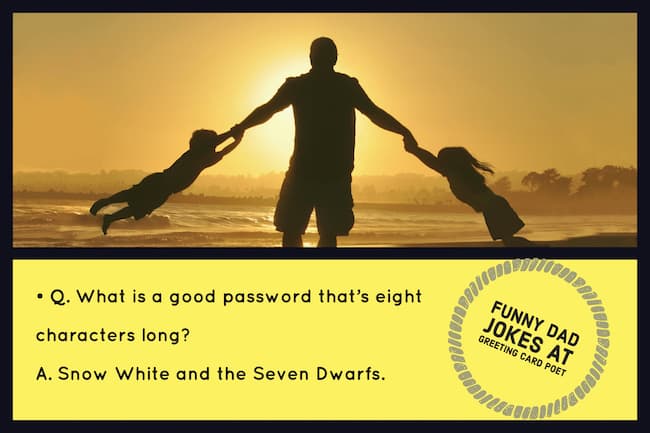 What kind of shoes does a thief wear?
Sneakers.

What did the bartender say to the jumper cable at the bar?
I’ll serve you, but don’t start anything.

What did the woman leave the seafood disco last week?
Because she pulled a mussel.

Where can you get chicken broth in bulk?
The stock market.

What do you call a man with no nose and nobody?
Nobody nose.

What did the man say about his sick cat?
He doesn’t think it’s feline well.

Why do we need geometry?
Because life is pointless without it.

How can you tell that a train just went by?
It leaves its tracks.

Great, Corny Jokes.  Is that an oxymoron?

Why couldn’t the woman ever lose weight?
Because she said it keeps finding her.

Why is the athlete playing soccer?
Because he’s just doing it for kicks.

Why did the man stop working his job at a shoe recycling shop?
Because it was sole destroying.

Where did the one-legged waitress work?
At IHOP.

What happened when the two antennas got married?
They had a great wedding and reception.

Why didn’t the man get any camouflage trousers the other day?
Because he couldn’t find any.

What do you call a belt with a watch on it?
A waist of time.

What did the boat say to the pier?
What’s up, dock?

Why did the cucumber call 911?
It was in a pickle.

What did the mountain climber name his son?
Cliff.

What happened when the boy asked his dad to make him a sandwich?
His dad said, poof, now you’re a sandwich.

How do you make a steak pun?
Medium well done.

Why is milk the fastest liquid on earth?
It’s pasteurized before you even see it.

Why don’t ants ever get sick?
Because they have little anty-bodies.

What do you call a poppa candy?
A sugar daddy.

What did the light bulb say to its mother?
I wuv you watts and watts.

How much did the man charge for his batteries today?
Nothing, they were free of charge.

How many apples grow on a tree?
All of them.

What did the painter say to the wall?
Don’t worry, I got you covered.

What do you get when you cross a mouse with a squid?
An eektopus.

How does a penguin build its house?
Igloos it together.

What is a good password that’s eight characters long?
Snow White and the Seven Dwarfs.

What’s the advantage of living in Switzerland?
The flag is a big plus.

What did daddy spider say to baby spider?
You spend too much time on the web.

If you were a vegetable you’d be a cute-cumber.

I got so angry the other day when I couldn’t find my stress ball.

Every night at 11:11, I make a wish that someone will come to fix my broken clock.

I’m not indecisive, unless you want me to be.

I once walked in on my parents while they were in bed. But they were asleep, so I left.

I want to see something with the clothed eye.

Pennies are a dime a dozen.

From my point of view, all I can see is a point.

I once saw a court stenographer transcribe a mime’s testimony.

I once painted a self-portrait of someone else.

I’m just itching to tell you about my allergies.

On the sunny side of the street, it’s a little bit warmer.

I once found a needle beside a haystack.

Mike is the father of four, an author, and founder of Greeting Card Poet.