Puns for kids include jokes with a special wordplay combination that requires little to no explanation from parents. Why are they so great you ask? Well, because not only do they help expand a child’s vocabulary and thinking abilities, but they are also especially useful if you want to teach your kid something new in a fun way.

Kids are natural comedians anyways, so why not join in on the comedy and challenge their minds with a few clever one-liners? Below you’ll find a huge selection to share with everyone!

Jump to any category on this page by using the links below, or simply scroll down to see them all.

If your dog was craving a pizza, what type of pizza would he/she want?
Puperoni.

What does a pizza say when it introduces itself to you?
Slice to meet you.

What does the baker always say to customers?
Do you oven come here?

Why were the pizza vegetables upset?
Because there wasn’t a mushroom.

How do you fix a broken pizza?
With tomato paste.

What did the pizza say to the gorgeous topping?
I never SAUsage a beautiful face! 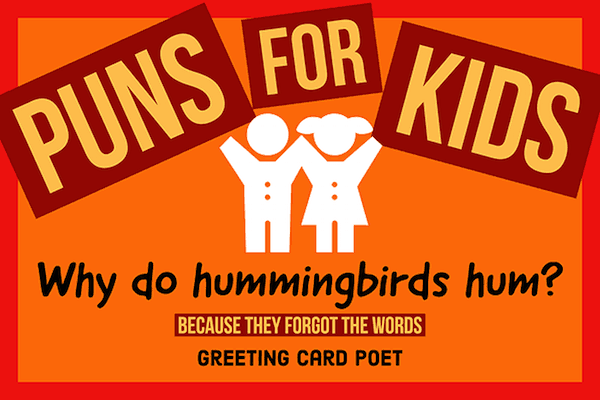 Not So Easy as Pie

Why couldn’t the cheese ever separate from the dough?
Because it said it loves them to pizzas.

What did the baker say when the pizza fell on the floor?
Another one bites the crust.

Where do pepperonis go on vacation?
The Leaning Tower of Pizza.

What do you call a sleeping pizza?
A piZZZZZZa.</li>

What do you call a postal carrier that can speak to packages?
A parcel tongue.

What kind of laugh does Newt Scamander make?
A bowchuckle.

Why don’t get my Harry Potter friend’s jokes?
Because there is something RON with you.

Why can’t Harry tell the difference between his potion’s pot and his best friend?
They’re both cauldrons.

Why doesn’t Voldemort have glasses?
Nobody nose.

A Punning Gag on Potter

What do you call an electrocuted Dark Lord?
A Volt-demort.

How does Harry Potter get rid of a rash?
With Quit-itch.

What do you call a robbing Muggle?
A Muggler.

What did the comedian say to Harry Potter?
Why so Sirius? 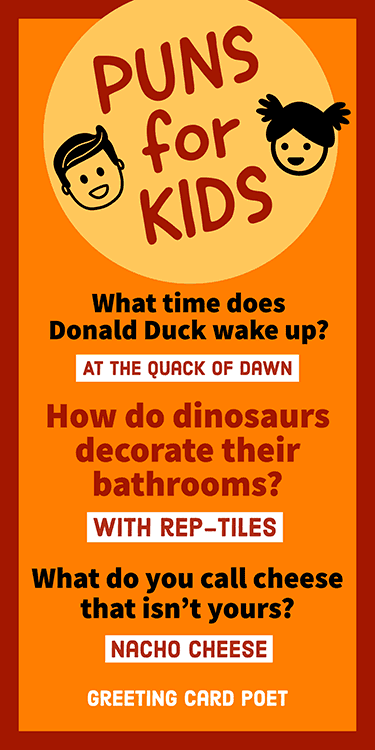 Why do hummingbirds hum?
Because they forgot the words.

Why is a piano so hard to open?
Because the keys are on the inside.

What’s the most musical bone?
The trombone.

What makes music on your hair?
A headband.

A Symphony of Wit

Why was the musician arrested?
Because she got in treble.

Where did the music teacher leave her keys?
On the piano.

Why are pirates great singers?
They can hit the high C’s.

How do you make a bandstand?
Take their chairs away.</li>

What type of music are balloons scared of?
Pop music.

Why was the leopard so bad at playing hide and seek?
Because he was always spotted

What do you get when you cross a snake with a pie?
A pie-thon.

When do you know when the moon has had enough to eat?
When it’s full.

What do you call a bear with no teeth?
A gummy bear!

What do you call cheese that isn’t yours?
Nacho cheese!

Where do cows go for entertainment?
To the moo-vies!

Why are elephants so wrinkled?
Because they take too long to iron!

What do you call a cow with two legs?
Lean meat!

What animal needs to wear a wig?
A bald eagle!

What’s the definition of illegal?
A sick bird.

What do you call a fly without wings?
A walk!</li> 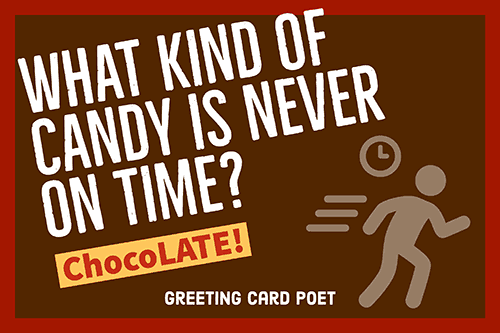 What kind of bear has no teeth?
A gummy bear.

What did the M&M go to college?
Because he wanted to be a Smarty.

What did the cute Starburst say to the Mars Bar?
Going my Milky Way?

What country did candy come from?
Sweeten!

What do you call a lamb covered in chocolate?
A Candy Baa.

What do you call an infant that cries a lot?
Baby Ruthless. 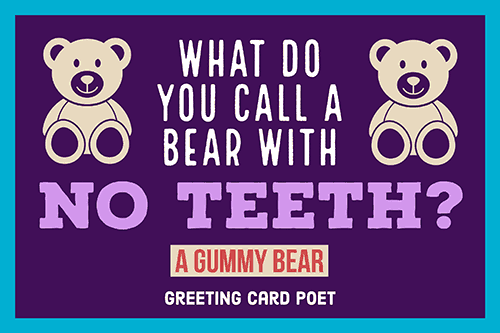 What kind of candy is never on time?
ChocoLATE.

What is an astronauts favorite chocolate?
A Mars bar.

What kind of candy bar does an employee crave before the weekend?
A Payday.

Why did Captain Hook’s Pirate Ship fly?
Because it never lands.

What time does Donald Duck wake up?
At the quack of dawn.

Why did Mickey Mouse go into space?
Because he wanted to find Pluto.

Why does Alice ask so many questions?
Because she’s in Wonderland.

Why did the lions go to Simba’s naming ceremony?
Because it was the mane event.

Why would Snow White make a good judge?
Because she’s the fairest one of all.

What did the 101 Dalmatians say after eating dinner?
That hit the spot.

How did dinosaurs decorate their bathrooms?
With rep-tiles.

What do you call a dinosaur with an extensive vocabulary?
A thesaurus.

What do you call a dinosaur at the rodeo?
A bronco-saurus.

What do you call someone who tells too many dinosaur jokes?
A dino-bore.

What kind of dinosaur never gives up?
A try-try-triceratops.

Any puns for kids’ ideas? Let us know via the contact page.

How did the T-rex feel after working out?
Dino-sore.

Which dinosaur should never stay out in the rain?
A stegosau-rust.

What do you call a scared dinosaur?
A nervous rex.

What do you call it when a dinosaur has a car accident?
A tyrannosaurus wreck.

Why did the turkey cross the road?
To prove he wasn’t a chicken.

Why did the cannibal return the comedian?
Because he tasted funny.

Why did the golfer always carry a second pair of pants?
In case he got a hole-in-one.

Just, what is a pun?

Oxford Living Dictionaries defines it as,

A joke exploiting the different possible meanings of a word or the fact that there are words which sound alike but have different meanings.

You’re on our Kids Puns page.

Brain Teasers for kids and adults