Nothing is better than funny dad jokes. We all know what constitutes a dad joke. It’s a short, funny joke, often a pun, that is constructed in question or answer format without a long set-up. Dad jokes are never offensive, but sometimes very obvious. They’re told enthusiastically by dads around the world.

A good dad joke can be met with groans or hearty laughter. The one common denominator in all dad jokes is that they are fun and meant to be that way. No harsh ribbing, no innuendos, and never disparaging. Remember, going 7 days without a dad joke can make you weak. (Sorry, couldn’t resist.) Without further ado, here are 52 of the best.

1.) Want to hear a joke about construction?
I’m still working on it.

2.) Did you hear about the Italian chef that died?
He pasta way.

3.) Why do you never see elephants hiding in trees?
Because they’re so good at it.

4.) I had to put my foot down.
I was acting like a flamingo.

5.) What do you call a man with a rubber toe?
Roberto.

6.) Did you hear about the new restaurant called Karma?
You get what you deserve.

9.) An old man at the bank asked me if I could check his balance, so I pushed him over.

10.) If you had tea with the Queen, what kind of tea would it be?
Royalty.

12.) I visited the satisfactory where average things are made.

13.) Why do melons have weddings?
They cantaloupe! 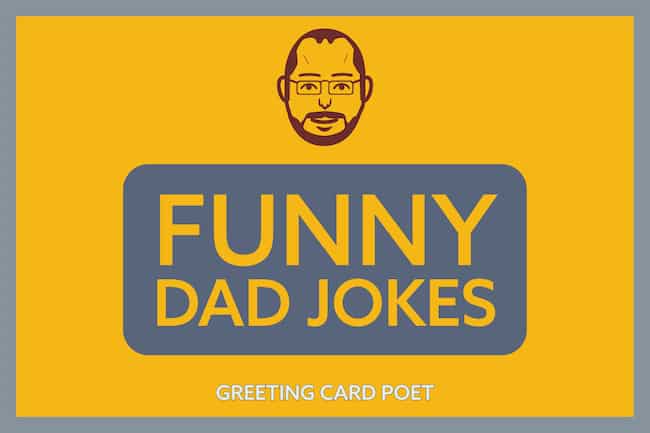 Sometimes you’re not looking for a big laugh, but you want to entertain the room a little bit, so we present these dad jokes. These jokes are designed to bring a smile to your face not necessarily a big laugh. We guarantee these dad jokes will make you smile at the very least.

14.) There’s a city in the desert where all the dentists go for conventions, it’s called Floss Vegas.

16.) A window washer decided he wasn’t going to clean the windows on a tall office building because he was worried he was going to kick the bucket.

17.) I was going to tell you a joke about a balloon, but it got away from me.

18.) How did Darth Vader know what Luke got him for Christmas? He felt his presents!

19.) A man asked his friend for a piece of cheese and his friend said, “no man, it’s nacho cheese.”

20.) When does a joke become a dad joke? When it becomes apparent!

22.) What crime was the egg most afraid of? Poaching.

23.) It’s pointless to write with a broken pencil.

24.) I’m telling you, anything with Velcro is a total rip-off.

26.) E-flat walks into a bar and the bartender says, “sorry, we don’t serve minors.”

Check out: Hilarious Quotes to Tickle Your Funny Bone. 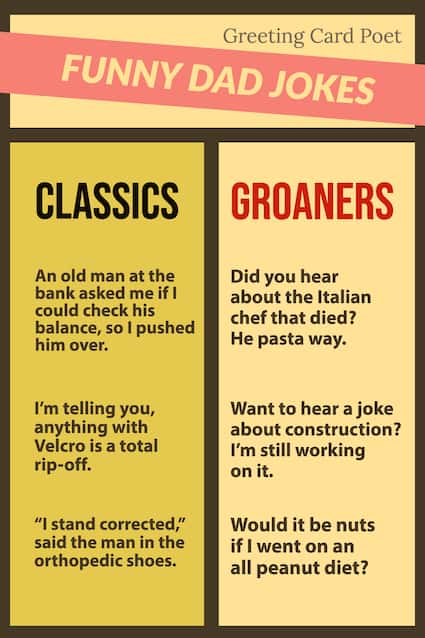 So, you think you’ve already heard every dad joke there is. Wrong, here are some dad jokes that are intended to get big laughs. Not just a little giggle or a guffaw but outright laugh out loud funny. Give these dad jokes a try and see if you don’t get a pretty big laugh.

28.) What did the drummer call his twin daughters? Anna one, Anna two.

30.) Whatever you do, don’t have the sushi in this place, it’s a little fishy.

34.) It’s true, I have a receding hare line. I’ve got a bunch of rabbits that hop backward.

35.) An astronaut went to a restaurant on the moon. He enjoyed the food, but the 36.) restaurant had no atmosphere.

36.) Two people stole a calendar and they each got six months in jail.

37.) A cup of coffee walked into a police station and said, “I’d like to report a crime.” The desk officer asked, “what kind of crime?” The coffee said, “I got mugged.”

38.) “I stand corrected,” said the man in the orthopedic shoes. 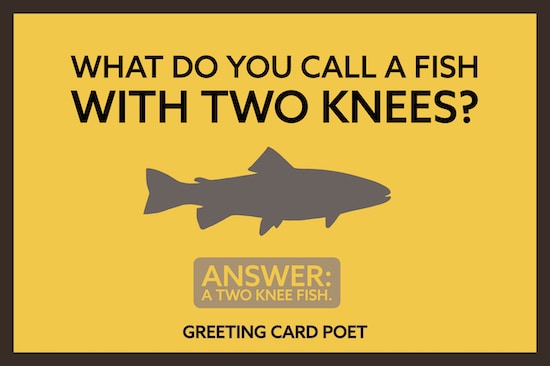 Check out: What Do You Call Jokes.

44.) People must be dying to get into this graveyard.

45.) I just finished a book on ant-gravity, I couldn’t put it down.

48.) Why did the picture go to jail? Because it was framed.

49.) A belt got sent to jail for holding up a pair of pants.

51.) It’s true, the shovel was a ground-breaking invention.

52.) Atheism is a non-prophet organization.

A funny dad joke is one that, at the very least, elicits a smile and when delivered properly and with gusto, might just bring a belly laugh. The joke can be “bad,” but it’s still good and might get a laugh. A funny dad joke is all in the delivery. Too over-the-top and it could fall flat. Done with a touch of irony and it could hit home. Experiment a little and let your delivery fit your personality.

Your kids may roll their eyes, but they’ll still be grinning by the end. To make sure they are funny, test them out on your wife, kids, neighbor, or even your dog and see how they react. We bet you’ll get a laugh or a giggle, but never a moan.

You always want to have a dynamite dad joke up your sleeve. So, pick out your favorites from this list and slip them in your memory bank. You’re sure to entertain and/or embarrassing at every occasion. And in the end, we swear we won’t let anyone know where you got all your funny dad jokes.

Tim loves to embarrass his kids by telling funny Dad jokes when he’s not writing jokes or working as a toy inventor and creative director.

Dad Humor: The Bad and the Horrible

The Best of Dad Humor

125+ Who is most likely to questions