Halloween jokes appeal to monsters of all ages and with these, you can make all of your friends groan with these gems. All Hallows Eve is supposed to be fun and we’re here to make sure you have something to make all the little trick-or-treaters laugh, so check out this collection of funny jokes that you should have nothing to worry about sharing. Topics from our large list include ghosts, witches, vampires, skeletons, and more!

The jokes that we’ve compiled are sure to boo-st your enjoyment during the spookiest time of year. Beware… you’re entering the Halloween Jokes zone.

What would you get if you crossed a vampire and a teacher?
Lots of blood tests.

What happens when the ghost is lost in the fog?
He is mist.

What did the orange pumpkin say to the green pumpkin?
Why orange you orange?

What is a vampire’s favorite fruit?
A nectarine.

Why can’t skeletons play church music?
Because they don’t have any organs. Check out our Halloween Puns.

Why do skeletons drink lots of milk?
Because it’s good for the bones.

Why did Dracula’s mother give him cough medicine?
Because he was having a coffin fit. 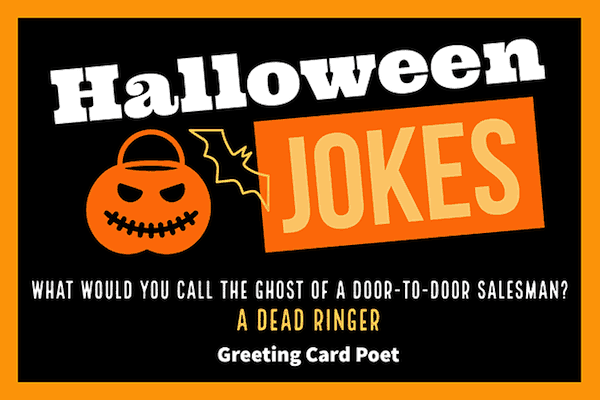 What did Dr. Frankenstein get when he put a goldfish brain in the body of his dog?
I don’t know, but it is great at chasing submarines.

Why wasn’t there any food left after the monster party?’
Cause everyone was a goblin.

Why did the vampire’s lunch give him heartburn?
It was a stake sandwich.

What would you call the ghost of a door-to-door salesman?
A dead ringer.

What do skeletons always order at a restaurant?
Spare ribs.

Who was the most famous French skeleton?
Napoleon bone-apart.

Who won the skeleton beauty contest?
No body.

Learn about history, customs and greetings of Halloween.

I threw a boomerang at a ghost the other day.
I knew it would come back to haunt me.

What do short-sighted ghosts wear?
Spook-tacles.

What do you call a ghost with a broken leg?
A hobblin’ gobblin.

Where do ghosts mail their letters?
At the Ghost Office

What’s a ghost’s favorite type of bird?
A scare crow.

What did the ghost teacher say to her students?
Watch the chalk board and I’ll go through it again.

Where do ghosts live?
In a dead end street.

What did the mommy ghost say to the baby ghost?
Don’t spook until you’re spoken to.

Where do baby ghosts go during the day?
Day scare centers.

What kind of ghosts do you find at the top of sky scrapers?
High spirits.

Why are ghosts bad at telling lies?
Because you can see right through them.

How does a ghost say goodbye to a vampire?
So long, sucker.

Why are the ghosts in graveyards so noisy?
Because of the coffin.

Why did the game warden arrest the ghost?
Because he didn’t have a haunting license.

What do you call the ghost of a door-to-door salesman?
A dead ringer.

What do you call a ghost in a torn sheet?
A holy terror.

What kind of horses do ghosts ride?
Night-mares.

Why did the ghost go to the disco?
Because he liked to boo-gie.

What’s a ghost’s favorite day of the week?
Fright-day.

Who writes all the books about haunted houses?
Ghostwriters.

What do you get if you cross a vampire with a laptop?
Love at first byte.

Why don’t you want to hang out with Victor the Vampire?
Well, first of all, he’s a pain in the neck.

Why did the vampire break up with her boyfriend?
Because he wasn’t her type.

Fangs a Lot for these Funnies

Did you hear about the vampire who tortured his victims with music?
His Bach was worse than his bite.

How do vampires travel across the sea?
On blood vessels.

Why are vampire families always so close knit?
Because blood is thicker than water.

Why do vampires need cold medicine?
For their coffin.

Why did the witches’ team lose the baseball game?
Their bats flew away.

How does a witch know what time it is?
She looks at her witch watch.

How did the witch get around when her broomstick broke?
She witch-hiked.

How do witches get good bargains?
They hag-gle.

What do you call a nervous witch?
A twitch.

Why do witches fly on broomsticks?
Because vacuum cleaner cords aren’t long enough.

Why don’t angry witches ride their brooms?
They’re afraid of flying off the handle.

What happened to the witch who was naughty at school?
She was ex-spelled.

What’s the problem with twin witches?
You never know which witch is which.

What does a witch ask for when she stays in a hotel?
Broom service.

What might you fight on a haunted beach?
A sand-witch!

Why was the witch’s paper marked down?
She didn’t spell check it.

Why did the witch put her broom in the washing machine?
Because she wanted a clean sweep.

What do you get if you cross a witch with ice?
A cold spell.

What do you call a nervous witch?
A twitch.

What kind of jewelry do witches wear?
Charm bracelets.

Why is drinking witches brew good for you?
It’s very newt-ricious. 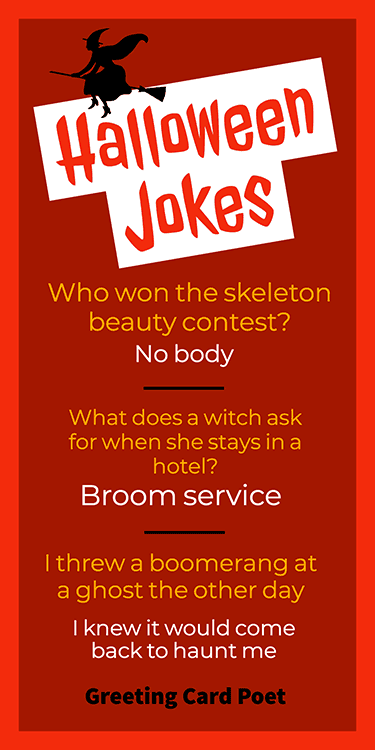 What do you get if you divide the circumference of a pumpkin by its diameter?
Pumpkin pi.

What is the best advice a pumpkin pastry baker can give?
Beauty is in the pie of the beholder.

What do you call a famous girl band?
The Pumpkin Spice Girls.

What do you call a Jack-o-lanterns family members?
Pump-kins.

Who is the leader of all Jack-o-lanterns?
The Pumpking.

How do you know a veggie is tough?
Because it has thick pump-skin.

What are Jack-o-lanterns afraid of?
Things that go Pumpkin the night.

How do Jack-o-lanterns get to so strong?
By pumpkin iron.

What kind of alley does a ghost prefer to haunt?
A dead end.

What is a skeleton’s favorite musical instrument?
A trom-bone.

How do you mend a jack-o-latern?
With a pumpkin patch.

Why do they put fences around graveyards?
Because people are dying to get in.

Why wasn’t the vampire working?
He was on his coffin break.

What’s a ghosts favourite ride at the carnival?
The roller ghoster.

Why didn’t the skeleton dance at the school’s Halloween party?
He had no body to dance with.

What is it like to be kissed by a vampire?
It’s a pain in the neck.

What type of music do mummies like?
Wrap music.

What type of art is a skeleton’s favorite?
Skulltures.

What room does a ghost not need?
A living room.

What is a vampires favorite type of ship?
A blood vessel.

What do you call a ghost in the middle of the sea?
A Boo-y.

Why couldn’t the ghost see her mom and dad?
They were transparent.

What musical instrument does a skeleton play?
A trombone.

Why did the mummy call the doctor?
Because her baby was coffin.

What do you get when you drop a pumpkin?
Squash.

Who won the skeleton race?
No body.

Thanks for stopping in for a spell

Eat, drink, and be scary this Halloween which falls on Thursday, October 31, 2019.

Thanks for creeping it real. Let’s get this party startled! Fangs for reading till the end.

Mike can still remember the days of using two pillow cases to ensure the bounty didn’t break through while trick-or-treating. He’s also the founder and editor of Greeting Card Poet.