We started with our 55 favorite peace quotes, but we extended it quite a bit. Enjoy. 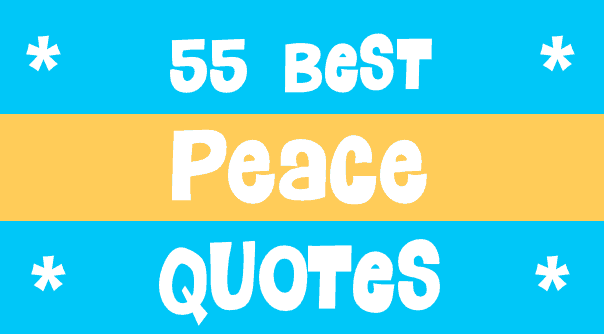 Peace cannot be achieved through violence, it can only be attained through understanding.
Ralph Waldo Emerson

Everything will be okay in the end. If it’s not okay, it’s not the end.
Unknown

Do not let the behavior of others destroy your inner peace.
Dalai Lama

If you want peace, you won’t get it with violence.
John Lennon

I was once asked why I don’t participate in anti-war demonstrations. I said that I will never do that, but as soon as you have a pro-peace rally, I’ll be there.
Mother Teresa

The very first step in nonviolence is that we cultivate in our daily life, as between ourselves, truthfulness, humility, tolerance, loving kindness.
Gandhi – 60 more Gandhi Quotes

Our lives begin to end the day we become silent about things that matter.
Martin Luther King Jr.

When the power of love overcomes the love of power the world will know peace.
Jimi Hendrix

Peace does not rest in the charters and covenants alone. It lies in the hearts and minds of all people. So let us not rest all our hopes on parchment and on paper, let us strive to build peace, a desire for peace, a willingness to work for peace in the hearts and minds of all of our people. I believe that we can. I believe the problems of human destiny are not beyond the reach of human beings.
John F. Kennedy

Until he extends his circle of compassion to include all living things, man will not himself find peace.
Albert Schweitzer

If there is a mystical chord in democracy, it probably revolves around the notion that unexpected music can resonate from politics when people are pursuing questions larger than self… I have seen that ennobling effect in people many, many times— expressed by those who found themselves engaged in genuine acts of democratic expression, who claimed their right to define the larger destiny of their community, their nations.
William Greider

Our souls may lose their peace and even disturb other people’s, if we are always criticizing trivial actions – which often are not real defects at all, but we construe them wrongly through our ignorance of their motives.
St. Teresa of Avila

The moment we begin to fear the opinions of others and hesitate to tell the truth that is in us, and from motives of policy are silent when we should speak, the divine floods of light and life no longer flow into our souls.
Elizabeth Cady Stanton

Our peace shall stand as firm as rocky mountains.
William Shakespeare

What you leave behind is not what is engraved in stone monuments, but what is woven into the lives of others.
Pericles

Courage is the price that life exacts for granting peace.
Amelia Earhart

This is the true joy in life, the being used for a purpose recognized by yourself as a mighty one; the being a force of nature instead of a feverish, selfish little clod of ailments and grievances complaining that the world will not devote itself to making you happy. I am of the opinion that my life belongs to the whole community, and as long as I live it is my privilege to do for it whatever I can. I want to be thoroughly used up when I die, for the harder I work the more I live – I rejoice in life for its own sake. Life is no brief candle for me. It is a sort of splendid torch which I have got hold of for the moment, and I want to make it burn as brightly as possible before handing it on to future generations.

I see the world being slowly transformed into a wilderness – I hear the approaching thunder that, one day, will destroy us too. I feel the suffering of millions. And yet, when I look up at the sky, I somehow feel that everything will change for the better, that this cruelty too shall end, that peace and tranquility will return once more.
Anne Frank

I speak of peace, therefore, as the necessary rational end of rational men. I realize the pursuit of peace is not as dramatic as the pursuit of war… But we have no more urgent task.
John F. Kennedy

Hobbits are an unobtrusive but very ancient people, more numerous formerly than they are today; for they love peace and quiet and good tilled earth: a well-ordered and well-farmed countryside was their favourite haunt.
J.R.R. Tolkien

War is an instrument entirely inefficient toward redressing wrong; and multiplies, instead of indemnifying losses.
Thomas Jefferson

If the human race wishes to have a prolonged and indefinite period of material prosperity, they have only got to behave in a peaceful and helpful way toward one another.
Winston Churchill

We must restore hope to young people, help the old, be open to the future, spread love. Be poor among the poor. We need to include the excluded and preach peace.
Pope Francis

There is a higher court than courts of justice, and that is the court of conscience. It supersedes all other courts.
Mahatma Gandhi

Never doubt that a small group of thoughtful, committed citizens can change the world. Indeed, it is the only thing that ever has.
Margaret Mead

You cannot shake hands with a clenched fist.
Indira Gandhi

Peace does not mean an absence of conflicts; differences will always be there. Peace means solving these differences through peaceful means; through dialogue, education, knowledge; and through humane ways.
Dalai Lama XIV

We seek peace, knowing that peace is the climate of freedom.
Dwight D. Eisenhower

Nonviolence is the answer to the crucial political and moral questions of our time; the need for mankind to overcome oppression and violence without resorting to oppression and violence. Mankind must evolve for all human conflict a method which rejects revenge, aggression, and retaliation. The foundation of such a method is love.
Martin Luther King

It is madness for sheep to talk peace with a wolf.
Thomas Fuller

Love is the vital essence that pervades and permeates, from the center to the circumference, the graduating circles of all thought and action. Love is the talisman of human weal and woe –the open sesame to every soul.
Elizabeth Cady Stanton

More than just an end to war, we want an end to the beginnings of all wars.
Franklin D. Roosevelt

The future belongs to those who believe in the beauty of their dreams.
Eleanor Roosevelt

Fourth of July Images and Sayings