You are here: Home / Gandhi Quotes, Sayings, Words of Wisdom

A read through our Mahatma Gandhi quotes will help you recognize the wisdom and brilliance of this leader.

Mahatma Gandhi was an influential figure known for his peaceful activism throughout the world. Gandhi was born in 1869 in Porbandar, India, and in 1948, he was assassinated. He led India’s independence against British rule while advocating for Indian civil rights through non-violent actions. He is known as the Father of his country because of the remarkable social and political progress he achieved.

Gandhi’s remarkable wisdom is on full display in the quotations below. Reflect on his thoughts on love, inspiration, wisdom, and life as you read through his words.

Be the change that you want to see in the world.

The best way to find yourself is to lose yourself in the service of others.

In a gentle way, you can shake the world.

It’s easy to stand with the crowd. It takes courage to stand alone.

It’s not too late at all. You just don’t yet know what you are capable of.

Men often become what they believe themselves to be. If I believe I cannot do something, it makes me incapable of doing it. But when I believe I can, then I acquire the ability to do it even if I didn’t have it in the beginning. 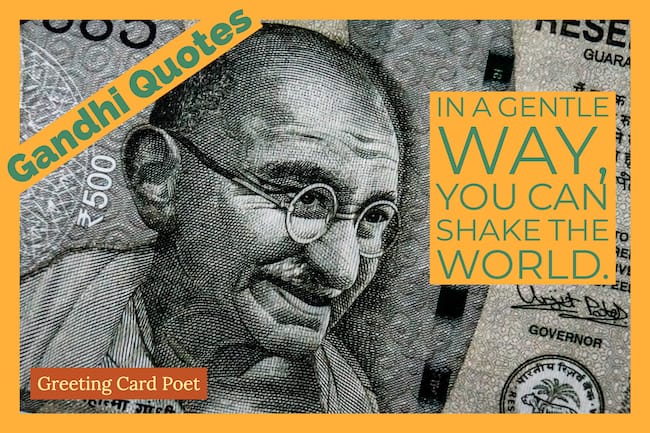 The future depends on what you do today.

A ‘No’ uttered from the deepest conviction is better than a ‘Yes’ merely uttered to please, or worse, to avoid trouble.

There are two days in the year that we can not do anything, yesterday and tomorrow.

You can chain me, you can torture me, you can even destroy this body, but you will never imprison my mind.

Nobody can hurt me without my permission.

Non-violence requires a double faith, faith in God and also faith in man.

Be congruent, be authentic, be your true self.

Poverty is the worst form of violence.

Honest disagreement is often a good sign of progress.

Glory lies in the attempt to reach one’s goal and not in reaching it.

You may never know what results come of your action, but if you do nothing there will be no result.

I do not want to foresee the future. I am concerned with taking care of the present. God has given me no control over the moment following.

More Words of Wisdom from a Variety of Authors.

An eye for an eye only ends up making the whole world blind. (One of our favorite Gandhi quotes.)

A coward is incapable of exhibiting love; it is the prerogative of the brave.

Do not judge others. Be your own judge and you will be truly happy. If you will try to judge others, you are likely to burn your fingers.

My wisdom flows from the Highest Source. I salute that Source in you. Let us work together for unity and love.

We win justice quickest by rendering justice to the other party.

Whenever you are confronted with an opponent, conquer him with love.

Relationships are based on four principles: respect, understanding, acceptance, and appreciation.

When I despair, I remember that all through history the way of truth and love has always won. There have been tyrants and murderers and for a time they seem invincible, but in the end, they always fall… think of it, always.

There are no goodbyes for us. Wherever you are, you will always be in my heart. 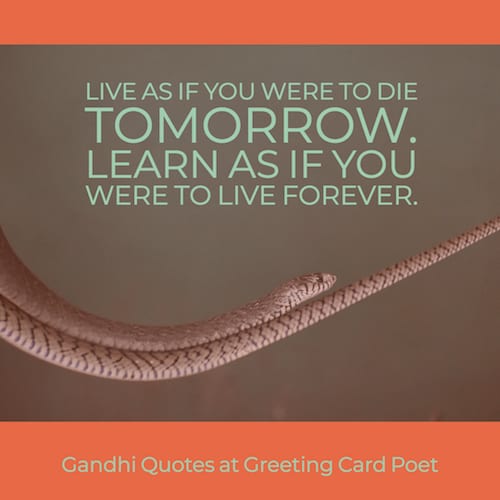 Happiness is when what you think, what you say, and what you do are in harmony.

You must not lose faith in humanity. Humanity is like an ocean; if a few drops of the ocean are dirty, the ocean does not become dirty.

Our ability to reach unity in diversity will be the beauty and the test of our civilization.

There is more to life than simply increasing its speed.

Always aim at complete harmony of thought and word and deed. Always aim at purifying your thoughts and everything will be well.

Whatever you do will be insignificant. But it is very important that you do it.

The difference between what we do and what we are capable of doing would suffice to solve most of the world’s problems.

For one man cannot do right in one department of life whilst he is occupied in doing wrong in any other department. Life is one indivisible whole.

The greatness of a nation and its moral progress can be judged by the way in which its animals are treated.

Tip: These Gandhi quotes are great for including in sign-offs on your emails.

A man is but the product of his thoughts what he thinks, he becomes.

The future depends on what we do in the present.

Our greatest ability as humans is not to change the world, but to change ourselves.

Knowledge gained through experience is far superior and many times more useful than bookish knowledge.

No culture can live if it attempts to be exclusive.

Even if you are a minority of one, the truth is the truth.

Strength does not come from physical capacity. It comes from an indomitable will.

A man is but the product of his thoughts; what he thinks, he becomes.

You must not lose faith in humanity. Humanity is an ocean; if a few drops of the ocean are dirty, the ocean does not become dirty.

The enemy is fear. We think it is hate; but, it is fear.

Freedom is not worth having if it does not include the freedom to make mistakes. 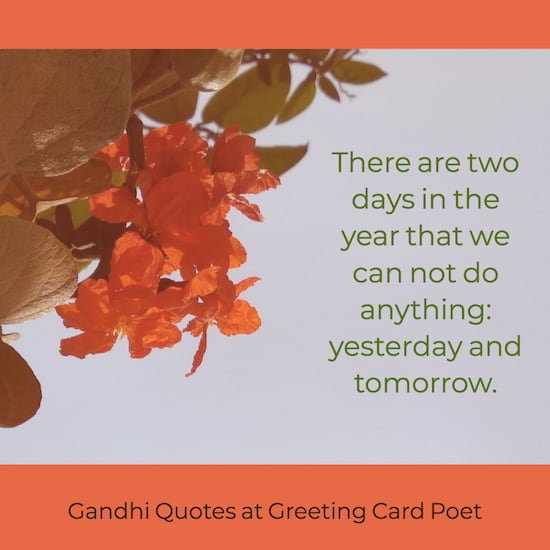 Education is the basic tool for the development of consciousness and the reconstitution of society.

An ounce of practice is worth more than tons of preaching.

I have no secret methods. I know no diplomacy save that of truth. And, I have no weapon but non-violence.

It is unwise to be too sure of one’s own wisdom. It is healthy to be reminded that the strongest might weaken and the wisest might err.

The good man is the friend of all living things.

Strength does not come from physical capacity. It comes from an indomitable will.

Satisfaction lies in the effort, not in the attainment. Full effort is full victory.

I will not let anyone walk through my mind with their dirty feet.

I look only at the good qualities of men. Not being faultless myself, I won’t presume to probe into the faults of others.

— Mike O’Halloran
Mike is the founder and editor of Greeting Card Poet.