You are here: Home / Vegan Quotes and Vegetarian Sayings

If you look at the history of vegan quotes and vegetarian sayings, they go back decades. There have been dozens of famous personalities from all fields who have emphasized the importance of veganism and vegetarianism, embraced it and encouraged others to follow.

Here are some compelling Vegan and Vegetarian Quotes to encourage and inspire you to make the world a better place. You can also share these quotes and sayings with friends and loved ones to encourage them too.

Veganism is not a sacrifice. It is a joy.
Gary L. Francione

My perspective of veganism was most affected by learning that the veal calf is a by-product of dairying and that in essence there is a slice of veal in every glass of what I had thought was an innocuous white liquid – milk.
Rynn Berry

Veganism is not about giving anything up or losing anything; it is about gaining peace within yourself that comes from embracing nonviolence and refusing to participate in the exploitation of the vulnerable.
Gary L. Francione

Animals are my friends… and I don’t eat my friends.
George Bernard Shaw

Being vegetarian here also means that we do not consume dairy and egg products, because they are products of the meat industry. If we stop consuming, they will stop producing. Only collective awakening can create enough determination for action.
Thich Nhat Hanh

If we each had to butcher our own meat, there would be a great increase in the number of vegetarians.
Ernest Howard Crosby

People eat meat and think they will become strong as an ox, forgetting that the ox eats grass.
Pino Caruso 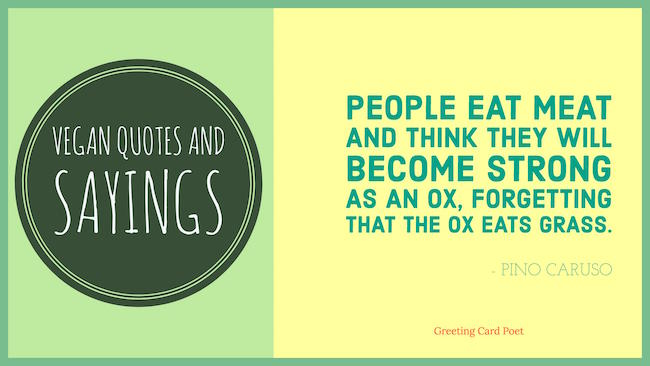 Being vegan helped me realize I can say and do what I believe is right. That’s powerful.
Alicia Silverstone

Being vegan is not always easy and accessible. But it’s a way of life and makes me as a person feel really good and physically look better.
Olivia Wilde

I made the choice to be vegan because I will not eat (or wear, or use) anything that could have an emotional response to its death or captivity.
Rai Aren

With lentils, tomatoes and rice, olives and nuts and bread, Why does a man care to gnaw a slice of something bleeding and dead?
Henry Bailey Stevens

I decided to pick the diet that I thought would maximize my chances of long-term survival.
Al Gore

Being a vegan just helps me build up my self-esteem. I feel good about it every time I eat a meal.
Steve-O

The best part of being a vegan is the purity and peace of mind one experiences and the strong connection I feel to the animal kingdom.
Uri Gellar 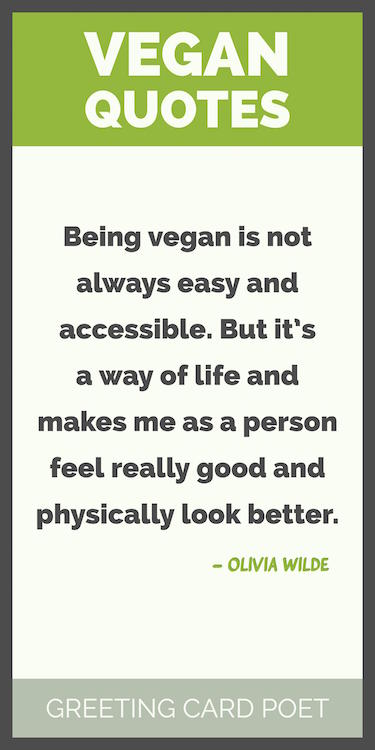 You have just dined, and however scrupulously the slaughterhouse is concealed in the graceful distance of miles, there is complicity.
Ralph Waldo Emerson

When people ask me why I don’t eat meat or any other animal products, I say, because they are unhealthy and they are the product of a violent and inhumane industry.
Cassey Afleck

We do not need to eat animals, wear animals, or use animals for entertainment purposes, and our only defense of these uses is our pleasure, amusement, and convenience.
Gary L. Francione

Give up animal foods for two months, or even for a week, and I promise you will look and feel better, and you’ll want to do it forever.
Alicia Silverstone

When you adopt a vegan diet we make a connection, you don’t go back, it is not a diet, it is a lifestyle.
Freelee Frugivore

I’m a vegan. It makes me feel really good and bright.
Lea Michele

The human body has no more need for cows’ milk than it does for dogs’ milk, horses’ milk, or giraffes’ milk.
Michael Klaper 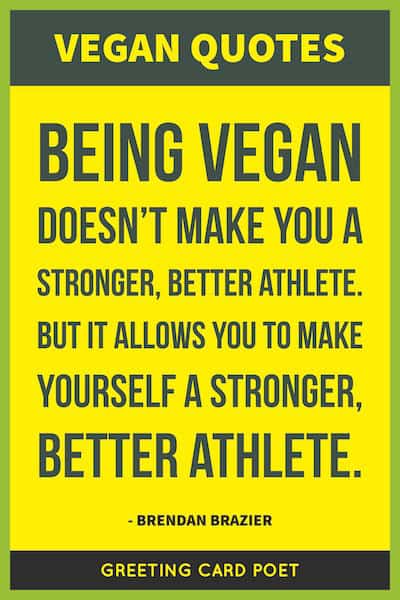 A person who does not eat or use animal products of any kind.

If slaughterhouses had glass walls, the whole world would be vegetarian.
Linda McCartney

I did not become a vegetarian for my health, I did it for the health of the chickens.
Isaac Bashevis Singer

Vegetarianism preserves life, health, peace, the ecology, creates a more equitable distribution of resources, helps to feed the hungry, encourages nonviolence for the animal and human members of the planet, and is a powerful aid for the spiritual transformation of the body, emotions, mind, and spirit.
Gabriel Cousens

Anyone who cares about the Earth – really cares – must stop eating animals.
Linda McCartney 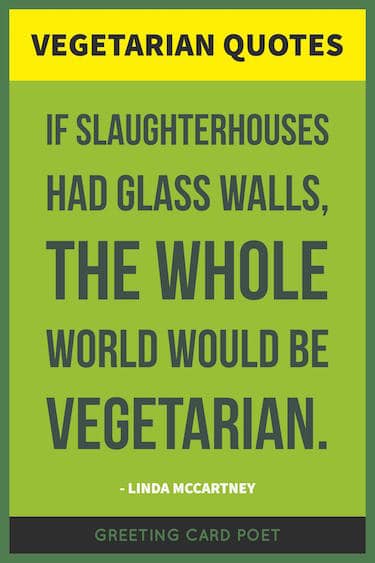 I became a vegetarian after realizing that animals feel afraid, cold, hungry and unhappy like we do.
Cesar Chavez

No animals need to die in order for me to live. And that makes me feel good.
Howard Lyman

If you could see or feel the suffering you wouldn’t think twice. Give back life. Don’t eat meat.
Kim Basinger

A vegetarian in Texas. You’re a long way from home.
Lee Child

It is more important to prevent animal suffering, rather than sit to contemplate the evils of the universe praying in the company of priests.
Buddha

I hold that the more helpless a creature, the more entitled it is to protection by man from the cruelty of man.
Mohandas Gandhi 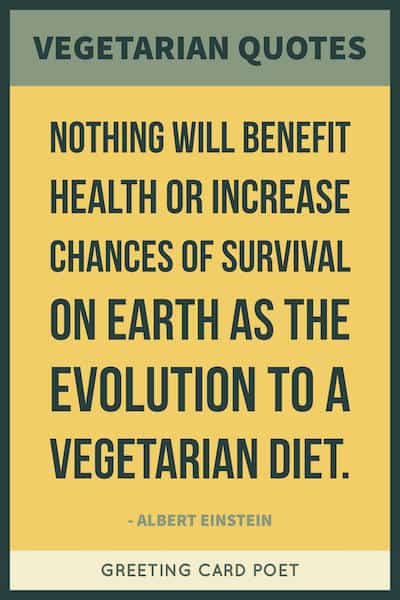 Albert Einstein, one of the most famous scientists in history, turned vegetarian after having supported the concept for decades. There are a few famous vegetarian quotes from the German-born physicist.

I have always eaten animal flesh with a somewhat guilty conscience.

Nothing will benefit health or increase chances of survival on earth as the evolution to a vegetarian diet.

It is my view that the vegetarian manner of living, by its purely physical effect on the human temperament, would most beneficially influence the lot of mankind.

Liz is a poet, vegetarian, and writer based in Minneapolis.

If you have suggestions for vegan quotes and vegetarian sayings, please let us know via the Contact page. Thanks.