Sometimes simply reading a few well-chosen words — quotes about life from the famous and the not-so-famous — can be enough to set you on the path to a more rewarding life.

At some level, you may already know what these quotes express. But as the French philosopher, Michel de Montaigne said, “I quote others in order the better to express my own self.” Because these individuals expressed themselves so eloquently, they motivate us to put their thoughts into action and enrich our lives.

A Happier You — Quotes About Life

Those quoted here include statesmen, philosophers, and celebrities who have met life’s challenges successfully. They learned a lot along the way and know whereof they speak. So here is a collection of some of their very best crystallized thinking. You’ll find proverbs that lead you to the proverbial “good life,” maxims to help you maximize your potential. Stay mindful of these 17 pearls of wisdom in your daily life and the uptick in your personal happiness is bound to be notable — and quotable.

Yep, the world is crazy sometimes. Learn to live with it. Tomorrow it may rain, and you can’t stop it. But you can carry an umbrella and stay dry. Similarly, other people may rain on your parade. But when their actions seem unkind, unfair, or unfathomable, just remember those other people are trying to act in their own best interests, not yours. If you can’t control them, don’t wallow in your frustration. Focus on what you can control: yourself. Forego the moaning and groaning during the day and you’ll do less tossing and turning at night. Try to operate under your own umbrella of positivity. Odds are you’ll come out ahead in the long run.

2.) “Cherish all your happy moments; they make a fine cushion for old age.”

Taking this little gem to heart represents a win-win: It increases your happiness quotient in the present and in the future. When something good happens, savor it. Let’s say you get a promotion. That doesn’t happen every day. So go out and celebrate it. Do something wild. And guess what? Fifty years from now, when you’re old and gray, chances are you’re going to remember that promotion largely because of the memorable celebration that followed it. The good times may not represent the lion’s share of your life in terms of days or weeks or years, but someday those good times just might make up the lion’s share of your memories.

When you’re happy, healthy, and have someone to share your life with, you look up at the moon and the stars and it all looks wonderful to you. Then, one day life deals you some harsh blows, and what happens? Those same stars suddenly appear to you as jumbled specks in a vast, cold, empty universe. Obviously, the universe hasn’t changed — you have. What’s important to remember is, once you get yourself back on track, the order will return to the universe as well. Just because your life is temporarily out of whack, don’t get fooled into thinking life itself is hopeless.

Think of your life as a series of building blocks. You are building a monument to the kind of person you are. If you build it right, others are going to look at it in awe. 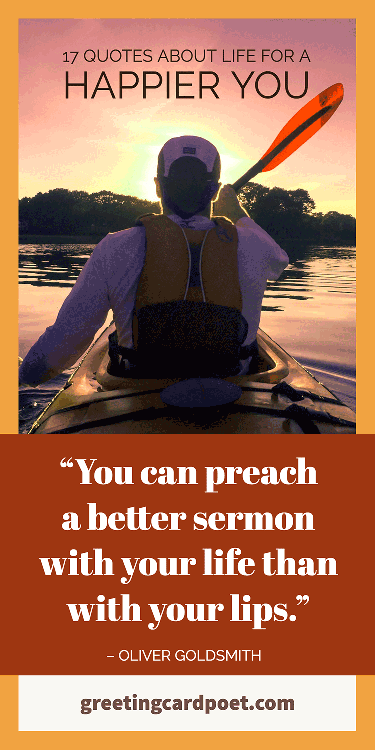 Let’s suppose you want to be a lawyer. Then you flunk out of law school. You’re devastated. To forget your troubles, you go to a club where your friend’s up-and-coming band is playing. Your friend says his band is looking for a manager. You take the job, discover you love the music business, and realize you’d have been miserable as a lawyer. Bad breaks turn out to be lucky breaks more often than you think.

6.) “Be who you are and say what you feel. Because those who mind don’t matter and those who matter don’t mind.”

This advice is oftentimes easier said than done. Subjects like politics, religion, and sexual orientation can be minefields. If you constantly speak your mind, you may wind up with fewer friends — but you’ll have fewer ulcers. And even those ex-friends of yours are probably going to admire you for laying all your cards on the table. They’ll probably envy your courage, your passion, and your honesty. Plus you’ll have the satisfaction of knowing that the friends who remain appreciate the real you.

7.) “Always imitate the behavior of the winners when you lose.”

If you lose a hard-fought battle but manage to show grace and dignity in defeat, you’ve actually won — because the ability to show that kind of sportsmanship after a crushing loss may demand just as much talent and determination as victory itself. I once coached a group of college students in a competition where they emerged victorious against another university. When the star of our team walked up and extended her hand for a handshake with the captain of the losing team, the captain refused the handshake and stalked off in a huff. At that moment, she wasn’t simply the captain of the losing team — she was a loser, period.

8.) “Remember, no one can make you feel inferior without your consent.”

Sometimes we all feel intimidated when we cross paths with someone who speaks better, acts cooler, and dresses nicer than we do. When that happens, resist the temptation to become tongue-tied and cower in a corner. The other person is human, just like you. Consider this: They might be so insecure that they feel compelled to wear designer clothes and bombard you with facts about the one subject they know inside and out. Make a point to act like the other person’s equal. You’ll soon find yourself on an equal footing with them — even if their feet happen to be walking in Gucci boots.

9.) “Overcome the notion that you must be regular. It robs you of the chance to be extraordinary.”

Remember that old Apple commercial, “Here’s to the crazy ones”? It celebrated geniuses like Einstein and Martin Luther King, Jr., declaring that, “the people who are crazy enough to change the world are the ones who do.” OK, maybe you won’t come up with a Theory of Relativity or an “I Have a Dream” speech. Maybe you won’t change the world. But if you’re not afraid to show those around you what makes you special, you might change someone’s life for the better. 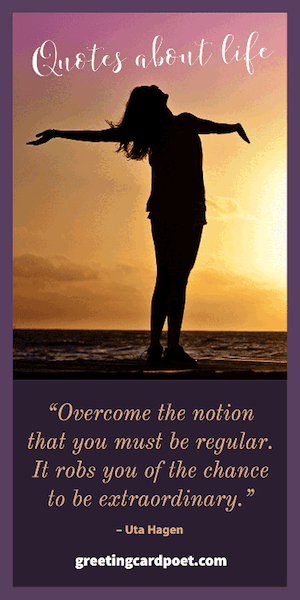 10.) “Holding onto anger is like drinking poison and expecting the other person to die.”

Does that sound like an exaggeration? Not so much. If you try to hide your anger, your antagonist will think they’ve won (they got their way and you’re not even mad). If you give them the silent treatment, they may revel in the fact that you’re still upset. Either way, you’re going to be miserable and they’re going to be gloating. So what do you do? Without exploding — but as forcefully as possible — let your anger out. Explain why you feel as you do. At some level, they’re likely to feel some remorse. In any event, once you’ve spit out “the poison,” you’ll be able to move on.

Tip: These quotes about life make great inspirational messages to place by your desk, on the fridge or on a bulletin board.

Children dream about becoming a cowboy or a ballerina. They haven’t thought about how they’re going to get there, but that’s okay — they’re children. For adults, dreams are not sufficient. You have to turn the dreams into reality, one step at a time. The reality is never as easy or as perfect as the dream. To achieve it, you need a plan of action. Where do you want to end up? What are you willing to give up in order to get there? How much time and money will it take? And how much do you want it? — that may be the most important question of all because the answer will likely determine whether or not you get there.

13.) “Success consists in going from failure to failure without loss of enthusiasm.”

Churchill was amazingly resilient, taking a number of long detours along the road to success. Overseeing a disastrous military campaign in World War I, he resigned from the British government and was out of office in the 1930s, when he became a leading critic of the government’s appeasement of Nazi Germany. Appointed Prime Minister in 1940, Churchill led the nation to victory in 1945. Despite his accomplishments, he was replaced as Prime Minister in 1945. Undeterred, he returned to power, enjoying considerable success in the 1950s. So if you suffer setbacks — on the office battlefield or on the homefront — channel Churchill.

In the course of a legendary career, Wayne Gretzky scored 1072 goals, more than any other hockey player before or since. No doubt he missed more than he made, but if he had stopped to worry each time about whether the puck was going into the net, he never would have broken all those records. Don’t be afraid to make gutsy decisions and take reasonable risks. Otherwise, you’ll never know if you’d have succeeded. And if you don’t even make the attempt, you’ve already failed.

15.) “Life is not measured by the number of breaths we take, but by the moments that take our breath away.”

Life can start to feel like a life sentence when each day goes along on a monotonous even keel, exactly like the day before it. It’s the highs and lows that make life interesting. Sooner or later the lows find all of us — that’s why we have to make the effort to find the highs. Seek out people who challenge or inspire you. Ride a mule to the bottom of the Grand Canyon. Find the thing that scares you, thrills you, energizes you — and shock yourself by making it your thing.

If you live entirely for others, you’ll use yourself up and cease to be of any use to anyone. Even Mother Teresa undoubtedly had days when she just had to get away from it all and chill.

Note: Any suggestions for the best quotes about life. Let us know via the contact page.

17.) “All things in the world are impermanent. They have the nature to rise and pass away. To be in harmony with this truth brings true happiness.”

Assuming you survive beyond youth, you’re almost certain to experience serious loss in your life. Family, friends, home, work — everything is in a constant state of flux. There’s no way to avoid loss, so anticipate it before it happens. Accept it when it happens. And move on after it happens. When one door closes, another one opens. But all things must eventually end. As the old Persian adage states, “This too shall pass.” And much as I hate to admit it, that’s even true of this article!

Art Novak is an Emmy-winning writer, novelist, and Professor Emeritus at Savannah College of Art and Design. artnovakauthor.com

You’re on the Quotes About Life page.