Our music quotes collection covers classical, country, jazz, rock and roll, love songs and more. Music is known as the great unifier as all cultures share in their love of a good song. We’ve collected some of the best insights on music, music making and songs from the likes of performers, composers and song writers. We hope we’ve hit the right note so you don’t have to play it by ear when thinking of a great quotation. Enjoy!

One good thing about music, when it hits you, you feel no pain.
Bob Marley

Music is a weapon in the war against unhappiness.
Jason Mraz

Music is the universal language of mankind.
Henry Wadsworth Longfellow

Music is like a dream. One that I cannot hear.
Ludwig van Beethoven 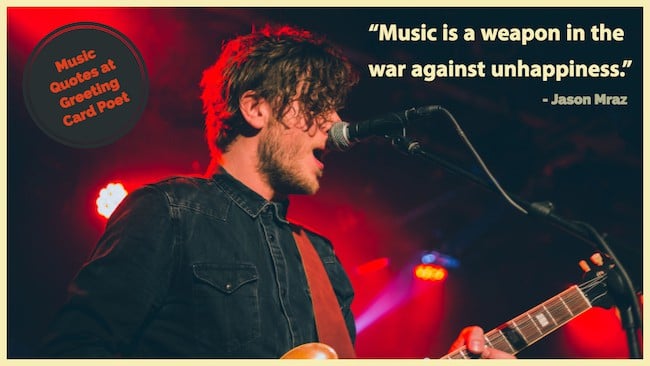 Without jazz, life would be a mistake.
Boris Vian

Music washes away from the soul the dust of everyday life.
Berthold Auerbach

If words are the lyrics, and laughter the melody, then a relationship becomes a symphony.
Nicholas Sparks

Music should be your escape.
Missy Elliott

Great melody over great riffs is, to me, the secret of it all.
Steven Tyler

Music is the divine way to tell beautiful, poetic things to the heart.
Pablo Casals 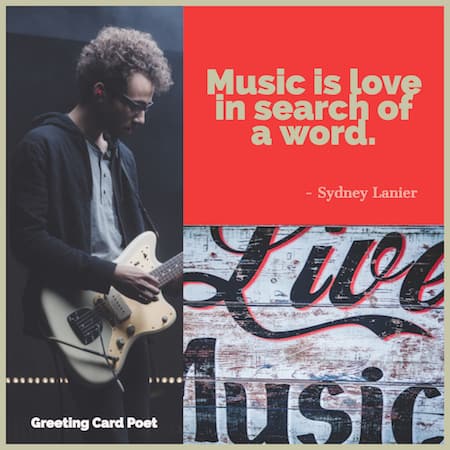 You have to grow up, start paying the rent and have your heart broken before you understand country.
Emmylou Harris

It was probably storytelling before it was songwriting, as far as country music is concerned. It’s fun to be a part of that and tip the hat to that. You know, and keep that tradition alive.
Chris Stapleton

Country music is the people’s music. It just speaks about real life and about truth and it tells things how they really are.
Faith Hill

Three chords and the truth – that’s what a country song is. There is a lot of heartache in the world.
Willie Nelson

I still feel like that 17-year-old-kid that fell in love with country music.
Dierks Bentley

I was introduced to country music around a campfire on a farm.
Gavin DeGraw 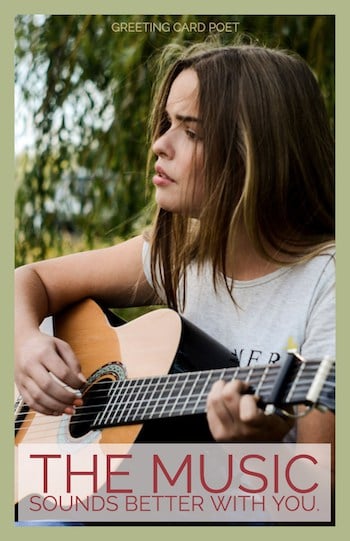 I would teach children music, physics, and philosophy; but most importantly music, for the patterns in music and all the arts are the keys to learning.
Plato

Every soul is a melody which needs renewing.
Stephane Mallarme

How is it that music can, without words, evoke our laughter, our fears, our highest aspirations?
Jane Swan

A symphony must be like the world. It must contain everything.
Gustav Mahler

Life, he realized, was much like a song. In the beginning there is mystery, in the end, there is confirmation, but it’s in the middle where all the emotion resides to make the whole thing worthwhile.
Nicholas Sparks

Music to My Ears

Music produces a kind of pleasure which human nature cannot do without.
Confucius

Music is the strongest form of magic.
Marilyn Manson

Next to the word of God, the noble art of music is the greatest treasure in the world.
Martin Luther

Music is a world within itself, with a language we all understand.
Stevie Wonder

Immerse yourself in nature’s symphony
and let your senses burst with joy.
Tom Brown, Jr.

Music is a way to dream together and go to another dimension.
Cecilia Bartoli

A Jazz man should be saying what he feels: humor, sadness, joy all the things that humans have.
Bob Brookmeyer

Music is a higher revelation than all wisdom and philosophy.
Ludwig Van Beethoven

Music is forever; music should grow and mature with you, following you right on up until you die.
Paul Simon

After silence, that which comes nearest to expressing the inexpressible is music.
Aldous Huxley

To stop the flow of music would be like the stopping of time itself; incredible and inconceivable.
Aaron Copland

It’s like stepping into a river and joining the flow. Every moment in the river has its song.
Michael Jackson 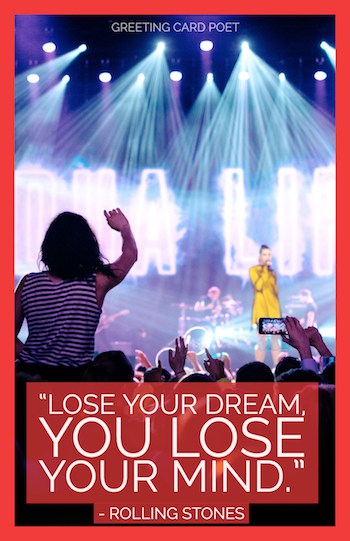 If music be the food of love, play on, give me excess of it; that surfeiting, the appetite may sicken, and so die.
William Shakespeare

Life is a song, love is the music.
Unknown

This love is difficult, but it’s real.
Taylor Swift

Love is all you need.
The Beatles

Our love is like a song,
But you won’t sing along.
Demi Lovato

The story of life is quicker than the wink of an eye,
The story of love is hello and goodbye…until we meet again.
Jimi Hendrix 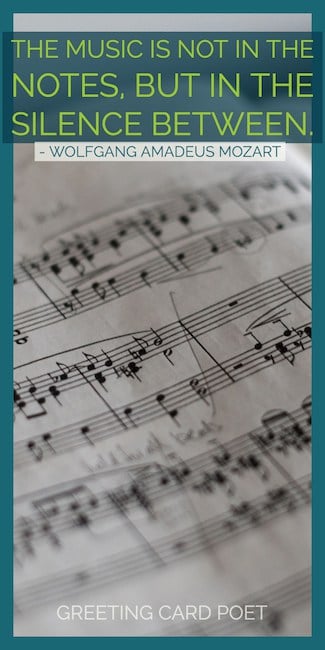 Music gives a soul to the universe, wings to the mind, flight to the imagination and life to everything.
Plato

If I had my life to live over again, I would have made a rule to read some poetry and listen to some music at least once every week.
Charles Darwin

The music is not in the notes, but in the silence between.
Wolfgang Amadeus Mozart (One of editor’s favorite music quotes)

Music is what tells us that the human race is greater than we realize.
Napoleon Bonaparte

You can chase a Beethoven symphony all your life and never catch up.
Andre Previn

Music is God’s little reminder that there’s something else besides us in this universe.
Robin Williams

If I were not a physicist, I would probably be a musician. I often think in music, I live my daydreams in music. I see my life in terms of music.
Albert Einstein

A painter paints pictures on canvas. But musicians paint their pictures on silence.
Leopold Stokowski

Beethoven’s Fifth Symphony is the most sublime noise that has ever penetrated into the ear of man.
E. M. Forster

Music was my refuge. I could crawl into the space between the notes and curl my back to loneliness.
Maya Angelou

All music is folk music. I ain’t never heard a horse sing a song.
Louis Armstrong

Talking about music is like dancing about architecture.
Steve Martin

I smash guitars because I like them.
Pete Townshend

All the good music has already been written by people with wigs and stuff.
Frank Zappa

Jazz is a beautiful woman whose older brother is a policeman.
Sid Caesar

If in the afterlife there is not music, we will have to import it.
Domenico Cieri

Do it again on the next verse, and people think you meant it.
Chet Atkins

A gentleman is someone who can play the accordion, but doesn’t.
Tom Waits

To listen is an effort, and just to hear is no merit. A duck hears also.
Igor Stravinsky 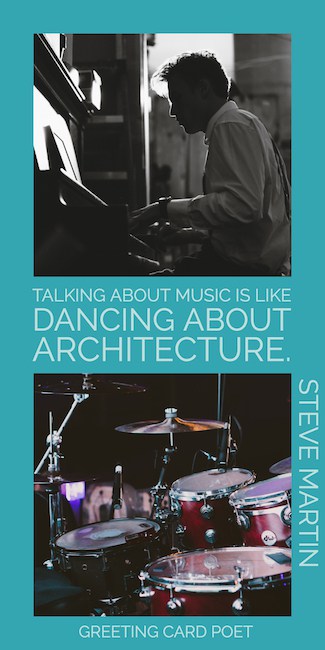 When we die, we will turn into songs, and we will hear each other and remember each other.
Rob Sheffield

When I look into your eyes I still get weak And when I’m this close to you I just can’t speak And it’s hard to keep my hands to myself When I know I could never love anybody else.
Gary Allan

Our sweetest songs are those of saddest thought.
Percy Bysshe Shelley

Lose your dream, you lose your mind.
Rolling Stones

A good song takes on more meaning as the years pass by.
Bruce Springsteen

Finally content with a past I regret, I’ve found you find strength in your moments of weakness.
Rascal Flatts

You can write songs in New York because it’s not always perfect. To write a good song, things can’t be perfect.
Tom Odell

Without music, life would be a mistake
Friedrich Nietzsche

Music is love, love is music, music is life, and I love my life. Thank you and good night.
A. J. McLean

Without music, life is a journey through a desert.
Pat Conroy

Music is a moral law. It gives soul to the universe, wings to the mind, flight to the imagination, and charm and gaiety to life and to everything.
Plato

Music is the heart of life. She speaks love. Without it, there is no possible good. And with it, everything is beautiful.
Franz Liszt

Without music, life would be a blank to me.
Jane Austen

Life seems to go on without effort when I am filled with music.
George Eliot

We are each but a quarter note in a grand symphony.
Guy Laliberte

Music in the soul can be heard by the universe.
Lao Tzu

Music is my religion.
Jimi Hendrix

The only truth is music.
Jack Kerouac

Note: If you have any suggestions for music quotes you’d like to see included, please let us know via the contact page. Thanks.

Quotations that Strike the Right Note

Music is the wine that fills the cup of silence.
Robert Fripp

Jazz is about being in the moment.
Herbie Hancock

The song is ended, but the melody lingers on.
Irving Berlin

Music is the shorthand of emotion.
Leo Tolstoy