You are here: Home / 55 Creativity Quotes for the Playful Mind

Being creative is easier said, than done. Our collection of creativity quotes will give you various authors, artists, and entrepreneurs’ take on being creative. The sayings provide perspective on what is creativity, how to harness it, and directions on approach. If you’re looking for the spark to set off your innovative flame, you just might find it here. Enjoy. 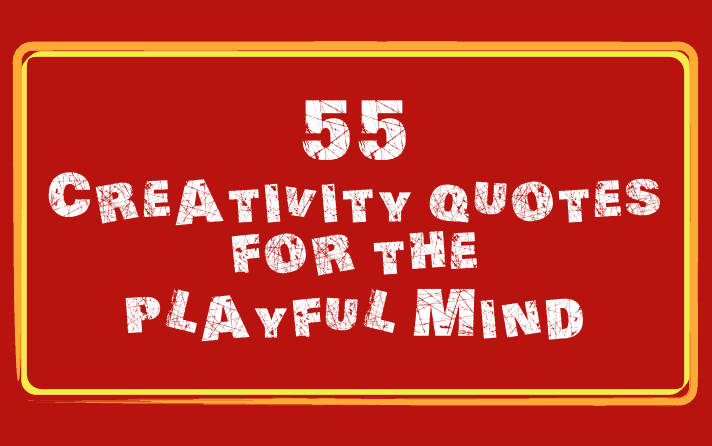 1.) It’s really hard to design products by focus groups. A lot of times, people don’t know what they want until you show it to them.

2.) Life is about creating and living experiences that are worth sharing.

4.) Innovation distinguishes between a leader and a follower.

5.) Creativity is just connecting things. When you ask creative people how they did something, they feel a little guilty because they didn’t really do it, they just saw something. It seemed obvious to them after a while.

6.) Innovation comes from people meeting up in the hallways or calling each other at 10:30 at night with a new idea, or because they realized something that shoots holes in how we’ve been thinking about a problem. It’s ad hoc meetings of six people called by someone who thinks he has figured out the coolest new thing ever and who wants to know what other people think of his idea.

7.) We tried to make something much more holistic and simple. When you first start off trying to solve a problem, the first solutions you come up with are very complex, and most people stop there. But if you keep going, and live with the problem and peel more layers of the onion off, you can often times arrive at some very elegant and simple solutions.

1.) Design is a funny word. Some people think design means how it looks. But of course, if you dig deeper, it’s really how it works. The design of the Mac wasn’t what it looked like, although that was part of it. Primarily, it was how it worked.

2.) In most people’s vocabularies, design means veneer. It’s interior decorating. It’s the fabric of the curtains of the sofa. But to me, nothing could be further from the meaning of design. Design is the fundamental soul of a human-made creation that ends up expressing itself in successive outer layers of the product or service.

3.) Picasso had a saying. He said, ‘Good artists copy, great artists steal.’ And we have always been shameless about stealing great ideas and I think part of what made the Macintosh great was that the people working on it were musicians and poets and artists and zoologists and historians who also happened to be the best computer scientists in the world.

40 Ways to Boost Your Creativity Video

Mike is a toy inventor, author, and editor of Greeting Card Poet.

You’re on the creativity quotes page.