You are here: Home / Simile Examples, Definition, Vs Metaphor

A good simile goes with good writing like two peas in a pod. It’s not always as easy as A-B-C to come up with a strong simile, but it’s usually worth the effort.

Why write with similes? It makes your writing more interesting. It’s as plain as day that readers like to be engaged and comparing different feelings to real, concrete examples via the use of a simile or two, makes your communication more relatable. And that is a good thing!

Before we list some examples, let’s start with a definition. What does simile mean?

What is a Simile?

A simile is a figure of speech that is used to compare one thing with a different thing in order to create a vivid picture for the reader. A simile typically contains words like or as when making a comparison.

While an analogy is different than a simile in that the comparison in an analogy is really a “logical argument” of how two things are similar. Similes take two unlike things and compare them in a way that allows readers to visualize the comparison in an understandable way. A simile is an example of figurative language which means it is used to make the written word more effective and expressive to the reader. 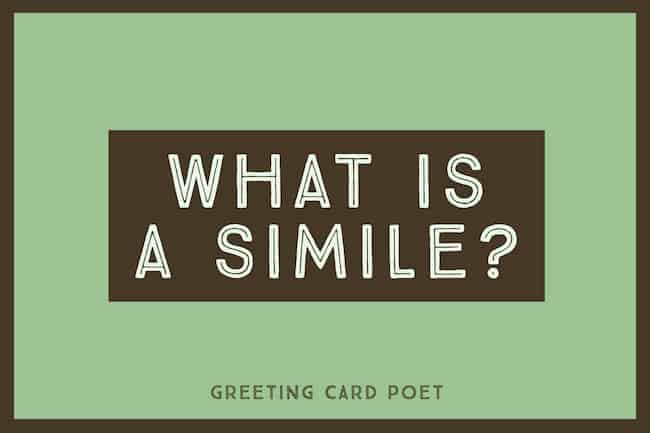 Using Similes in a Sentence

Similes are very commonly used in everyday speech and maybe the best-known example of figurative speech. The use of figurative language like similes is important for good writing because it adds to the reader’s experience by enhancing a setting, description, or character and making these things more “real.”

A talented writer can use similes, metaphors, and analogies to transform ordinary writing into extraordinary writing. Similes should be easy to understand, engage the reader’s emotions, be original, entertaining, and most importantly they should be visually stimulating. For example, “…she tried to get rid of the kitten which has scrambled up her back and stuck like a burr out of reach.” Little Women, Louisa May Alcott.

Similes are incredibly prevalent in their use in day to day conversations. You will recognize many of these simile examples and feel free to use them in your writings or conversations. Similes are classic sayings that immediately conjure an image when they are read or heard. 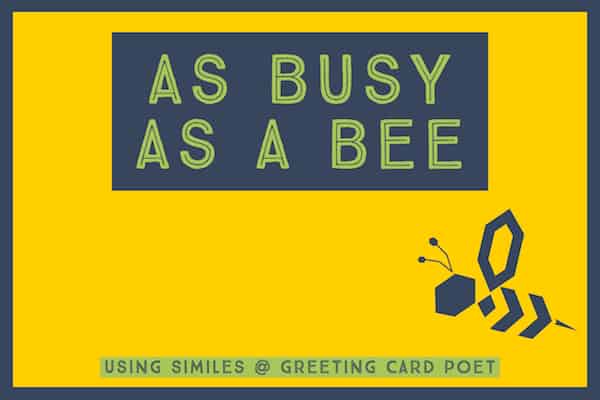 Here are some examples of classic, well-worn similes:

3.) Without his glasses, he was as blind as a bat.

4.) Under pressure, she was as cool as a cucumber.

6.) The newborn baby was as innocent as a lamb.

7.) The point you just made is as clear as mud.

11.) The basketball player was as tall as a giraffe.

As Good as Gold Examples

17.) The play moved as slow as molasses.

20.) It was as exciting as watching paint dry. 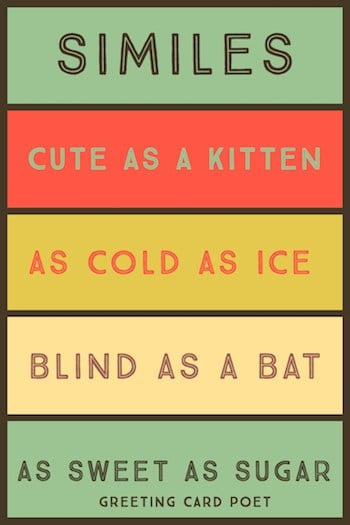 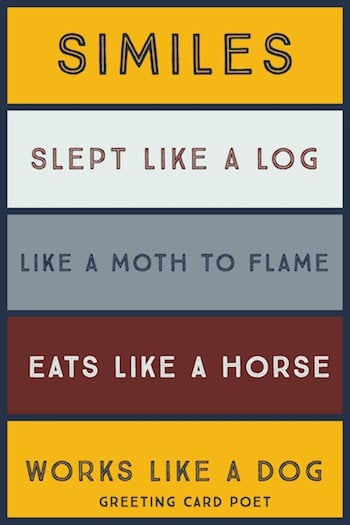 42.) The sergeant barked his orders like a mad dog.

43.) The boys were really happy, like a dog with two tails.

Like other literary devices, authors love to use similes to create vivid visualization. In poems, plays, and books, similes go a long way to explain and clarify situations, characters, and scenes. Here are some examples of Similes in Literature:

46.) I wandered lonely as a cloud that floats on high o’er vales and hills.
William Wordsworth

47.) Kate inched over her own thoughts like a measuring worm.
John Steinbeck

48.) …impressions poured in upon her of those two men, and to follow her thought was like following a voice which speaks too quickly to be taken down by one’s pencil.
Virginia Woolf

49.) Her father had inherited that temper; and at times, like antelope fleeing before a fire on the slope, his people fled from his red rages.
Zane Grey

50.) Elderly American ladies leaning on their canes listed toward me like towers of Pisa.
Vladimir Nabokov

51.) …when I laid down the paper, I was aware of a flash – rush – flow – I do not know what to call it – no word I can find is satisfactorily descriptive – in which I seemed to see the bedroom passing through my room, like a picture impossibly painted on a running river.
Charles Dickens

52.) She entered with an ungainly struggle like some huge awkward chicken, torn, squawking, out of its coop.
Sir Arthur Conan Doyle

53.) He looks like right after the maul hits the steer and it is no longer alive and doesn’t yet know it is dead.
William Faulkner

54.) The late afternoon sky bloomed in the window for a moment like the blue honey on the Mediterranean.
F. Scott Fitzgerald, The Great Gatsby

55.) Time has not stood still. It has washed over me, washed me away as if I’m nothing more than a woman of sand, left by a careless child too near the water.
Margaret Atwood

56.) I would have given anything for the power to soothe her frail soul, tormenting itself in its invincible ignorance like a small bird beating about the cruel wires of a cage.
Joseph Conrad

57.)  In the eastern sky, there was a yellow patch like a rug laid or the feet of the coming sun.
Stephen Crane

58.) Her romantic mind was like the tiny boxes, one within the other, that come from the puzzling East…
J.M. Barrie

59.) …utterly absorbed by the curious experience that still clung to him like a garment.
Lloyd C. Douglas

60.) The very mystery of him excited her curiosity like a door that had neither lock or key.
Margaret Mitchell

61.) Camperdown, Copenhagen, Trafalgar – these names thunder in memory like the booming of great guns.
Charles Nordhoff and James Norman Hall

62.) Past him, ten feet from his front wheels flung the Seattle Express like a flying volcano.
Sinclair Lewis

63.) The water made a sound like kittens lapping.
Marjorie Kinnan Rawlings

64.) Some starlings had alighted on a wire overhead in perfect progression like a piece of knotted string fallen slantwise.
Cormac McCarthy

65.) Moments before are when she feels most alive, leaping across fragments of the day, bringing each moment into the bed with her like a child with schoolbooks and pencils.
Michael Ondaatje

It’s amazing, almost every popular song has at least one simile in it. Similes are great for songwriters because they allow the writer to embellish their lyrics by allowing the listener to imagine imagery in their mind’s eye. Here are examples of similes in popular music, some of these similes you may be able to use in your own writing:

67.) And it seems to me that you lived your life like a candle in the wind. Never knowing who to cling to, When the rain set it.
Elton John

68.) New money, suit, and tie, I can read you like a magazine.
Taylor Swift

69.) You are like a hurricane, there’s calm in your eye. And I’m gettin’ blown away.
Neil Young

72.) I’m on your side when times get rough, and friends just can’t be found, Like a bridge over troubled water, I will lay me down.
Simon & Garfunkel

73.) This rhythm really fits like a snug glove.
A Tribe Called Quest

76.)  Privately divided by a world so undecided. and there’s nowhere to go in between the cover of another perfect wonder. And it’s so white as snow.
Red Hot Chili Peppers

78.) At a truck stop diner just outside of Lincoln. The night is black as the coffee he was drinking.
Zac Brown Band

79.) You’re the DJ, I’ll be the driver. You put your feet up in the getaway car. I’m flying fast like a wanted man. I want you, baby like you can’t understand.
John Mayer

80.) Little girl’s got a hold on me like Glue.
Black Keys

81) Now bring my boys in, their skin in craters like the moon. The moon we love like a brother, while he glows through the room.
Lorde

82.) Do not speak as loud as my heart.
Coldplay

85.) I came in like a wrecking ball.
Miley Cyrus

86.) Love to see you shine in the night like the diamond you are. I’m on the other side, it’s alright, just hold me in the dark. Khalid

87.) We push and pull like a magnet do.
Ed Sheeran

88.) She acts like summer and walks like rain. Reminds me that there’s a time to change, hey, hey. Since the return of her stay on the moon. She listens like spring and she talks like June, hey, hey.
Train

89.) I’ll worship like a dog at the shrine of your lies.
Hozier

90.) You’re as cold as ice, you’re willing to sacrifice our love.
Foreigner

92.) How does it feel, To be without a home, Like a complete unknown, Like a rolling stone?
Bob Dylan

93.) I’m the king, ain’t no discussion. And now we blowing up like spontaneous human combustion.
Logic

94.) Oh, Ophelia, you’ve been on my mind girl like a drug. Oh, Ophelia, heaven help a fool who falls in love.
Lumineers

95.) I was choking in the crowd. Building my rain up in the cloud. Falling like ashes to the ground. Hoping my feelings, they would drown.
Imagine Dragons

Can’t get enough info on similes? Check out the meaning of epic simile with an example from Homer’s The Illiad and The Odyssey.

Here’s a clever simile, “Tim Moodie is to writing as a duck is to water.” Okay, so it’s not that clever, but it is fairly true. For Tim, writing has always come easy. In fact, essay tests are the only reason he graduated from college.

He’s written everything from the script for the Wayne’s World Video Game for Mattel to an article about toys for mentalfloss.com, and from TV Commercials for One Hour Martinizing to ghostwriting jokes for an author’s book tour. Developing good writing skills makes you better at whatever you choose to do in life.

Love Quotes — There are lots of good similes in love quotations, e.g., “Love is like the moon; when it does not increase, it decreases.” — Segur