You are here: Home / Writing With Metaphors: Definition, Examples, List

To understand how to use a metaphor to express yourself will make you a better writer. Well-written metaphors make your sentences or verses more interesting and engaging.

Let’s start at the beginning with a definition before moving on to good metaphor examples in ad slogans, literature, and music.

A metaphor is a figure of speech that employs a word or phrase that is a symbol of something else, but not literally correct. However, a well-crafted metaphor can help explain a concept by making a comparison that the reader readily understands and can visualize.

A metaphor is essentially divided into two parts, first, the subject that is to be compared, and second, the object whose attributes the subject will be compared to. As in many of our modern-day literary tools, the term and use of metaphors started in Greek, then went into Latin with “metaphoria,” and from that worked its way into day to day English.

Here’s one thing to remember: A metaphor says that one thing is another.

So, when folks ask you, “What is a Metaphor?” you have an answer.

A metaphor basically suggests an analogy between two seemingly disparate items that become connected through our imagination. While metaphors and similes are both used to make comparisons and are both examples of figurative language, similes always use the words like or as to make a comparison and metaphors make the comparison directly.

This wording difference means a simile is technically a metaphor, but a metaphor is not a simile. Confused? For example, “she is as beautiful as a flower,” (simile) versus, “she is a flower.”

To say someone is metaphorically speaking means that they are figuratively speaking — not literally speaking. It’s not really true, but it’s being said for comparison purposes and to write or talk creatively.

Metaphor in a Sentence

A metaphor features an “implied comparison” such as “a giant spotlight hit us as the sun rose.” Obviously, the sun is not a giant spotlight but the picture that is created of a giant blinding light representing the sun is very effective. Another well-worn metaphor is “he is the black sheep of the family.” Here, the implied meaning is that a “black sheep” is different and perhaps undesirable. Just for the record, I am the black sheep of my family.

At Greeting Card Poet, we’ve put together a comprehensive list of metaphors for you to enjoy and perhaps use in your own writings or greetings. We’ve started the list by polling our expert panel to come up with the 15 best metaphors of all time.

4.) Hearing his voice was music to my ears.

5.) Her words cut deeper than a knife.

7.) She was fishing for compliments. 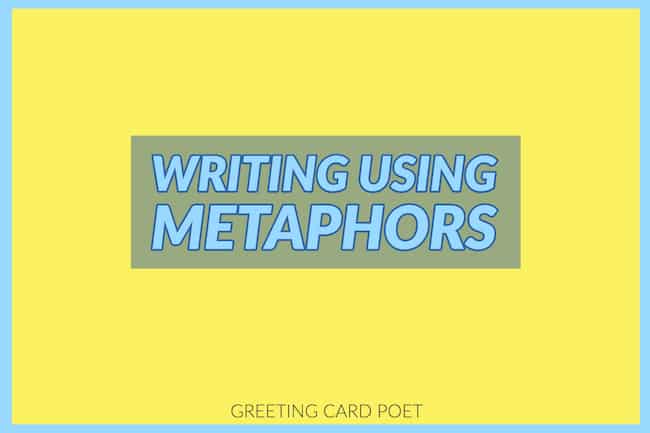 Good Metaphors in Slogans and Advertising

Since metaphors offer the opportunity to make sometimes outrageous comparisons, it only makes sense that they are popular for use in slogans and advertising. Just like hyperboles, metaphors offer advertisers the opportunity to create visual impact in the consumer’s mind and can give an implied value to their goods or service. Here are some examples of metaphors that have been effectively used in slogans and advertising over the years:

17.) It takes a licking and keeps on ticking.
Timex

19.) All the news that’s fit to print.
The New York Times

23.) A diamond is forever.
DeBeers

24.) Your Daily Ray of Sunshine.
Tropicana

27.) The pause that refreshes.
Coca-Cola

29.) Let your fingers do the walking.
Yellow Pages

Authors love to use metaphors to elicit a response from their readers that is equally emotional and visual. The pictures they paint with metaphors help convey the message of their writings. In literature, metaphors help explain a situation, illustrate a character, set a scene, or even establish a certain mood. Metaphors provide emphasis and make passages more vivid and real. Here are some examples of metaphors in literature:

31.) All the world’s a stage, and all the men and women merely players; they have their exits and entrances, and one man in his time plays many parts, his acts being in seven ages.
William Shakespeare

32.) But my heart is a lonely hunter that hunts on a lonely hill.
William Sharp

33.) Men’s words are bullets, that their enemies take up and make use of against them.
George Savile

34.) The rain came down in long knitting needles.
Enid Bagnold

35.) Memory is a crazy woman that hoards colored rags and throws away food.
Austin O’Malley

36.) Time is a dressmaker specializing in alterations.
Faith Baldwin

38.) The sun in the west was a drop of burning gold that slid nearer and nearer the sill of the world.
William Golding

39.) Her mouth was a fountain of delight.
Kate Chopin

40.) The parents looked upon Matilda in particular as nothing more than a scab. A scab is something that you put up with until the time comes when you can pick it off and flick it away.
Roald Dahl

41.) The streets were a furnace, the sun an executioner.
Cynthia Ozick

42.) Love is an alchemist that can transmute poison into food – and a spaniel that prefers even punishment from one hand to caresses from another.
Charles Caleb Colton

43.) Language is a road map of a culture. It tells you where its people come from and where they are going.
Rita Mae Brown

44.) Between the lower east side tenements, the sky is a snotty handkerchief.
Marge Piercy

45.) Well you keep away from her because she’s a rattrap if I ever seen one.
John Steinbeck

46.) Delia was an overbearing cake with condescending frosting and frankly, I was on a diet.
Maggie Stiefvater

47.) The sun was a toddler insistently refusing to go to bed. It was past eight-thirty and still light.
John Green

48.) If you can look into the seeds of time and say which grains will grow and which will not speak to me.
William Shakespeare

49.) Memories are bullets. Some whiz by and only spook you. Others tear you open and leave you in pieces.
Richard Kadrey

50.) Wishes are thorns he told himself sharply. They do us no good, just stick into our skin and hurt us.
Frances Hardinge

Songwriters delight in painting a picture with music and words for the pleasure of their listeners. Since songwriting began, metaphors have been an integral part of the lyrics of many popular songs. Here are some examples of metaphors in songs:

51.) You ain’t nothin’ but a hound dog, Cryin’ all the time.
Elvis Presley

53.) Life is a highway I wanna ride it all night long.
Rascal Flatts

55.) You are my fire. The one I desire. Believe when I say, I want it that way.
Backstreet Boys

56.) I’m walking on sunshine. And don’t it feel good.
Katrina and the Waves 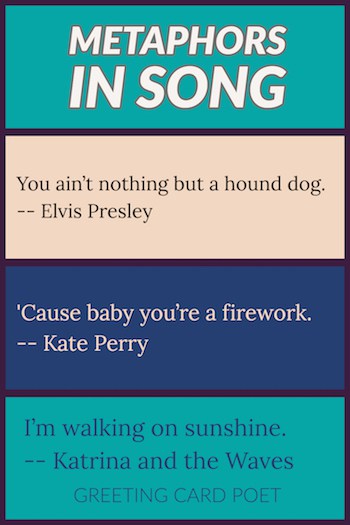 57.) Third floor on the West Side, me and you Handsome, you’re a mansion with a view.
Taylor Swift

58.) Life is Monopoly go cop me some land and some property.
Migos

59.) My lover’s got humor. She’s the giggle at a funeral. Knows everybody’s disapproval. I should’ve worshipped her sooner.
Hozier

61.) Fire away, fire away. You shoot me down, but I won’t fall. I am titanium.
David Guetta

62.) I’m a hot air balloon that could go to space. With the air, like I don’t care baby by the way.
Pharrell Williams

64.) I have faith in what I see. Now I know I’ve met an angel in person. she looks perfect. Oh, I don’t deserve this. You look perfect tonight!
Ed Sheeran

65.) You’re a fallen star. You’re a getaway car. (And) You’re a line in the sand. When I go too far. You’re the swimming pool on an August day. And you’re the perfect thing to say.
Michael Buble

Not unlike clichés, a dead metaphor is a metaphor that has been used so much that it becomes irrelevant.

72.) Falling head over heels in love.

78.) Time to batten down the hatches.

* Both metaphors refer to horse racing. A “curb” is the strap on a horse’s harness that goes under the lower jaw of a horse and it controls the bit to signal the horse. Sometimes written as “chomping at the bit” which is incorrect. It is a horse racing reference about a horse that will chew or bite the “bit,” the part of the harness that goes in the horse’s mouth. It means that the horse is ready to race and anxious to start, so this metaphor was used to describe a nervous, anxious, or highly motivated individual. People today, however, have no idea what these terms mean.

Here are some very simple metaphors that are great illustrations to help kids understand what a metaphor is and how it is used. It gives kids a chance to see that this type of figure of speech can be found in our everyday conversations. By examining and sharing this list with kids, it will also improve their reading skills.

96.) A blanket of snow covered the ground.

112.) But soft! What light through yonder window breaks? It is the East, and Juliet is the sun!
William Shakespeare, from Romeo and Juliet

113.) He is a bright star, shining for all to see, and helping to guide everyone to safety.

114.) A painter is an animal. Untamed and free to express his or her feelings and emotions.

115.) The human brain is a wonder. A flesh and blood computer that is more powerful than anything created by man.

116.) Her eyes are headlights. Bright and powerful and aimed directly at you.

Without using specific terms, an implied metaphor compares two things simply by placing them side by side and not referring one to the other.

117.) Using her considerable skills, Mary lured Allen into her web.

118.) The traffic cop barked commands at the growing crowd.

119.) He failed miserably and left the meeting with his tail between his legs.

120.) The reporters circled nervously around the newly minted candidate.

121.) Henry squawked when his wife asked him to do some chores.

A mixed metaphor combines several comparisons together without any real logic, but in a way that delivers an interesting message.

122.) The new legislation has a flash of momentum, but the opposition is a steamroller on a fast track.

123.) Caught in a lie, Howard knew the rubber would meet the road and the only thing he could do was punt.

124.) Read the writing on the wall John, you must wake up and smell the coffee.

125.) It could open a can of worms exposing old wounds.

127.) The bases are loaded…so this is where the rubber meets the road and we determine whether Johnson is in a league of his own.

Tim Moodie is the Shakespeare of Greeting Card Poet. (See what I did there.) Yes, a metaphor to describe the author. Tim has been writing using all the creative tools, including metaphors, his entire adult life. He’s written everything from the script for the Wayne’s World Video Game for Mattel to an article about toys for mentalfloss.com. It may be debatable whether we should call him the bard, but he is prolific.

Hyperbole Examples to Blow Your Mind 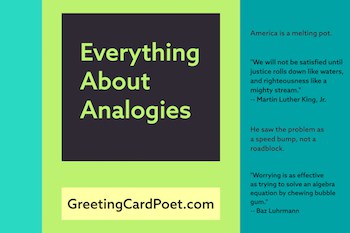