You are here: Home / All About Alliteration: Definition, Examples, Poems

Many people believe that an alliteration must contain at least two words starting with the same letter. This is not true. It can also be two or more words that start with the same sound.

For example, “Peter Piper picked a peck of pickled peppers,” “She sells seashells by the sea-shore,” and, “Jerry Jordan’s jelly jar and jam” are alliterations. They are tongue twisters, too. The repetitions of sounds make alliteration examples easy to identify.

Any word in a sentence can begin an alliteration. The word does not have to start at the beginning of the sentence. Alliteration is a literary device that is typically used to be witty, thought-provoking, or evocative. Modern writers tend to use same letter alliterations, while traditional and classic writers tended to us alliterations that star with the same consonant sound.

Not every word in a sentence needs to be alliterative, propositions, pronouns, and other small illustrative words can also be part of the sentence. For example, “Good as gold” and “Phoebe and Fred went on a date” are both alliteration examples.

1.) She sells seashells by the seashore.

3.) Round the rough and rugged rock, the ragged rascal rudely ran.

10.) A proper cup of coffee from a proper copper coffee pot.

14.) These thousand tricky tongue twisters trip thrillingly off the tongue. 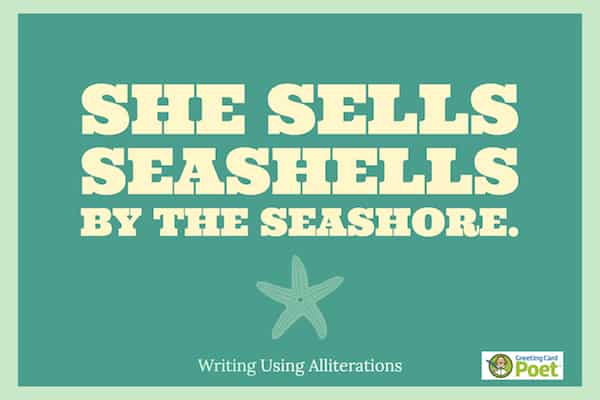 15.) If a dog chews shoes, whose shoes does he choose?

17.) Of all the felt I ever felt,
I never felt a piece of felt
which felt as fine as that felt felt
when first I felt that felt hat’s felt.

20.) I wish to wash my Irish wristwatch. 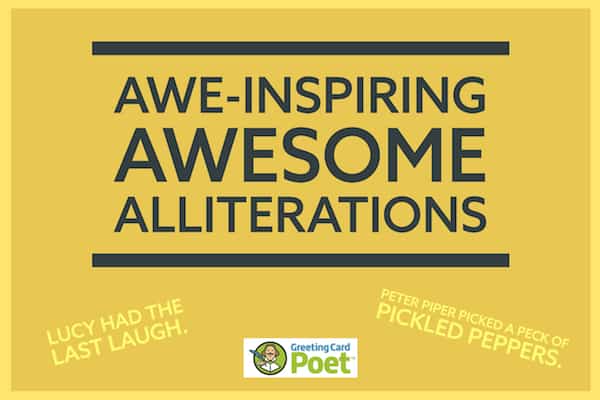 That’s Easy for You To Say

35.) I thought, I thought of thinking of thanking you.

Alliteration in Advertising, Brands, and Companies 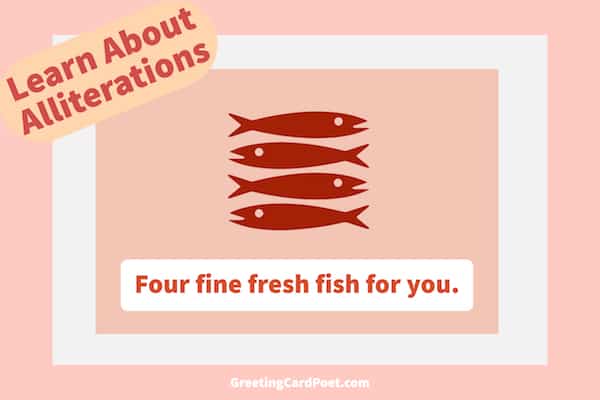 81.) Made to make your mouth water.
Opal Fruits

85.) The Daily Diary of the American Dream.
The Wall Street Journal

A literary device found frequently in classic written works is alliteration. It has been used in poems, novels, plays, songs, and more. I can be a great way to add emphasis to a point or description and help the reader picture characters and scenes in their minds. Here are some examples of alliterations in literature:

91.) While I nodded, nearly napping, suddenly there came a tapping, As of someone gently rapping, rapping at my chamber door.
Edgar Allan Poe

92.) The sibilant sermons of the snake as she discoursed upon the disposition of my sinner’s soul seemed ceaseless.
Gregory Kirschling

93.) The Soul selects her own Society – Then – shuts the Door.
Emily Dickinson

94.) They click upon themselves/ As the breeze rises, and turn many-colored/ As the stir cracks and crazes their enamel.
Robert Frost

95.) So we beat on, boats against the current, borne back ceaselessly into the past.
F. Scott Fitzgerald

96.) His soul swooned slowly as he heard the snow falling faintly through the universe and faintly falling, like the descent of their last end, upon all the living and the dead.
James Joyce

97.) My father brought to conversations a cavernous capacity for caring that dismayed strangers.
John Updike

98.) She had no room for gaiety and ease. She had spent the golden time in grudging it’s going.
Dorothy Parker

99.) From forth the fatal loins of these two foes; A pair of star-crossed lovers take their life.
William Shakespeare, Romeo and Juliet

100.) But four hours later the fish was still swimming steadily out to sea, towing the skiff, and the old man was still braced solidly with the line across his back.
Ernest Hemingway

101.) … his appearance: something displeasing, something down-right detestable. I never saw a man I so disliked and yet I scarce know why. He must be deformed somewhere.
Robert Louis Stevenson

102.) …the first unknown phantom in the other world; neither of these can feel stranger and stronger emotions than that man does, who for the first time finds himself pulling into the charmed, churned circle of the hunted Sperm Whale.
Herman Melville

103.) A moist young moon hung above the mist of a neighboring meadow.
Vladimir Nabokov

104.) The fair breeze blew, the water foam flew, the furrow followed free; we were the first that ever burst into that silent sea.
Samuel Taylor Coleridge

105.) Behemoth biggest born of earth upheaved His vastness: Fleeced the flocks and bleating rose, As plants: Ambiguous between sea and land The river horse and scaly crocodile.
John Milton

106.) But on a May morning on Malvern hills, A marvel befell me, of fairy, methought.
I was weary with wandering and went me to rest Under a broad bank by a brook’s side,
And as I lay and leaned over and looked into the waters, I fell into a sleep, for it sounded so merry.”
William Langland

109.) The big, bad bear scared all the baby bunnies in the bushes.

110.) I had to hurry home where grandma was waiting for her waffles.

111.) Please put away your paints and practice the piano.

112.) Three grey geese in a green field grazing. Grey were the geese and green was the grazing.

114.) Shut the shutters before the banging sound makes you shudder.

119.) Kim came to help us cut out a colorful kite for Chris.

120.) Paula’s prancing pony out-performed all the others.

121.) Those lazy lizards are lying like lumps in the leaves.

Kids love candy. So, it stands to reason that some of our favorite candies have alliterative names. They’re catching so you don’t forget their names at your next stop at the candy shop.

So, it only stands to reason that if kids enjoy alliteration, they would want their favorite cartoon characters names with alliterations as well:

Some of our favorite stars would have names that are alliterations, here is a list of a few:

Alliteration makes readers more likely to notice your text. They can set the tone for the text, create a light and fun mood, and make it more memorable. If you’re asked to remember a line from a kids’ book, a Dr. Seuss offering might come to mind. Why? Because he used alliteration generously, e.g. “Auntie Annie’s Alligator” or “Four fluffy feathers on a Fiffer-feffer-feff.” It makes lines catchy, and most kids love it!

We defined it, described it, and detailed 167 examples of alliteration.

Now, it’s your job to put your knowledge to use. If you work with children, have a brainstorming session and see if everyone can come up with some funny ones. Sometimes it helps to narrow the playing field by having them focus on a single topic like animals. The “Hungry Hippos,” “The Curious Cat,” or “Leaping Lizards.” Start with two-word and challenge your group to three-word and four-word examples, or more.

Try them out in daily conversation, texts, emails, and writings. Techniques like alliteration are best used sparingly in most situations. You don’t want your reader to rear back with the repetition and revolt, do you?

OK, so here’s an alliteration: Tim Moodie is a terrible teacher. Well, that’s not technically true (another alliteration). The only two classes I ever taught I did just fine. But, what I really enjoyed being was the class clown and I’ve spent my life trying to recapture that. By doing things like writing the script for the Wayne’s World Video Game, writing funny radio and TV spots, or ghost-writing jokes for an author’s book tour. So maybe you can go back and recapture your younger, youthful days.

You’re on our All About Alliteration page.