You are here: Home / Memorial Day Quotes, Images and Messages

Memorial Day, also known as Decorations Day, is a day to remember and recognize the men and women who died while serving the country in our armed forces. It has also come to be a time to recognize all friends and family members who are now deceased.

The holiday is recognized on the last Monday of May in the United States. Traditionally, many people will visit cemeteries and place flags near graves. While Veterans Day celebrates the service of all veterans who served, Memorial Day recognizes those who died while serving.

To appreciate those veterans who made the ultimate sacrifice, we’ve assembled this collection of Memorial Day quotes, images and messages. The first 10 selections are favorites of our expert panel.

2.) It doesn’t take a hero to order men into battle. It takes a hero to be one of those men who goes into battle.
General Norman Schwarzkopf Jr.

3.) Our nation owes a debt to its fallen heroes that we can never fully repay, but we can honor their sacrifice.
President Barack Obama

4.) How important it is for us to recognize and celebrate our heroes and she-roes!
Maya Angelou

5.) Heroes never die. They live on forever in the hearts and minds of those who would follow in their footsteps.
Emily Potter

6.) The brave die never, though they sleep in the dust,
Their courage nerves a thousand living men.
Minot J. Savage

7.) For the love of the country, they accepted death.
President James A. Garfield

8.) A hero is someone who has given his or her life to something bigger than oneself.
Joseph Campbell

9.) It is foolish and wrong to mourn the men who died. Rather we should thank God that such men lived.
General George S. Patton

10.) And they who for their country die shall fill an honored grave, for glory lights the soldier’s tomb, and beauty weeps the brave.
Joseph Rodman Drake 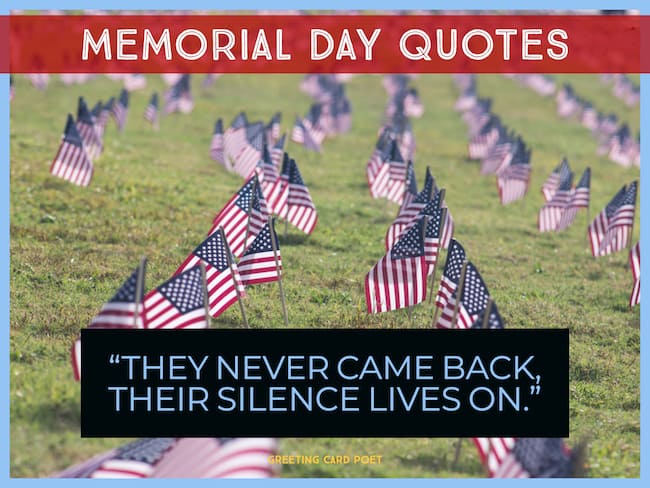 11.) Although no sculptured marble should rise to their memory, nor engraved stone bear record of their deeds, yet will their remembrance be as lasting as the land they honored.
Daniel Webster

12.) Our debt to the heroic men and valiant women in the service of our country can never be repaid. They have earned our undying gratitude. America will never forget their sacrifices.
Harry S. Truman

13.) Decoration Day is the most beautiful of our national holidays… The grim cannon have turned into palm branches and the shell and shrapnel into peach blossoms.
Thomas Bailey Aldrich

14.) Other lands have had heroes, but ours were more–they were saviors, and by their sacrifices have saved the greatest land under the shining sun.
Horace Wilbert Bolton

15.) Memorial Day is one of the most significant and beautiful occasions of the year. It shows the sentiment of the people toward those who gave their lives for a good cause, and it teaches a lesson in patriotism which is without a parallel.
Charles E. Allison

16.) On thy grave, the rain shall fall from the eyes of a mighty nation!
Thomas William Parsons

17.) With the tears, a Land hath shed
Their graves should ever be green.
Thomas Bailey Aldrich 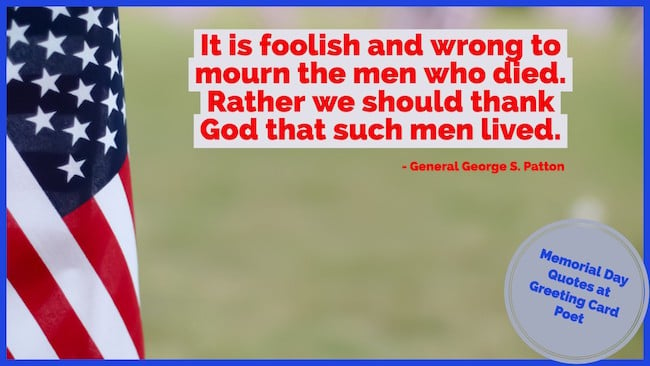 In the United States, Memorial Day is traditionally celebrated on the last Monday of the month of May. In 2020, it falls on Monday, May 25, 2020.

Once referred to as Decoration Day, it commemorates all military servicemen and servicewomen who laid their life for the United States. The day is celebrated by visiting memorials and cemeteries. It is also considered as the day when the summer season starts.

18.) The willingness of America’s veterans to sacrifice for our country has earned them our lasting gratitude.
Jeff Miller

20.) The bravest are surely those who have the clearest vision of what is before them, glory and danger alike, and yet notwithstanding go out to meet it.
Thucydides

21.) America’s Veterans have served their country with the belief that democracy and freedom are ideals to be upheld around the world.
John Doolittle

22.) This nation will remain the land of the free only so long as it is the home of the brave.
Elmer Davis

23.) America’s veterans embody the ideals upon which America was founded more than 229 years ago.
Steve Buyer

25.) Caring for our veterans is the duty of a grateful nation.
Patty Murray

26.) From the world wars of Europe to the jungles of the Far East, from the deserts of the Middle East to the African continent, and even here in our own hemisphere, our veterans have made the world a better place and America the great country we are today.
John Hoeven

27.) Real heroes don’t have a name on the back of their jersey. They have their country’s flag on the arm of a uniform.
Unknown 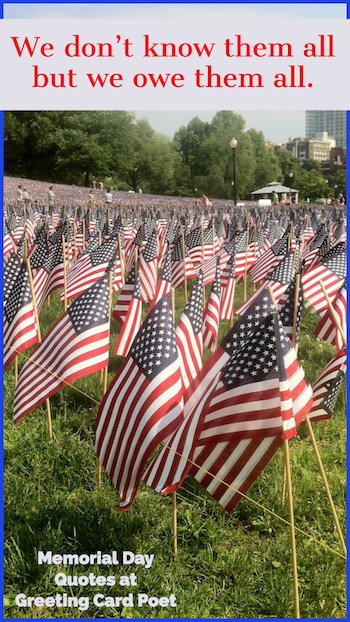 28.) A man’s country is not a certain area of land, of mountains, rivers, and woods, but it is a principle and patriotism is loyalty to that principle.
George William Curtis

29.) What I can do for my country, I am willing to do.
Christopher Gadsden

31.) I only regret that I have but one life to lose for my country.
Nathan Hale

32.) Patriotism is supporting your country all the time, and your government when it deserves it.
Mark Twain

33.) I have long believed that sacrifice is the pinnacle of patriotism.
Bob Riley

34.) Courage is contagious. When a brave man takes a stand, the spines of others are often stiffened.
Billy Graham

35.) There is nothing nobler than risking your life for your country.
Nick Lampson

36.) It is not always the same thing to be a good man and a good citizen.
Aristotle

37.) A man’s country is not a certain area of land, of mountains, rivers, and woods, but it is a principle; and patriotism is loyalty to that principle.
George William Curtis

38.) We can’t all be Washingtons, but we can all be patriots.
Charles F. Browne

39.) They fell, but o’er their glorious grave
Floats free the banner of the cause they died to save.
Francis Marion Crawford 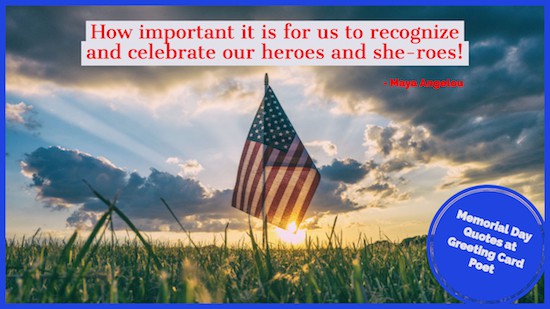 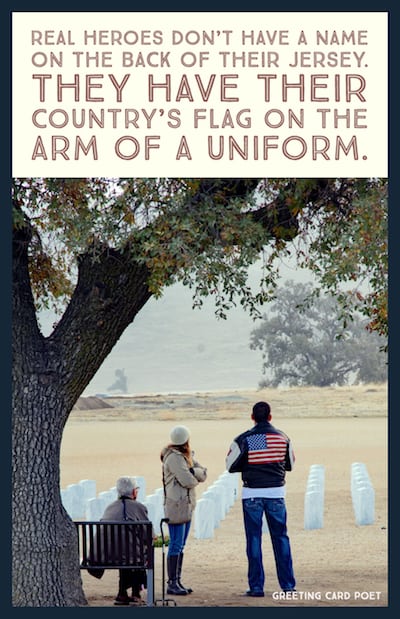 41.) They never came back, their silence lives on.

42.) We are forever grateful for the ultimate sacrifice of those who died for the United States of America. May their courage and dedication will never be forgotten.

43.) Let Memorial Day be a day to count our blessings and remember those who serve to protect our country and our freedom.

44.) On this Memorial Day… let the memories of the dauntless and valiant martyrs be with us.

46.) The brave hearts never die… they sleep in the embrace of their soil.

47.) Remember our fallen heroes. They are the reason that we are free.

48.) We are mourning those who died for the United States to remind ourselves of worthy ideals, virtues, and priorities. May their sacrifice be a constant reminder of things that matter.

It’s a time to say “Thank You” to those who have served our nation. It’s an opportunity to express our gratefulness. It became an official holiday in the United States in 1971.

Many towns and cities across the U.S. celebrate the holiday with parades. Concerts are held in public parks. Citizens visit grave sites of loved ones and raise their flags at home. Many will have picnics, barbecues and family celebrations.  The tradition of wearing a red poppy to recognize those who have died in service continues.

No matter how you celebrate Memorial Day, take a quiet minute to remember our fallen heroes.

These quotes were curated by the editor of Greeting Card Poet. Mike’s father fought in World War II in General Patton’s army.