You are here: Home / Happy Fourth of July Quotes

Happy Fourth of July Quotes speak to many of the great things that make America a very special country. These insights come from Presidents, politicians, comedians, writers and statesmen. For our founding fathers and many who lived through a very difficult time of revolution, the 4th of July had much greater meaning than simply a time to shoot off some bottle rockets and Black Cats. Enjoy these Happy Fourth of July Quotes and take a minute to remember the folks who made America great.

This nation will remain the land of the free only so long as it is the home of the brave.
Elmer Davis

Where freedom is, there is my nation.
Benjamin Franklin

The cement of this union is the heart-blood of every American.
Thomas Jefferson

This country was founded and built by people with great dreams and the courage to take great risks.
Ronald Reagan 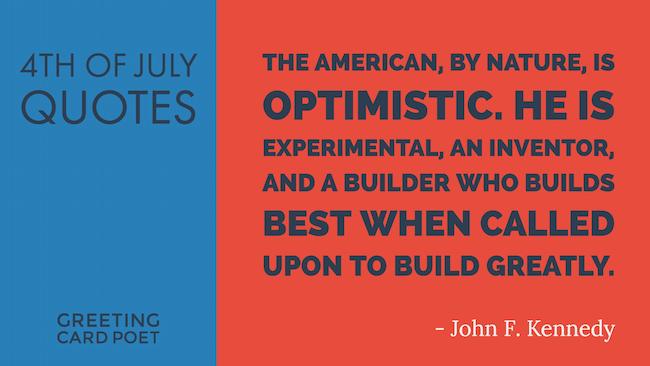 Happy 4th of July! Drink until you see stars… and stripes!
Unknown

Let’s not forget why we celebrate 4th of July, it is the day Will Smith saved us from the aliens.
Unknown

America’s a family. We all yell at each other, and it all works out.
Louis C.K.

It’s Fourth of July weekend, or, as I call it, Exploding Christmas.
Stephen Colbert

You have to love a nation that celebrates its independence every July 4th, not with a parade of guns, tanks, and soldiers who file by the White House in a show of strength and muscle, but with family picnics where kids throw Frisbees, the potato salad gets iffy, and the flies die from happiness. You may think you have overeaten, but it is patriotism.
Erma Bombeck 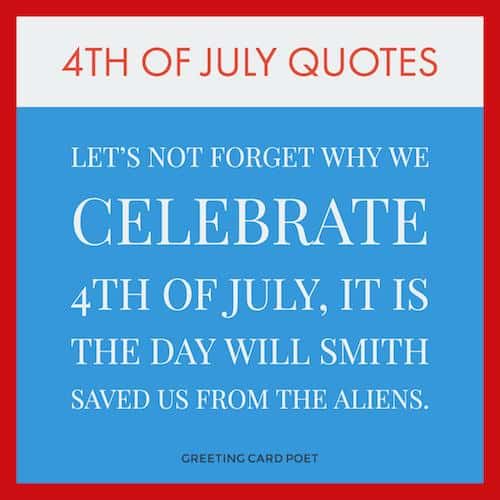 America is a tune.  It must be sung together.
Gerald Stanley Lee

We don’t know them all but we owe them all.
Unknown

I saw courage both in the Vietnam War and in the struggle to stop it. I learned that patriotism includes protest, not just military service.
John Kerry

America is much more than a geographical fact. It is a political and moral fact – the first community in which men set out in principle to institutionalize freedom, responsible government, and human equality.
Adlai Stevenson

Where liberty dwells, there is my country.
Benjamin Franklin 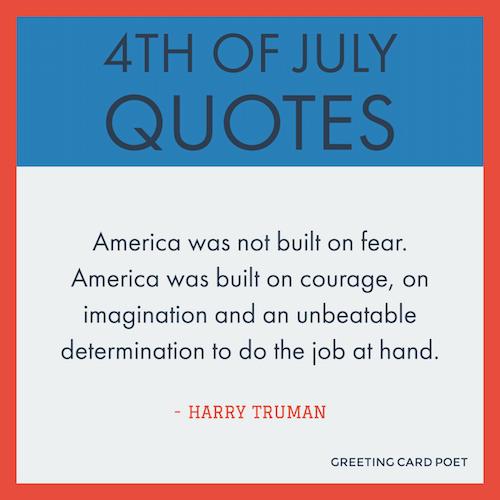 Home of the Free because of the Brave.
Unknown

Whoever would overthrow the liberty of a nation must begin by subduing the freeness of speech.
Benjamin Franklin 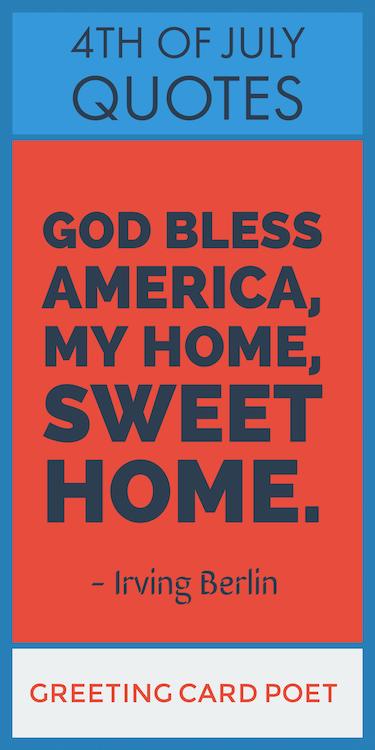 The American, by nature, is optimistic. He is experimental, an inventor, and a builder who builds best when called upon to build greatly.
John F. Kennedy

Liberty means responsibility. That is why most men dread it.
George Bernard Shaw

Then join hand in hand, brave Americans all! By uniting we stand, by dividing we fall.
John Dickinson

Tip: These Happy Fourth of July quotes make great captions to photos of  fireworks exploding in the skies.

Then join hand in hand, brave Americans all! By uniting we stand, by dividing we fall.
John Dickinson

The individuals who hope to procure the favors of opportunity, must, similar to men, experience the weariness of supporting it.
Thomas Paine

True patriotism springs from a belief in the dignity of the individual, freedom and equality not only for Americans but for all people on earth, universal brotherhood and good will, and a constant and earnest striving toward the principles and ideals on which this country was founded.
Eleanor Roosevelt

The advancement and diffusion of knowledge is the only guardian of true liberty.
James Madison

Liberty is the breath of life to nations.
George Bernard Shaw

One flag, one land, one heart, one hand, one nation forevermore!
Oliver Wendell Holmes

Give me liberty or give me death!
Patrick Henry

Flexibility has its life in the hearts, the activities, the soul of men thus it must be every day earned and invigorated – else like a bloom cut from its nurturing roots, it will shrivel and pass on.
Dwight D. Eisenhower

We hold our heads high, despite the price we have paid, because freedom is priceless.
Lech Walesa

There is nothing wrong with America that cannot be cured by what is right with America.
Bill Clinton

Our country is not the only thing to which we owe our allegiance. It is also owed to justice and to humanity. Patriotism consists not in waving the flag, but in striving that our country shall be righteous as well as strong.
James Bryce

America was not built on fear. America was built on courage, on imagination and an unbeatable determination to do the job at hand.
Harry S. Truman

As Mankind becomes more liberal, they will be more apt to allow that all those who conduct themselves as worthy members of the community are equally entitled to the protections of civil government. I hope ever to see America among the foremost nations of justice and liberality.
George Washington

The essence of America—that which really unites us—is not ethnicity, or nationality, or religion. It is an idea—and what an idea it is: that you can come from humble circumstances and do great things. That it doesn’t matter where you came from, but where you are going.
Condoleezza Rice

In the truest sense, freedom cannot be bestowed; it must be achieved.
Franklin D. Roosevelt 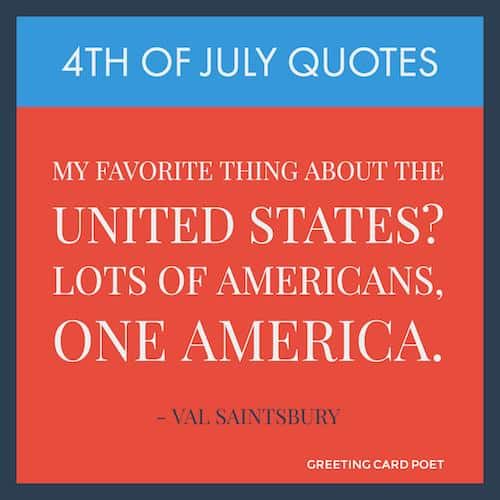 I know not what course others may take; but as for me, give me liberty or give me death!
Patrick Henry

Patriotism is love of country. But you can’t love your country without loving your countrymen and countrywomen. We don’t always have to agree, but we must empower each other, we must find the common ground, we must build bridges across our differences to pursue the common good.
Cory Booker

What to the Slave is the 4th of July?
Frederick Douglass

We on this continent should never forget that men first crossed the Atlantic not to find soil for their ploughs but to secure liberty for their souls.
Robert J. McCracken

We identify the flag with almost everything we hold dear on earth, peace, security, liberty, our family, our friends, our home. . .But when we look at our flag and behold it emblazoned with all our rights we must remember that it is equally a symbol of our duties. Every glory that we associate with it is the result of duty done.
Calvin Coolidge

We need an America with the wisdom of experience. But we must not let America grow old in spirit.
Hubert H. Humphrey

We must be free not because we claim freedom, but because we practice it.
William Faulkner

Over the years, the United States has sent many of its fine young men and women into great peril to fight for freedom beyond our borders. The only amount of land we have ever asked for in return is enough to bury those that did not return.
Colin Powell

We are called the nation of inventors. And we are. We could still claim that title and wear its loftiest honors if we had stopped with the first thing we ever invented, which was human liberty.
Mark Twain

The truth will set you free, but first it will piss you off.
Gloria Steinem

My father described this tall lady who stands in the middle of the New York harbor, holding high a torch to welcome people seeking freedom in America. I instantly fell in love.
Yakov Smirnoff

The country needs and, unless I mistake its temper, the country demands bold, persistent experimentation. It is common sense to take a method and try it: If it fails, admit it frankly and try another. But above all, try something. The millions who are in want will not stand by silently forever while the things to satisfy their needs are within easy reach.

We need enthusiasm, imagination and the ability to face facts, even unpleasant ones, bravely – We need to correct, by drastic means if necessary, the faults in our economic system from which we now suffer. We need the courage of the young. Yours is not the task of making your way in the world, but the task of remaking the world which you will find before you. May every one of us be granted the courage, the faith and the vision to give the best that is in us to that remaking!
Franklin D. Roosevelt

The United States is the only country with a known birthday.
James G. Blaine

My favorite thing about the United States? Lots of Americans, one America.
Val Saintsbury

America is too great for small dreams.
Ronald Reagan

Q. How come there are no knock-knock jokes about America?
A. Because freedom rings.

Q. What did one flag say to the other?
A. Nothing…it just waved.

Q. Why did Paul Revere ride his horse from Boston to Lexington?
A. It was too heavy to carry.

Q. What did George Washington say to his men before they crossed the Delaware?
A. “Men, get in the boat.”

Q. What does the Statue of Liberty Stand for?
A. Because she can’t sit down.

Have any Happy Fourth of July quotes you wanna share? Keep us posted on the Contact page. Thanks.