You are here: Home / Hilarious Quotes to Tickle Your Funny Bone

They say the more you laugh, the longer you live. With that logic, these hilarious quotes can certainly add more hours to your life. Laughter is often touted as the best medicine for good health and a sense of humor can get you through some tough spots. You don’t need a reason to laugh, yet most people find it hard to get any time to indulge in mirth and joy for even a few minutes in a day.

Here are some very funny quotes, by famous men and women, which will certainly bring a smile on your lips or a chuckle. Share with friends and loved ones or read these funny quotes to yourself for fun. Let’s start with the best of the best.

My fake plants died because I did not pretend to water them.
Mitch Hedberg

A lot of people are afraid of heights. Not me, I’m afraid of widths.
Steven Wright

It’s amazing that the amount of news that happens in the world every day always just exactly fits the newspaper.
Jerry Seinfeld

If you could kick the person in the pants responsible for most of your trouble, you wouldn’t sit for a month.
Theodore Roosevelt

A day without sunshine is like, you know, night.
Steve Martin

Before you criticize someone, walk a mile in their shoes. That way, you’ll be a mile from them and have their shoes.
Jack Handey

Better to remain silent and be thought a fool than to speak out and remove all doubt.
Abraham Lincoln 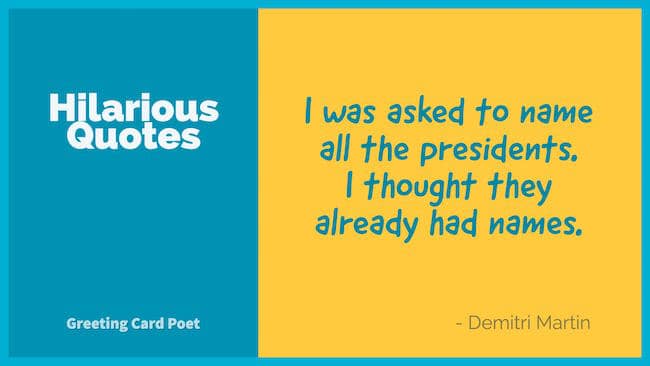 A man is incomplete until he is married. After that, he is finished.
Zsa Zsa Gabor

I distrust camels and anyone else who can go a week without a drink.
Joe E. Lewis

Half the people in Hollywood are dying to be discovered and the other half are afraid they will be.
Lionel Barrymore

I have tried to know absolutely nothing about a great many things, and I have succeeded fairly well.
Robert Benchley

Of course, women don’t work as hard as men. They get it right the first time.
Unknown

I’m all in favor of keeping dangerous weapons out of the hands of fools. Let’s start with typewriters.
Frank Lloyd Wright

I am so clever that sometimes I don’t understand a single word of what I am saying.
Oscar Wilde

Always borrow money from a pessimist. He won’t expect it back.
Oscar Wilde

He taught me housekeeping; when I divorce I keep the house.
Zsa Zsa Gabor

All my life I thought air was free until I bought a bag of chips.
Unknown

Last night I dreamed I ate a ten-pound marshmallow, and when I woke up the pillow was gone.
Tommy Cooper

I cook with wine, sometimes I even add it to the food.
W. C. Fields

Good health is merely the slowest possible rate at which one can die.
David Rosam

You can learn many things from children. How much patience you have, for instance.
Franklin P. Jones

I was asked to name all the presidents. I thought they already had names.
Demitri Martin

You know, somebody actually complimented me on my driving today. They left a little note on the windscreen; it said ‘Parking Fine’.
Tommy Cooper 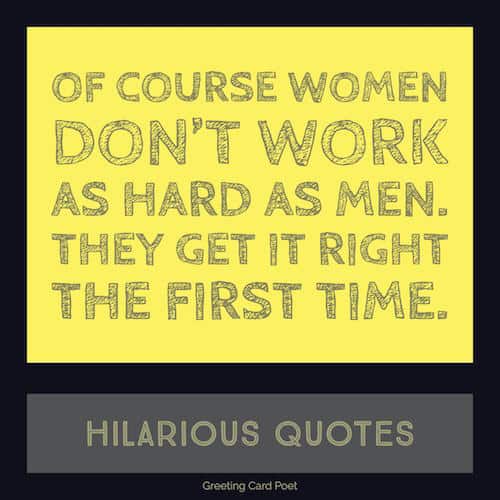 Never, under any circumstances, take a sleeping pill and a laxative on the same night.
Dave Barry

An apple a day keeps anyone away if you throw it hard enough.
Stephen Colbert

Beer is the reason I get out of bed every afternoon.
Unknown

I’m an idealist. I don’t know where I’m going, but I’m on my way.
Carl Sandburg

If you think women are the weaker sex, try pulling the blanket back to your side.
Stuart Turner

The public will believe anything, so long as it is not founded on truth.
Dame Edith Sitwell

I intend to live forever. So far, so good.
Steven Wright

Some people just need a high-five in the face with a chair.
Unknown

I’m so poor I can’t even pay attention.
Ron Kittle

I haven’t spoken to my wife in years. I didn’t want to interrupt her.
Rodney Dangerfield

Always forgive your enemies; nothing annoys them as much.
Oscar Wilde

The truth will set you free, but first, it will piss you off.
Joe Klaas

Life is short. Smile while you still have teeth.
Mallory Hopkins

There’s an old saying about those who forget history. I don’t remember it, but it’s good.
Stephen Colbert

First, the doctor told me the good news: I was going to have a disease named after me.
Steve Martin

Action speaks louder than words but not nearly as often.
Mark Twain

I’ve had bad luck with both my wives. The first one left me, and the second one didn’t.
James Holt McGavra

I used to do drugs. I still do, but I used to, too.
Mitch Hedberg

Note: If you have suggestions for some funny quotes, please let us know via the Contact page. Thanks. 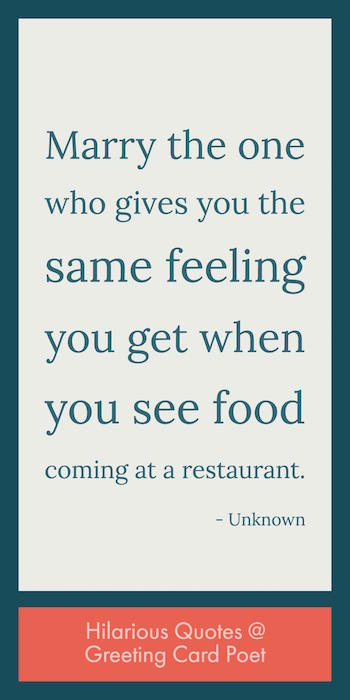 Quote of the Day to Make you Laugh

A bank is a place where they lend you an umbrella in fair weather and ask for it back when it begins to rain.
Robert Frost

The best way to remember your wife’s birthday is to forget it once.
H.V. Prochnow

I want to hang a map of the world in my house, and then I’m gonna put pins into all the locations that I’ve traveled to. But first I’m gonna have to travel to the top two corners of the map, so it won’t fall down.
Mitch Hedberg

True friends don’t judge each other. They judge people together.
Unknown

Marry the one who gives you the same feeling you get when you see food coming at a restaurant.
Unknown

I believe in the discipline of silence and could talk for hours about it.
George Bernard Shaw

Women spend their whole life to find the right man just to tell him every day that he is wrong.
Unknown

Honolulu – it’s got everything. Sand for the children, sun for the wife, sharks for the wife’s mother.
Ken Dodd

Part of the $10 million I spent on gambling, part on booze and part on women. The rest I spent foolishly.
George Raft

Some cause happiness wherever they go; others whenever they go.
Oscar Wilde

Scientists say the universe is made up of protons, electrons, and neutrons. They forget to mention morons.
Unknown

I am free of all prejudices. I hate everyone equally.
W.C. Fields

I used to jog but the ice cubes kept falling out of my glass.
David Lee Roth

Our family is just one tent away from a full-blown circus.
Unknown

The early bird gets the worm, but the second mouse gets the cheese.
Jon Hammond

I never forget a face, but in your case, I’ll be glad to make an exception.
Groucho Marx

I asked God for a bike, but I know God doesn’t work that way. So I stole a bike and asked for forgiveness.
Emo Philips

Wouldn’t exercise be more fun if calories screamed while you burned them?
Bill Murray

Just because I give you advice, it doesn’t mean I know more than you, it just means I’ve done more stupid shit.
Unknown

I have Alzheimer’s bulimia – first I eat everything in sight and then I forget to puke.
Cindy from Marzahn

I live in a neighborhood so bad that you can get shot while getting shot.
Chris Rock

My husband and I divorced over religious differences. He thought he was God, and I didn’t.
Unknown

I was so drunk, I thought a tube of toothpaste was astronaut food.
Will Ferell

Three rings of marriage are the engagement ring, the wedding ring, and the suffering.
Unknown

I bet giraffes don’t even know what farts smell like.
Bill Murray

Marriage, the proof of the existence of cosmic humor!
Unknown

My level of maturity depends on who I’m with.
Unknown

Are you Google? Because you have everything I’m searching for.
Unknown

You can’t make everybody happy. You aren’t a jar of Nutella.
Unknown

You don’t know what you have until it’s gone. For example, toilet paper.
Unknown

Why do they call it rush hour when nothing moves?
Robin Williams

Procrastination is the art of keeping up with yesterday.
Don Marquis

You are going to be fine, you come from a strong line of lunatics.
Unknown

When they asked George Washington for his ID, he just took out a quarter.
Stephen Wright.

Mike, an author, and editor of Greeting Card Poet believes that laughter is the best medicine.

You’re on Hilarious Quotes to Tickle Your Funny Bone.