Funny birthday quotes for cards, letters, notes, Facebook posts, emails, texts and more. Choose a favorite quotation and combine it with a birthday wish for a winning combination.

See menu at bottom of page for more birthday-related pages. And, now, the best of the funny birthday quotes.

Middle age occurs when you are too young to take up golf and too old to rush up to the net.
Franklin Pierce Adams

Inside every older person is a younger person – wondering what the hell happened.
Cora Harvey Armstrong

Of late I appear to have reached that stage when people who look old
who are only my age.
Richard Armour

Time is a dressmaker specializing in alterations.
Faith Baldwin

The secret of staying young is to live honestly, eat slowly, and lie about your age.
Lucille Ball

To me, old age is always 15 years older than I am.
Bernard Baruch

The best way to remember your wife’s birthday is to forget it once.
E. Joseph Cossman

The really frightening thing about middle age is that you know you’ll grow out of it.
Doris Day

One compensation of old age is that it excuses you from picnics.
William Feather

Middle age is when you still believe you’ll feel better in the morning.
Bob Hope

Middle age is when you’ve met so many people that every new person you meet reminds you of someone else.
Ogden Nash

How old would you be if you didn’t know how old you are?
Satchel Paige

We are so fond of one another, because our ailments are the same.
Jonathon Swift

You’ve heard of the three ages of man – youth, age, and “you are looking wonderful.”
Francis Cardinal Spellman

When I was young, the Dead Sea was still alive.
George Burns 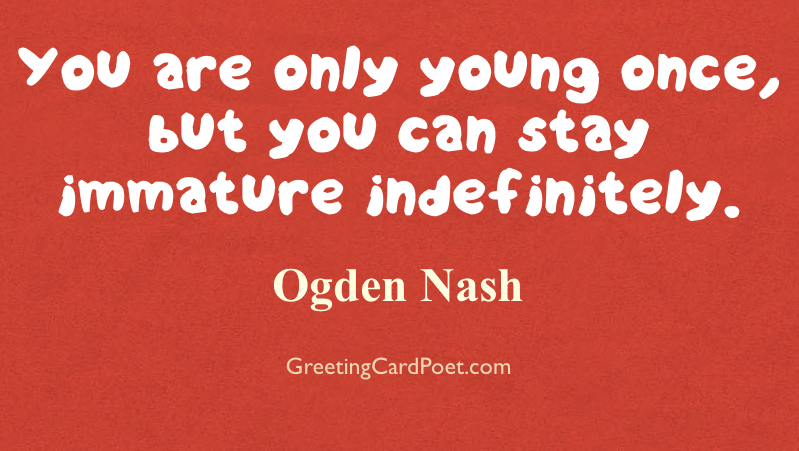 Thirty five is a very attractive age; London society is full of women who have of their own free choice remained thirty-five for years.
Maurice Chevalier

They tell you that you’ll lose your mind when you grow older. What they don’t tell you is that you won’t miss it very much.
Malcolm Cowley

Middle Age: When you begin to exchange your emotions for symptoms.
Georges Clemenceau

The years between fifty and seventy are the hardest. You are always being asked to do things, and yet you are not decrepit enough to turn them down.
T.S. Eliot

Age does not diminish the extreme disappointment of having a scoop of ice cream fall from the cone.
Jim Fiebig

You are only young once, but you can stay immature indefinitely.
Ogden Nash

If you survive long enough, you’re revered — rather like an old building.
Katherine Hepburn

You know you are getting old when the candles cost more than the cake.
Bob Hope

Just remember, once you’re over the hill you begin to pick up speed.
Charles Schultz

The first hundred years are the hardest.
Wilson Mizner

Call this an unfair generalization if you must, but old people are no good at everything.
Moe (The Simpsons)

If you’re yearning for the good old days, just turn off the air conditioning.
Griff Niblack

I was brought up to respect my elders; and now I don’t have to respect anyone.
George Burns

Middle age is when your age starts to show around your middle.
Bob Hope

A man is only as old as the woman he feels.
Groucho Marx

Growing old is like being increasingly penalized for a crime you have not committed.
Anthony Powell

Every man over forty is a scoundrel.
George Bernard Shaw

Birthdays are good for you. The more you have, the longer you live.
Unknown

Middle age is when a man is warned to slow down by a doctor instead of a policeman.
Unknown

Today is the yesterday you worried about tomorrow.
Unknown

Middle age is when you have the choice of two temptations; and you choose the one that will get you home earlier.
Unknown

Be kind to your kids, they’ll be choosing your nursing home.
Unknown

If things get better with age, then you’re approaching outstanding.
Unknown

The high cost of living hasn’t affected its popularity.
Unknown

You have the wisdom of the ages, but it doesn’t show.
Unknown

Wrinkles are the service stripes of life
Unknown

Pull out a gray hair and seven will come to its funeral.
Dutch Proverb

Old age isn’t so bad when you consider the alternative.
Unknown

A man is getting old when he walks around a puddle instead of through it.
Unknown

Life is one big canvas, throw all the paint you can at it.
Danny Kaye

Growing old is like being increasingly penalized for a crime you didn’t commit.
Anthony Powell

The older you get, the faster you ran as a kid.
Steve Owen

Never let yesterday use up too much of today.
Will Rogers

I’m in pretty good shape for the shape I’m in.
Mickey Rourke

Middle age is when your classmates are so gray and wrinkled and bald they don’t recognize you.
Oscar Wilde

I intend to live forever — so far, so good!
Stephen Wright

Looking for a fun way to say “Happy Birthday”? Try it with these customizable Birthday Certificates.

8 – Thank you for Wishes