You are here: Home / Funny Quotes and Sayings

There is a reason why people love to hear funny quotes and sayings from comedians. It is a great way to get an escape from their mundane lives. However, funny sayings can do much more than just take you into a world of fantasy. Most of these quotes and phrases come from real-world experiences. And many carry messages of wisdom in them.

Whether you want to bring a smile on someone’s face or want to give a deeper message, these funny quotes and sayings from famous men and women are the perfect way to go with. Share or read these funny quotes yourself to have a great time.

If you’re in a hurry, we picked our top dozen to kick things off.

1.) I find that a duck’s opinion of me is very much influenced over whether or not I have bread.
Mitch Hedberg

2.) It’s a small world, but I wouldn’t want to paint it.
Steve Wright

3.) I was feeling a bit down, I went to a therapist a few times, at a hundred bucks a pop. But then I realized that no therapy session would ever cheer me up half as much as if I was just strolling along and found a hundred dollar bill.
Emo Philips

4.) They say the recipe for Sprite is lemon and lime, but I tried to make it at home. There’s more to it than that.
Mitch Hedberg

5.) I’ve been getting into astronomy so I installed a skylight. The people who live above me are furious.
Steve Wright
6.) I wanted to buy a candle holder, but the store didn’t have one. So I got a cake.
Mitch Hedberg

7.) How many people have telekinetic powers? Raise my hand.
Emo Philips

8.) When we were driving over the border back into the United States, they asked me if I had any firearms. I said what do you need?
Steve Wright

11.) My wife and I were happy for 20 years. Then we met.
Rodney Dangerfield

12.) Give me golf clubs, fresh air, and a beautiful partner, and you can keep the clubs and the fresh air.
Jack Benny 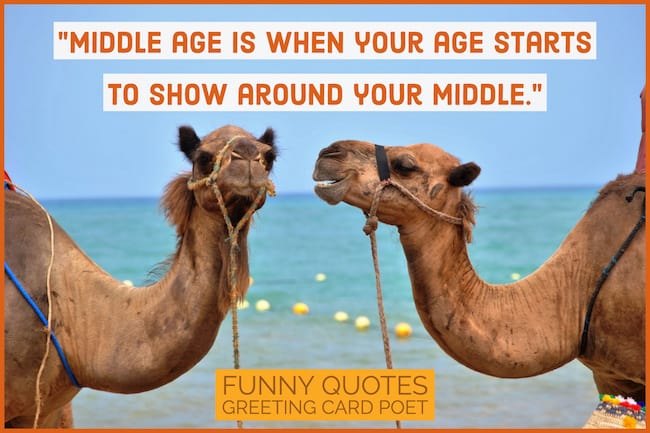 One of the great things about books is sometimes there are some fantastic pictures.
George W. Bush

If 13 is unlucky, then 12 and 14 are guilty by association.
Mitch Hedberg

Going to church doesn’t make you a Christian any more than going to a garage makes you an automobile.
Billy Sunday

The evening news is where they start by saying ‘good evening’ and proceed by telling you why it’s not.
Unknown

It’s important to have a good vocabulary. If I had known the difference between the words antidote and anecdote, one of my good friends would still be living.
John McDowell

If you want to look young and thin, hang around old, fat people.
Jim Eason
I could tell that my parents hated me. My bath toys were a toaster and a radio.
Rodney Dangerfield

Some people just have a way with words, and other people … oh … not have way.
Steve Martin

I worry whoever thought up the term ‘quality control’ thought if we didn’t control it, it would get out of hand.
Jane Wagner

I don’t want to brag, but I do speak pig Latin; I mean, I’m not fluent, but I’m sure if I ever went there, I could get by.
Bonnie McFarlane

Just because your doctor has a name for your condition doesn’t mean he knows what it is.
Franz Kafka

A Canadian psychologist is  selling a video that teaches you how to test your dog’s IQ. Here’s how it works: If you spend $12.99 for the video, your dog is smarter than you.
Jay Leno – See Jay on Facebook

The average woman would rather have beauty than brains because the average man can see better than he can think.
Unknown

We’ve begun to long for the pitter-patter of little feet, so we bought a dog. It’s cheaper, and you get more feet.
Rita Rudner

You have the right to remain silent. Anything you say will be misquoted, then used against you.
Unknown

Never argue with a doctor; he has inside information.
Bob Elliott and Ray Goulding

Middle age is when your age starts to show around your middle.
Bob Hope

I feel so miserable without you, it’s almost like having you here.
Stephan Bishop

I don’t suffer from insanity. I enjoy every minute of it.
Sherrilyn Kenyon

An apple a day keeps the doctor away, but an onion a day keeps everyone away.
Cassandra Chatfield

Never trust a man when he’s in love, drunk, or running for office.
Shirley Maclaine

Where there is a ‘will’, there are 500 relatives.
Unknown

A perfectly kept house is the sign of a misspent life.
Mary Randolph Carter

Hypochondria is the only disease I haven’t got.
Unknown 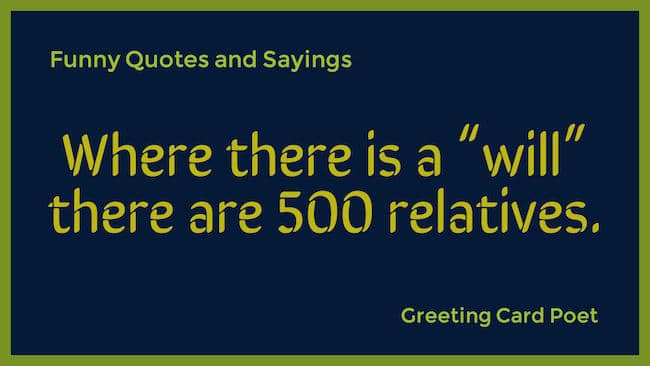 A deaf husband and a blind wife are always a happy couple.
John Florio

A teacher’s job is to take a room full of live wires and make sure they are well-grounded.
Unknown

Never board a commercial aircraft if the pilot is wearing a tank top.
Dave Barry

A diplomat is one who thinks twice before saying nothing.
Unknown

Being young is a fault that diminishes daily.
Swedish Proverb

I believe the only time the world beats a path to my door is when I’m in the bathroom.
Unknown

Before marriage, a man yearns for the woman he loves. After marriage, the ‘Y’ becomes silent.
Unknown 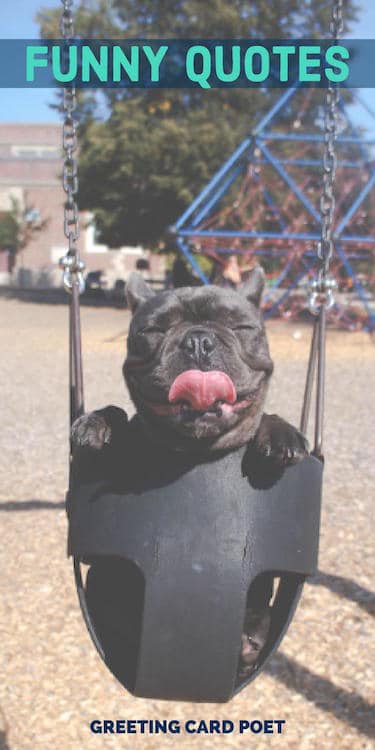 We need a 12-step group for compulsive talkers. They could call it On Anon Anon.
Paula Poundstone

Don’t tell me the sky’s the limit when there are footprints on the moon.
Paul Brandt

The key to eating healthy is  not eating any food that has a TV commercial.
Mike Birbiglia

It is better to swallow words than to have to eat them later.
Franklin Roosevelt

I don’t know that there are real ghosts and goblins, but there are always more trick-or-treaters than neighborhood kids.
Robert Brault

When you’re right, no one remembers. When you’re wrong, no one forgets.
Unknown

How come you never see a headline like ‘Psychic Wins Lottery’?
Jay Leno

I stopped fighting my inner demons, we’re on the same side now.
Darynda Jones

‘We live in an age when pizza gets to your home before the police.
Jeff Marder

A hotel minibar allows you to  see into the future and find out what a can of Pepsi will cost in 2020.
Rich Hall

I am a marvelous housekeeper. Every time I leave a man I keep his house.
Zsa Zsa Gabor

Sometimes I think war is God’s way of teaching us geography.
Paul Rodriguez

A clear conscience is usually the sign of a bad memory.
Unknown

You know it’s time to do the laundry when you dry off with a sneaker.
Zach Galifianakis

A husband is someone who takes out the trash and gives the impression he just cleaned the whole house.
Unknown

Funny Quote of the Day

The holiday season: a deeply religious  time that each of us  observes, in his own way, by going to the mall of his choice.
Dave Barry

I used to love the candy Nerds, but I stopped eating them when I realized that for me, it was basically cannibalism.
Rob O’Reilly

Blessed is he that expects nothing, for he shall never be disappointed.
Benjamin Franklin

I never let my schooling interfere with my education.
Mark Twain

If you can’t beat them, arrange to have them beaten.
George Carlin

Eat a live toad the first thing in the morning and nothing worse can happen to you for the rest of the day.
Unknown

I have left orders to be awakened at any time in case of a national emergency—even if I’m in a Cabinet meeting.
Ronald Reagan

I have never killed a man but I have read many obituaries with great pleasure.
Clarence Darrow

Being president is like  running a cemetery: You’ve got a lot of people under you, and nobody’s listening.
Bill Clinton

Instead of getting married again, I’m going to find a woman I don’t like and just give her a house.
Louis Grizzard

The road to success is always under construction.
Lily Tomlin

A balanced diet is a cookie in each hand.
Unknown

A day without laughter is a day wasted.
Charlie Chaplin

If I had no sense of humor, I would long ago have committed suicide.
Mahatma Gandhi

Everything is funny, as long as it’s happening to somebody else.
Will Rogers

Celebrate your successes. Find some humor in your failures.
Sam Walton

Smiling is definitely one of the best beauty remedies. If you have a good sense of humor and a good approach to life, that’s beautiful.
Rashida Jones

Kindness and a generous spirit go a long way. And a sense of humor. It’s like medicine – very healing.
Max Irons

From there to here, and here to there, funny things are everywhere.
Dr. Seuss

Laughter is the closest distance between two people.
Victor Borge

Comedy is simply a funny way of being serious.
Peter Ustinov

This collection of funny quotes was compiled by Mike, the founder, and editor of Greeting Card Poet. His comedic influences date back to Steve Martin, Johnny Carson, Rodney Dangerfield, and family dinner time conversations.

You’re on Funny Quotes and Sayings.