You are here: Home / Winnie the Pooh Quotes

Winnie the Pooh quotes are popular with folks of all ages.

A.A. Milne’s Winnie the Pooh character has long been a favorite with fans. Pooh Bear has been a part of the childhood of more than one generation. The character has evolved out children’s stories and has gone on to inspire many books explaining sophisticated philosophies. Many others have used the famous character to explain a wide range of philosophies in their works.

The Winnie the Pooh character has often been associated with love, care, friendship and the simple pleasures of life. His importance and relevance have continued to evolve over the decades. It wouldn’t be wrong to claim that he will continue to entertain and inspire millions in the future. Here are some innocent, beautiful, and funny Winnie the Pooh quotes for you. Some of these quotes can also hold deeper meanings and can get you thinking. Treasure the moment.

Don’t underestimate the value of doing nothing, of just going along, listening to all the things you can’t hear, and not bothering.

It is more fun to talk with someone who doesn’t use long, difficult words but rather short, easy words like What about lunch?

When carrying a jar of honey to give to a friend for his birthday, don’t stop and eat it along the way.

A day without a friend is like a pot without a single drop of honey left inside.

I wish Pooh were here. It’s so much more friendly with two. 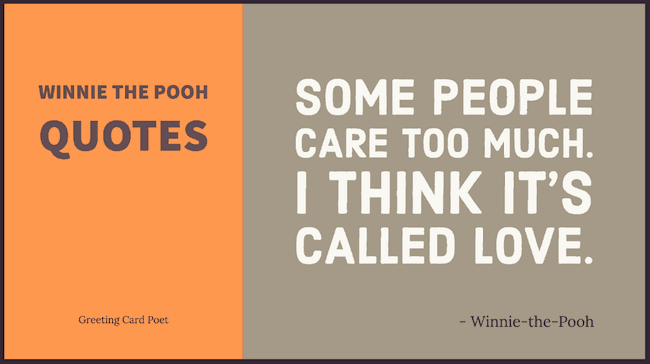 You can’t stay in your corner of the Forest waiting for others to come to you. You have to go to them sometimes.

Always watch where you are going. Otherwise, you may step on a piece of the Forest that was left out by mistake.

If ever there is tomorrow when we’re not together… there is something you must always remember. You are braver than you believe, stronger than you seem, and smarter than you think.

It’s always useful to know where a friend-and-relation is, whether you want him or whether you don’t.

I used to believe in forever . . . but forever was too good to be true.

Forever isn’t long at all, Christopher, as long as I’m with you. Winnie the Pooh

People say nothing is impossible, but I do nothing every day.

We will be friends until forever, just you wait and see.

Just because an animal is large, it doesn’t mean he doesn’t want kindness.

People who don’t Think probably don’t have Brains; rather, they have grey fluff that’s blown into their heads by mistake.

Rivers know this: there is no hurry. We shall get there someday.

Sometimes, if you stand on the bottom rail of a bridge and lean over to watch the river slipping slowly away beneath you, you will suddenly know everything there is to be known.

When you see someone putting on his big boots, you can be pretty sure that an adventure is going to happen.

Poetry and Hums aren’t things which you get, they’re things which get you. And all you can do is go where they can find you.

Because although eating honey was a very good thing to do, there was a moment just before you began to eat it which was better than when you were.

The hardest part is what to leave behind, … It’s time to let go!

It’s not much of a tail, but I’m sort of attached to it.

Think it over, think it under.

Some people care too much. I think it’s called love.

Love is taking a few steps backward maybe even more…to give way to the happiness of the person you love.

A little consideration, a little thought for others, makes all the difference.

If there ever comes a day when we can’t be together, keep me in your heart I’ll stay there forever

Love is taking a few steps backward maybe even more… to give way to the happiness of the person you love.

I think we dream so we don’t have to be apart so long. If we’re in each other’s dreams we can be together all the time.

How do you spell love? Pooh: You don’t spell it, you feel it.

But the most important thing is, even if we’re apart… I’ll always be with you.

Promise me you’ll never forget me because if I thought you would I’d never leave.

Sometimes the smallest things take up the most room in your heart.

Quotes by Winnie the Pooh

A bear, however hard he tries, grows tubby without exercise.

I am a Bear of Very Little Brain, and long words bother me.

Then would you read a Sustaining Book, such as would help and comfort a Wedged Bear in Great Tightness?

When late morning rolls around and you’re feeling a bit out of sorts, don’t worry; you’re probably just a little eleven o’clockish.

Mind over matter will make the Pooh unfatter.

You never can tell with bees.

When you go after honey with a balloon, the great thing is not to let the bees know you’re coming.

When looking at your two paws, as soon as you have decided which of them is the right one, then you can be sure the other one is the left.

Before beginning a hunt, it is wise to ask someone what you are looking for before you begin looking for it.

I ought to say, that it isn’t just an ordinary sort of boat. Sometimes it’s a Boat, and sometimes it’s more of an Accident. It all depends. On whether I’m on the top of it or underneath it.

The nicest thing about the rain is that it always stops. Eventually.

Weeds are flowers, too, once you get to know them.

How sweet to be a Cloud Floating in the Blue! It makes him very proud To be a little cloud.

…if Bears were Bees, They’d build their nests at the bottom of trees…

Let’s begin by taking a smallish nap or two

When having a smackerel of something with a friend, don’t eat so much that you get stuck in the doorway trying to get out. 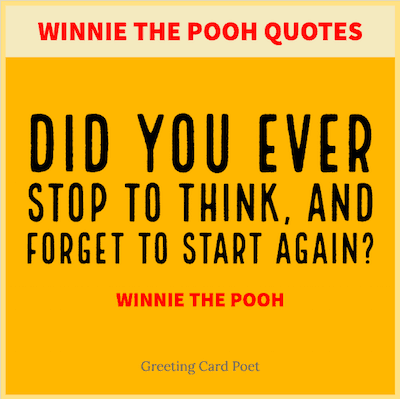 The story of my life.

Pooh Sayings That Will Make You You Think

They’re funny things, accidents. You never have them till you’re having them.

It is hard to be brave when you’re only a very small animal.

Nobody can be uncheered with a balloon.

Wherever they go, and whatever happens to them on the way, in that enchanted place on top of the forest, a little boy and his Bear will always be playing.

My spelling is Wobbly. It’s good spelling but it Wobbles, and the letters get in the wrong places.

And really, it wasn’t much good having anything exciting like floods, if you couldn’t share them with somebody.

She would know a good thing to do without thinking about it.

And I’d say to myself as I looked so lazily down at the sea: There’s nobody else in the world, and the world was made for me.

You can’t help respecting anybody who can spell TUESDAY, even if he doesn’t spell it right; but spelling isn’t everything. There are days when spelling Tuesday simply doesn’t count.

Whatever his weight in pounds and ounces, he always seems bigger because of his bounces.

But, after all, what are birthdays? Here to-day and gone to-morrow.

And if anyone knows anything about anything, it’s Owl who knows something about something.

Did you ever stop to think, and forget to start again?

One advantage of being disorderly is that one is constantly making exciting discoveries.

I’m not lost for I know where I am. But however, where I am may be lost.

I knew when I met you an adventure was going to happen.

I was walking along looking for somebody, and then suddenly I wasn’t anymore.

We can’t all, and some of us don’t. That’s all there is to it

Drinking your milk and talking at the same time may result in your having to be patted on the back and dried for quite a long time afterward.

Those who are clever, who have a brain, never understand anything.

Some people talk to animals. Not many listen though. That’s the problem.

Piglet noticed that even though he had a Very Small Heart, it could hold a rather large amount of Gratitude.

If you’d like to recommend some Winnie the Pooh quotes for our page, please drop us a line via the Contact page. Thanks!

How lucky I am to have something that makes saying goodbye so hard.

Liz is a poet, writer, and Winnie the Pooh reader who lives in Minneapolis.