You are here: Home / Winnie the Pooh Friendship Quotes

Winnie the Pooh Friendship Quotes provide a touching look at what it means to have a friend and be a friend.

Whenever the subject of friendship comes up, both kids and adults will remember the character of Winnie the Pooh. The famous character may have been introduced in the 1920s, he is still relevant and cherished worldwide. As Pooh fans know, the cornerstone of Winnie the Pooh’s story is his friendship with Piglet, Christopher Robin, and others who live in his forest.

A.A. Milne’s Winnie the Pooh introduced some of the most memorable words and moments that friends can cherish forever. Tens of millions of people grew watching Winnie the Pooh and his adventures with his friends and learned many lessons about friendship that they could carry along in their hearts, forever.

Here are some lovely Winnie the Pooh friendship quotes that you can share with your friends and loved ones or cherish in your heart. These quotes can also remind many of their childhood inspiration and lessons they may have forgotten!

How lucky am I to have something that makes sayings goodbye so hard!

I knew when I met you an adventure was going to happen!

Here together, friends forever. Some things were just meant to be, and that’s you and me.

We will be friends until forever, just you wait and see.

Promise me you’ll never forget me because if I thought you would I’d never leave.

A day without a friend is like a pot without a single drop of honey left inside.

We didn’t realize we were making memories. We just knew we were having fun. 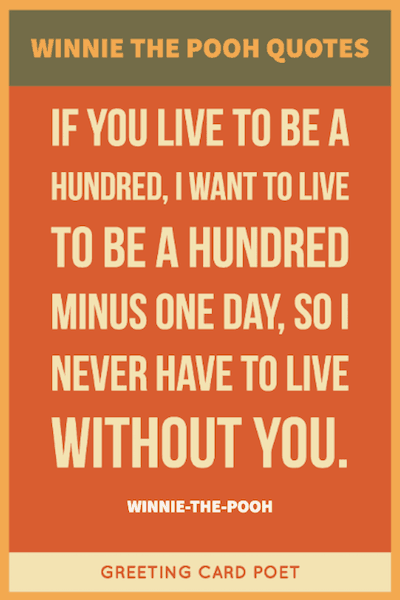 A friend is someone who helps you up when you’re down, and if they can’t, they lay down beside you and listen.

I think we dream so we don’t have to be apart for so long.
If we’re in each other’s dreams, we can be together all the time.

If there ever comes a day where we can’t be together, keep me in your heart.
I’ll stay there forever!

It’s not what we have, but who we have.

You can’t stay in your corner of the Forest waiting for others to come to you. You have to go to them sometimes.

It seemed they had always been, and would always be, friends. Time could change much, but not that.

“Christopher Milne had named his toy bear after Winnie, a Canadian black bear he often saw at London Zoo, and “Pooh”, a swan they had met while on holiday. The bear cub was purchased from a hunter for $20 by Canadian Lieutenant Harry Colebourn in White River, Ontario, Canada, while en route to England during the First World War.[5] He named the bear “Winnie” after his adopted hometown in Winnipeg, Manitoba.”

In life, it’s not where you go,
it’s who you travel with.

Nowhere is a wonderful place, especially when you’re beside your best friend.

A little consideration, a little thought for others, makes all the difference.

It is more fun to talk with someone who doesn’t use long, difficult words but rather short, easy words like, What about lunch?

It’s always useful to know where a friend-and-relation is, whether you want him or whether you don’t.

Once in a while someone amazing comes along… and here I am.

This…whatever it was…has now been joined by another…whatever-it-is… and they are now proceeding in company. Would you mind coming with me, Piglet, in case they turn out to be Hostile Animals?

Some people talk to animals. Not many listen though. That’s the problem.

Just because an animal is large, it doesn’t mean he doesn’t want kindness.

Tip: Use some select Winnie the Pooh Friendship Quotes as captions for photos of you and your favorite friends on their birthdays.

Wherever they go, and whatever happens to them on the way, in that enchanted place on the top of the forest, a little boy and his Bear will always be playing.

Piglet noticed that even though he had a very small heart, it could hold a rather large amount of gratitude.

If the person you are talking to doesn’t appear to be listening, be patient. It may simply be that he has a small piece of fluff in his ear.

I was walking along looking for somebody, and then suddenly I wasn’t anymore.

When having a smackerel of something with a friend, don’t eat so much that you get stuck in the doorway trying to get out.

I’ve found somebody just like me. I thought I was the only one of them.

As the two friends wandered through the snow on their way home, Piglet grinned to himself, thinking how lucky he was to have a best friend like pooh.

How do you spell love?
You don’t spell it, you feel it.

It’s so much more friendly with two.

Sometimes the smallest things take up the most room in your heart.

Love is taking a few steps backward maybe even more… to give way to the happiness of the person you love.

If there ever comes a day when we can’t be together keep me in your heart, I’ll stay there forever

Christopher Robin: Pooh, promise you won’t forget about me, ever. Not even when I’m a hundred.

Some people care too much. I think it’s called love.

This is a hug from me to you, to let you know I am thinking of you, and although I have nothing to say, you know I have thought of you today.

I love the kind of hugs where you can physically feel the sadness leaving your body.

Even if we’re apart, I’ll always be with you.

Piglet: What’s for breakfast?
Pooh: What do you say, Piglet?
Piglet: I say, I wonder what’s going to happen exciting today?
Pooh: It’s the same thing.

Piglet: Pooh!
Pooh: Yes, Piglet?
Piglet: Nothing, I just wanted to be sure of you.

Liz is a poet and writer who lives in Minneapolis.