You are here: Home / Tricky Riddles With Answers

These tricky riddles are a test for you and your friends. Answer more than one half correctly, and folks may put you in the genius class. Miss them all? Well, that’s another story.

No matter how you perform, you’re sure to learn a lot just exposing your mind to different curves and twists. Enjoy!

Which of the following is correct: 1) Ostrich can fly, or 2) Ostriches can fly?
Neither because ostriches can’t fly.

Mia gets in the shower, but surprisingly her hair is not wet when she gets out. How is this possible?
She didn’t turn the water on!

In a one-story pink house, there was a pink cat, a pink fish, a pink computer, a pink chair, a pink table, a pink telephone, a pink shower– everything was pink! What color were the stairs?
There weren’t any stairs, it was a one-story house!

If you paint a brown house white it will become a white house, if the stoplight changes from red to green then the light is green. So, if you throw a white shirt into the Red Sea, what will it become?
It will become wet. There would be no color change because the Red Sea is not actually red.

What do you get when you cross a vampire and teacher?
A blood test. 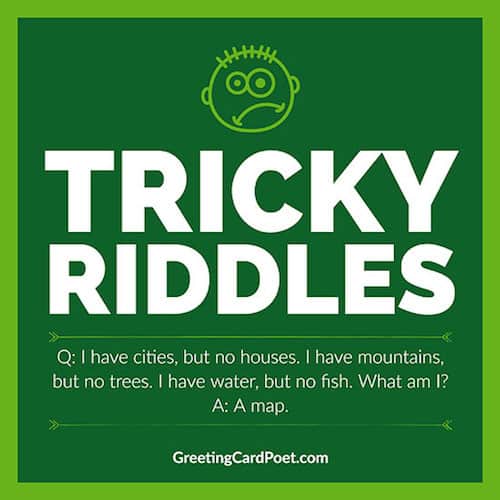 What question can you never honestly answer yes to?
“Are you asleep?”

What do pandas have that no other animal has?
Baby pandas.

What is the word that even in plain sight remains hidden?
Hidden.

First, you eat me, then you get eaten. What am I?
A fishhook.

How many letters are in the alphabet?
There are 11 letters in “the alphabet.”

Which word does not belong in the following list: Stop cop mop chop prop shop or crop?
The word ‘or’ is the only one that doesn’t end with ‘op.’

I have cities, but no houses. I have mountains, but no trees. And, I have water, but no fish. What am I?
A map.

How many sides does a circle have?
Two.

I come from a mine and get surrounded by wood always. Everyone uses me. What am I?
Pencil lead.

What word starts with the letter E ends with the letter E but only has one letter in it?
Envelope. (Okay, this is one of those classics, tricky riddles that nearly everyone has heard before. But, the reason for its longevity: it’s good!)

What are the next three letters in this combination? OTTFFSS
E N T (Each letter represents the first letter in the written numbers: One, Two, Three, Four, Five, etc.).

What is seen in the middle of March and April that can’t be seen at the beginning or end of either month?
The letter “R.”

If a military camp has 183 soldiers and a military rebel has one shot to get them all, what would the rebel do to make sure one shot got all 183?
He would ask all 183 to stand close so that they all fit in the photo.

I speak without a mouth and hear without ears. I have no body, but I come alive with the wind. What am I?
An echo.

A man is in his car. He sees three doors. A golden one, a diamond one and a silver one. Which door does he go through first?
His car door.

You measure my life in hours and I serve you by expiring. I’m quick when I’m thin and slow when I’m fat. The wind is my enemy.
A candle.

A doctor gives you three pills and tells you to take one every half an hour. How long will the pills last?
One hour.

How can the number four be half of five?
IV, the Roman numeral for four, which is “half” (two letters) of the word five. 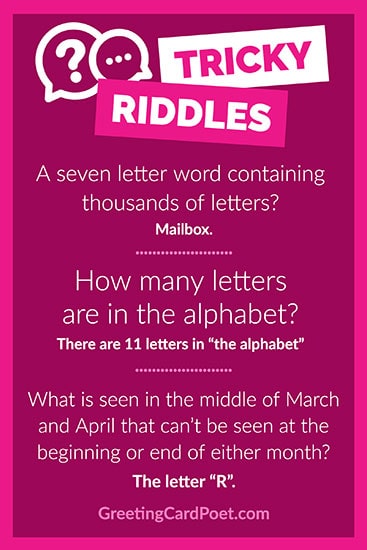 Friday, Pete and Jeff went to the store to buy some bread. The total of $12 was divided equally among the friends. Pete paid $4 and Jeff paid $4 as well. Who paid the other $4?
Their friend, Friday.

Have some tricky riddles that we missed? Please let us know via the Contact page.

The mad scientist wanted to take a person who had 5 heads and remove 4 of them and sew them onto a clown’s head. He estimated that it would take 43 minutes per head. How long would it take him to complete the entire procedure?
He can’t complete it because no person has 5 heads. 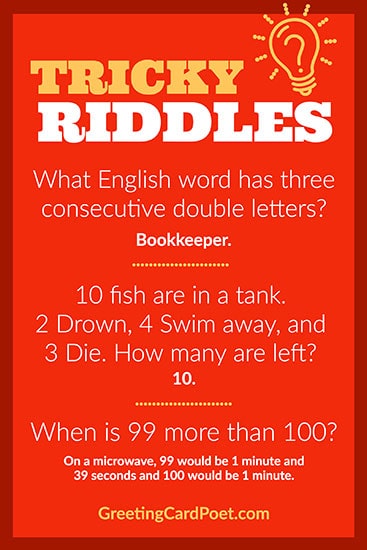 A woman shoots her husband, then holds him underwater for five minutes. Next, she hangs him. Right after, they enjoy a lovely dinner. Explain.
She took a picture of him and developed it in her darkroom.

A man is sitting in his cabin in Michigan. Three hours later he gets out of his cabin in Texas. How is this possible?
He is a pilot in the cabin of the airplane.

Three doctors said that Robert was their brother. Robert said he had no brothers. Who is lying?
Neither of them was lying. The doctors were his sisters.

Which of the following is not white? Egg whites, The White House, polar bears, golf balls, milk, marshmallows, and white onions.
Polar bears, because their fur is colorless. Each fur strand is actually transparent and pigment-free with a hollow core that reflects light.

Mike has co-authored 4 trivia books for kids and is the founder of Greeting Card Poet.

You’re on our Tricky Riddles page.