Sink your teeth into these Thanksgiving jokes this holiday season! Thanksgiving is an emotional time when people travel miles away from home just to be with loved ones they see only once a year.

Luckily, these jokes are good to use, no matter what time of year it is! Instead of eating yourself into a food coma, we have harvested a plateful of jokes that you can present to everyone to feast upon. Trust us, there’s more than enough to go around to get the whole family stuffed!

Let’s face it, turkeys are easy targets for hunters and this is also true for jokes. If you’re looking for some funny, clever jokes to share this holiday, overindulge and have big fun by adding some giggles at dinner during your next Thanksgiving day celebration with this heaping helping of jokes below. Enjoy and Happy Thanksgiving!

What do you call Thanksgiving for selfish people?
Thanks-taking.

What do comedians call Thanksgiving?
Pranks-giving. (Check out more Puns for Kids.)

What kind of cars would pilgrims drive today?
Plymouth.

Why did the scarecrow win the Nobel Prize?
Because he was outstanding in his field.

What kind of face do pilgrims make when they’re in pain?
Pil-grimace.

What’s the smallest unit of measurement in the pilgrim cookbook?
Pilgram.

How did Albert Einstein celebrate Thanksgiving?
He was very thinkful. 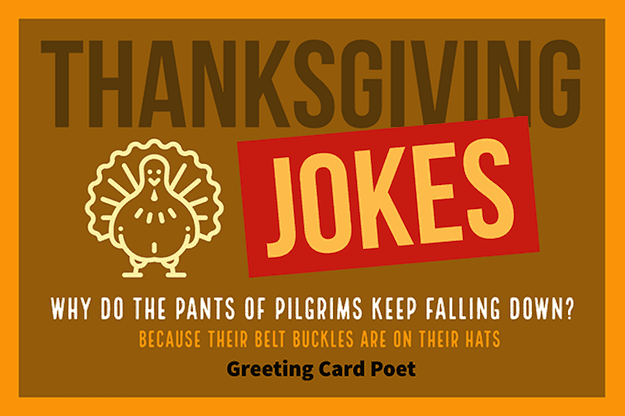 What did the turkey dress up as on Halloween?
A gobblin’

Why did the pilgrim’s pants keep falling down?
Because his belt buckle was on his hat.

What did the baby corn say to mama corn?
Where’s popcorn.

What do you get if you cross a pointy black hat and some leftover turkey?
A Witch-bone.

What did the hipster say the day after Thanksgiving?
I liked the leftovers before they were cool.

What happened to the Pilgrim who was shot at by an Indian?
He had an arrow escape.

What’s the best song to sing when preparing your Thanksgiving turkey?
All About The Baste.

What are unhappy cranberries called?
Blueberries. 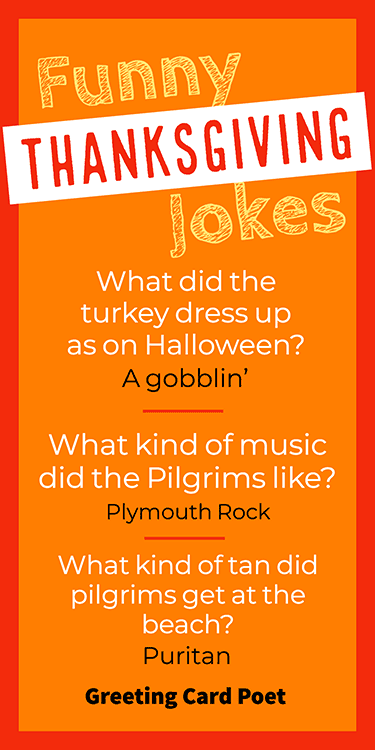 What do you call a running turkey?
Fast food.

What are the feathers on a turkey’s wings called?
Turkey feathers.

What’s the best dance to do on Thanksgiving?
The turkey trot.

What was the scarecrow’s favorite fruit?
Straw-berries.

How did you send a turkey through the mail?
Bird class.

What do you call the age of a pilgrim?
Pilgrimage.

What was the pumpkin’s favorite sport?
Squash.

Why didn’t the Pilgrims tell secrets in the cornfield?
Because the corn had ears.

What do pilgrims learn in school?
Pilgrammar.

Why was the Thanksgiving dinner so expensive?
It had 24 carrots.

What always comes at the end of Thanksgiving?
The letter G.

Why did the Pilgrim eat a candle?
He wanted a light snack.

What did the monster say to the Thanksgiving turkey?
Pleased to eat you.

What kind of music did the Pilgrims like?
Plymouth Rock.

Why do the pants of pilgrims keep falling down?
Because their belt buckles are on their hats.

What do vampires call Thanksgiving?
Fangs-giving.

What do you call a rude Turkey?
A jerk-key

Why didn’t the Pilgrim want to make the bread?
It’s a crummy job.

When did the Pilgrims first say, “God bless America”?
The first time they heard America sneeze.

What does Miley Cyrus eat for Thanksgiving?
Twerk-ey.

What did the mama turkey say to her naughty son?
If your papa could see you now, he’d turn over in his gravy.

If a man wants to eat a turkey on Thanksgiving, what does a turkey want?
It simply wants to run away.

What do you call an evil turkey?
Poultry-Geist.

What did the turkey say before it was roasted?
Boy, I’m stuffed.

What kind of tan did pilgrims get at the beach?
Puritan.

If the pilgrims came on the Mayflower than what does the teacher come on?
The scholarships.

If you call a large turkey a gobbler what do you call a small one?
Goblet.

What does a Pilgrim call his friends?
Pal-grims.

Why did the Pilgrim die in the car crash?
Because he didn’t buckle up.

Why was the cook late to Thanksgiving dinner?
He lost track of thyme.

Why did the handbag hitch a ride with the Pilgrims when they came to America?
To escape purse-cution.

Why did the turkey sit on the tomahawk?
To try to hatchet.

Where does turkey go to dance?
The Butterball.

What do turkeys like to do on sunny days?
Have peck-nics!

Why can’t you take a turkey to church?
They use fowl language.

What happened to the turkey who got into a fight?
He got the stuffing knocked out of him!

What do you call it when it rains turkeys?
Fowl weather!

What’s the most musical part of a turkey?
The drumstick.

Why do turkeys lay eggs?
Because if they dropped them, they would break.

Why shouldn’t you look at the turkey dressing?
Because it will make him blush.

What’s the key to a great Thanksgiving dinner?
The turKEY.

If fruit comes from a fruit tree, where does turkey come from?
A poul-tree.

What sound does a turkey’s phone make?
Wing, wing.

What do you get when a turkey lays an egg on a hill?
An eggroll.

What sound does a limping turkey make?
Wobble, wobble.

Who is not hungry at Thanksgiving?
The turkey because he’s already stuffed.

Liz is a writer and poet based in Minneapolis.