These powerful Martin Luther King Jr quotes may inspire you to be a better person or provide some courage for one of your causes. King was a civil rights crusader and is recognized all over the world as one of the biggest proponents of nonviolence. Throughout his life, he inspired millions of men and women to take up the cause of justice.

He may have lived for just 39 years, but his impact on the history of America and the world itself is one of the greatest. His contributions and messages of peace and love have played a major role in civil rights in the United States and across the world.

The third Monday of January is observed as Martin Luther King Jr. Day which is around his birthday on January 15. Ronald Reagan signed this recognition into law in 1983 and it was first observed in 1986. Dr. Martin Luther King Jr. was the chief spokesperson for nonviolent activism during the Civil Rights Movement in the U.S. King was assassinated on April 4, 1968.

There are valuable messages in his words for everyone, no matter where you live on this planet. Enjoy these MLK quotes and share them with your friends and colleagues.

Faith is taking the first step even when you don’t see the whole staircase.

Injustice anywhere is a threat to justice everywhere.

I look to a day when people will not be judged by the color of their skin, but by the content of their character.

We must accept finite disappointment but never lose infinite hope.

Love is the only force capable of transforming an enemy into a friend. 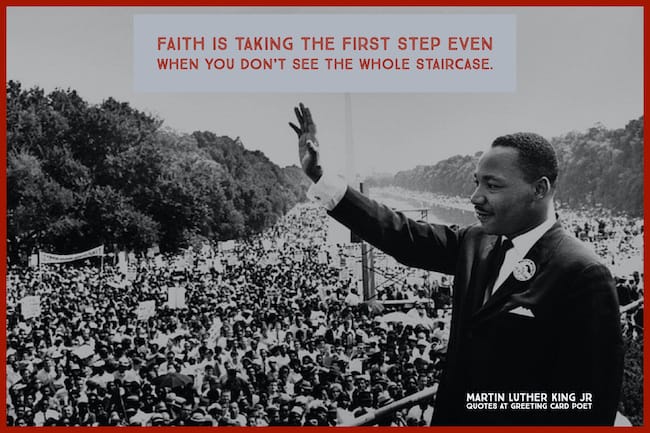 There comes a time when silence is betrayal.

If I cannot do great things, I can do small things in a great way.

Intelligence plus character — that is the goal of true education.

Nothing in all the world is more dangerous than sincere ignorance and conscientious stupidity.

True peace is not merely the absence of tension; it is the presence of justice.

Forgiveness is not an occasional act. It is a permanent attitude.

Our lives begin to end the day we become silent about things that matter.

Only in the darkness can you see the stars.

Hate cannot drive out hate: only love can do that quote 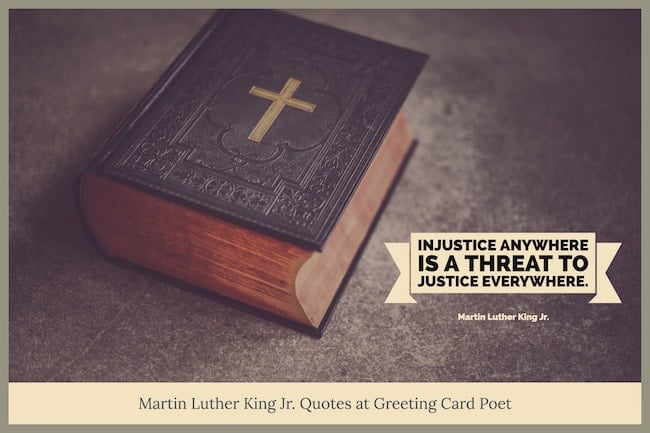 I have decided to stick with love. Hate is too great a burden to bear.

In the end, we will remember not the words of our enemies, but the silence of our friends.

No one really knows why they are alive until they know what they’d die for.

There can be no deep disappointment where there is not deep love.

Character is how you treat those who can do nothing for you.

Out of the mountain of despair, a stone of hope.

I believe that unarmed truth and unconditional love will have the final word in reality. This is why right, temporarily defeated, is stronger than evil triumphant.

With patient and firm determination, we will press on until every valley of despair is exalted to new peaks of hope. 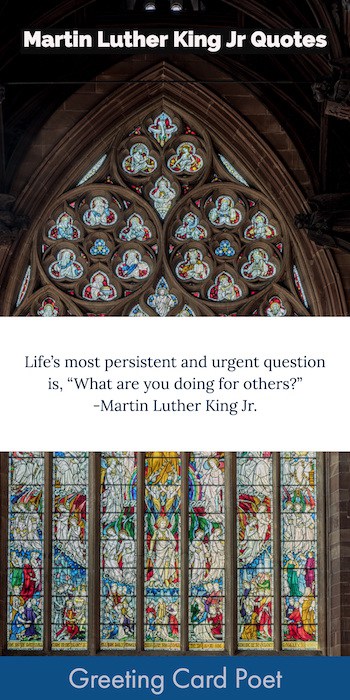 The time is always right to do the right thing.

Your ignorance is their power.

Life’s most persistent and urgent question is, ‘What are you doing for others?’ (Learn more about volunteering)

Let no man pull you so low as to hate him.

We must concentrate not merely on the negative expulsion of war, but on the positive affirmation of peace.

It does not matter how long you live, but how well you do it.

Nonviolence means avoiding not only external physical violence but also internal violence of spirit. You not only refuse to shoot a man, but you refuse to hate him.

For when people get caught up with that which is right and they are willing to sacrifice for it, there is no stopping point short of victory.

Never succumb to the temptation of bitterness.

There comes a time when one must take a position that is neither safe nor politic nor popular, but he must take it because his conscience tells him it is right. 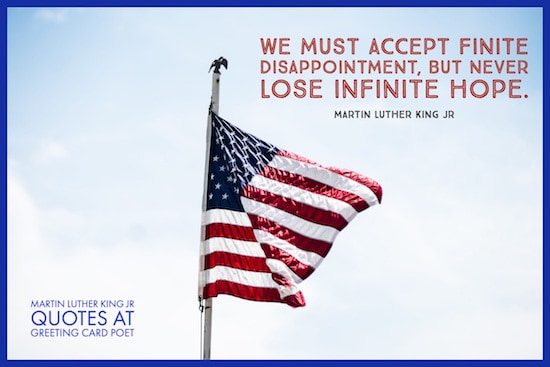 To be great, you have to be willing to be mocked, hated and misunderstood stay strong.

We may have all come on different ships, but we’re in the same boat now.

Our scientific power has outrun our spiritual power. We have guided missiles and misguided men.

One has a moral responsibility to disobey unjust laws.

When our days become dreary with low hovering clouds of despair, and when our nights become darker than a thousand midnights, let us remember that there is a creative force in this universe, working to pull down the gigantic mountains of evil, a power that is able to make a way out of no way and transform dark yesterdays into bright tomorrows.

Change does not roll in on the wheels of inevitability but comes through continuous struggle.

A genuine leader is not a searcher for consensus but a molder of consensus.

Oh, the worst of all tragedies is not to die young, but to live until seventy-five and yet not ever truly to have lived.

Courage is the power of the mind to overcome fear.

Don’t allow anybody to make you feel that you’re nobody.

If a man hasn’t discovered something he will die for, he isn’t fit to live.

Never, never be afraid to do what’s right, especially if the well-being of a person or animal is at stake. Society’s punishments are small compared to the wounds we inflict on our soul when we look the other way.

Those who are not looking for happiness are the most likely to find it because those who are searching forget that the surest way to be happy is to seek happiness for others.

Only through the bringing together of head and heart—intelligence and goodness—shall man rise to a fulfillment of his true nature.

We must build dikes of courage to hold back the flood of fear.

Nothing worthwhile is gained without sacrifice.

No person has the right to rain on your dreams.

We must come to see that the end we seek is a society at peace with itself, a society that can live with its conscience.

Every step toward the goal of justice requires sacrifice, suffering, and struggle; the tireless exertions and passionate concern of dedicated individuals.

Even if they try to kill you, you develop the inner conviction that there are some things so precious, some things so eternally true that they are worth dying for.

Every man must decide whether he will walk in the light of creative altruism or in the darkness of destructive selfishness.

I came to the conclusion that there is an existential moment in your life when you must decide to speak for yourself; nobody else can speak for you.

We must speak with all the humility that is appropriate to our limited vision, but we must speak.

Let us not seek to satisfy our thirst for freedom by drinking from the cup of bitterness and hatred.

If you lose hope, somehow you lose the vitality that keeps life moving, you lose that courage to be, that quality that helps you go on in spite of it all. And so today I still have a dream.

We must substitute courage for caution.

There is nothing more majestic than the determined courage of individuals willing to suffer and sacrifice for their freedom and dignity.

We will not be satisfied until justice rolls down like waters and righteousness like a mighty stream.

We cannot walk alone. And as we walk, we must make the pledge that we shall march ahead. We cannot turn back.

An individual has not started living until he can rise above the narrow confines of his individualistic concerns to the broader concerns of all humanity.

O’Halloran compiled this list of MLK Jr. quotes. He is the editor of Greeting Card Poet.

If you have a suggestion for a quote, please let us know on the contact page. Thanks.