You are here: Home / Father Daughter Quotes and Images

Father daughter quotes recognize those special relationships between dads and their daughters.

A father’s love for his daughter is boundless. It is not only about responsibility and constant worrying, but it can also be about fun and connection. A daughter can be a fabulous friend, confidant, and partner in all sorts of wonderful adventures. She is the one who really listens to his words when he talks.

Check out these heartwarming sayings on the bond between fathers and daughters. 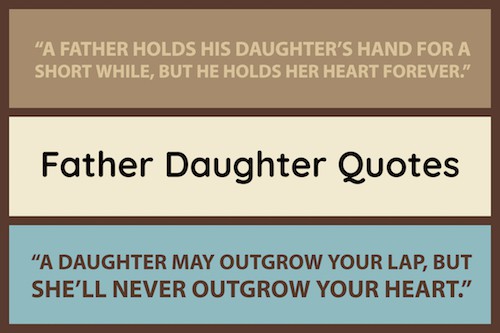 1.) A father holds his daughter’s hand for a short while, but he holds her heart forever.
Unknown 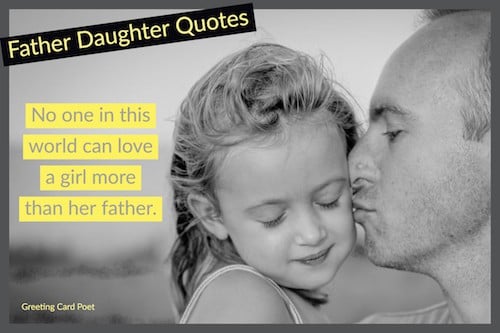 2.) No one in this world can love a girl more than her father.
Unknown 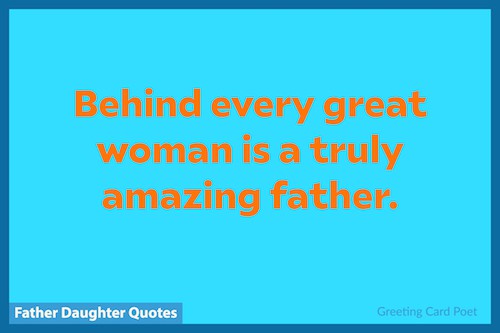 3.) Behind every great woman is a truly amazing father.
Unknown 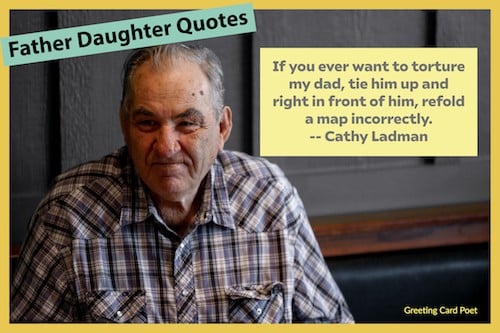 4.) If you ever want to torture my dad, tie him up and right in front of him, refold a map incorrectly.
Cathy Ladman 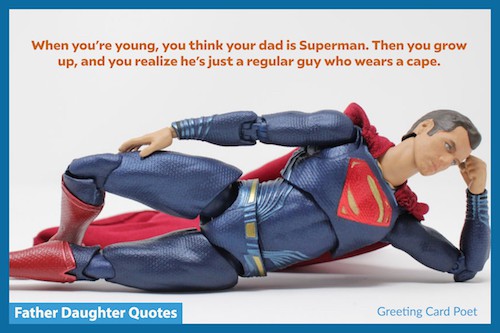 5.) When you’re young, you think your dad is Superman. Then you grow up, and you realize he’s just a regular guy who wears a cape.
Unknown 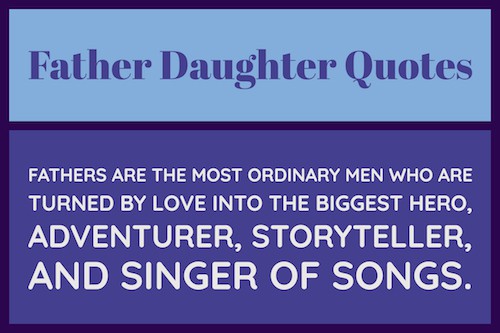 6.) Fathers are the most ordinary men who are turned by love into the biggest hero, adventurer, storyteller, and singer of songs.
Unknown 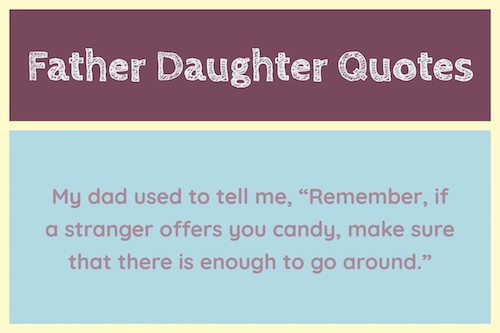 7.) My dad used to tell me, “Remember, if a stranger offers you candy, make sure that there is enough to go around.”
Unknown

8.) I don’t have a kid, but I think that I would be a good father, especially if my baby liked to go out drinking.
Eugene Mirman

9.) Dad, you’ve always been the coolest – like all those times you said ‘yes’ when Mom said ‘no.’
Unknown

10.) My father had a profound influence on me; he was a lunatic.
Spike Milligan

11.) I want my daughter to grow up to be a strong woman. I just want to be able to live with her in the meantime.
Unknown

12.) My kids are always accusing me of having a favorite child which is ridiculous because I don’t like any of them.
Unknown

13.) Fatherhood is great because you can ruin someone from scratch.
Jon Stewart

14.) I love my dad because even though he has Alzheimer’s, he remembers the important things. He can’t remember my name, but last week he told me exactly how much money I owe him.
Thyra Lees-Smith

Inspirational Quotes For Dads And Daughters 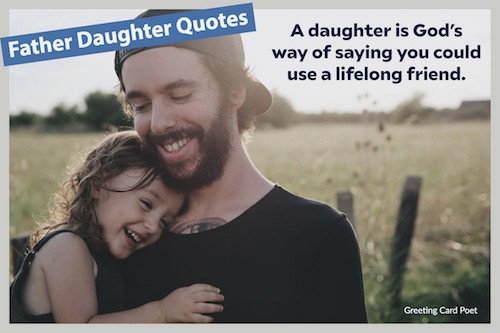 15.) A daughter is God’s way of saying you could use a lifelong friend.
Unknown

16.) A man’s daughter is his heart. Just with feet, walking out in the world.
Matt Johnson

18.) I’ve had a hard life, but my hardships are nothing against the hardships that my father went through in order to get me to where I started.
Bartrand Hubbard

19.) It was my father who taught me to value myself.
Dawn French 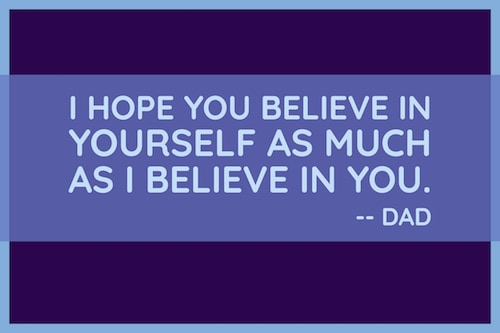 21.) In the darkest days, when I feel inadequate, unloved, and unworthy, I remember whose daughter I am, and I straighten my crown.
Unknown

22.) It was like we were exchanging codes on how to be a father and a daughter like we’d read about it in a manual, translated from another language, and we’re doing our best with what we could understand.
Aimee Bender

23.) He was a loving father, but he did his loving in private. Quietly, he would tell his daughter to drive safely. On her wedding day, when he walked her down the aisle, he’d whisper the words to her. But today, above the noise, he would have to shout it.
Debra Anastasia

24.) When fathers struggle with being authentic, they leave muddy footprints on little girls’ hearts.
Tina Samples

25.) And I’ve seen some incredible, beautiful things. Like the little girl who’s not very cute – her teeth are funny, and her hair doesn’t grow right, and she’s got on thick glasses – but her father holds her hand and walks with her like she’s a tiny angel that no one can touch. He gives her the best gift a woman can get in this world: protection. And the little girl learns to trust the man in her life. And all the things that the world expects from women – to be beautiful, to soothe the troubled spirit, heal the sick, care for the dying, send the greeting card, bake the cake – all of those things become the way we pay the father back for protecting us.
Adriana Trigiani

26.) Do you think it’s admirable to take your son fishing with you? Then you don’t know how wonderful it can be to take your daughter shopping.
John Sinor

27.) Fathers can seem powerful and overwhelming to their daughters. Let her see your soft side. Express your feelings and reactions. Tell her where you came from and how you got there. Let her see that you have had fears, failures, anxious times, hurts, just like hers, even though you may look flawless to her.
Stella Chess

28.) I am not ashamed to say that no man I ever met was my father’s equal, and I never loved any other man as much.
Hedy Lamarr

29.) Ordinary father-daughter love had a charge to it that generally was both permitted and indulged. There was just something so beautiful about the big father complementing the tiny girl. Bigness and tininess together at last—yet the bigness would never hurt the tininess! It respected it. In a world in which big always crushes tiny, you wanted to cry at the beauty of big being kind of and worshipful of and being humbled by tiny. You couldn’t help but think of your own father as you saw your little girl with hers.
Meg Wolitze 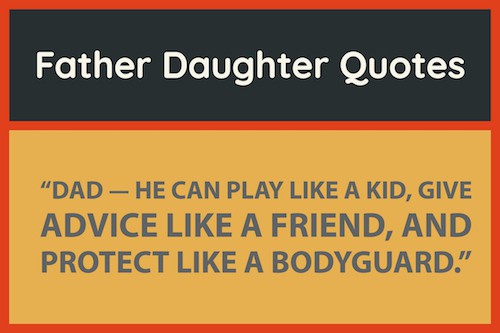 31.) Old as she was, she still missed her daddy sometimes.
Gloria Naylor

32.) Certain is it that there is no kind of affection so purely angelic as of a father to a daughter. In love to our wives, there is desire; to our sons, ambition; but to our daughters, there is something which there are no words to express.
Joseph Addison

33.) The reason why daughters love their dad the most is that there is at least one man in the world who will never hurt her.
Unknown

34.) My daughter is a treasure and a cause of sleeplessness.
Ben Sirach

35.) I took my daughter to the father-daughter dance, and I cried like a little baby. She’s 11 years old, so seeing her get dressed up and pretty made me cry.
Kevin Hart

36.) My son is my son till he have got him a wife, But my daughter’s my daughter all the days of her life.
Thomas Fuller

38.) My greatest accomplishment and my greatest pride and joy are my children. They truly are my greatest success.
Catherine Pulsifer

39.) What I wanted most for my daughter was that she be able to soar confidently in her own sky, wherever that might be, and if there were space for me as well, I would, indeed, have reaped what I had tried to sow.
Helen Claes

40.) They say that from the instant he lays eyes on her, a father adores his daughter. Whoever she grows up to be, she is always to him that little girl in pigtails. She makes him feel like Christmas. In exchange, he makes a secret promise not to see the awkwardness of her teenage years, the mistakes she makes, or the secrets she keeps.
Unknown

41.) A son is a son till he gets a wife; a daughter is a daughter for the rest of her life.
Irish Saying

42.) You fathers will understand. You have a little girl. She looks up to you. You’re her oracle. You’re her hero. And then the day comes when she gets her first permanent wave and goes to her first real party, and from that day on, you’re in a constant state of panic.
Stanley T. Banks

43.) A daughter is a bundle of firsts that excite and delight, giggles that come from deep inside and are always contagious, everything wonderful and precious, and your love for her knows no bounds.
Barbara Cage

44.) This relationship has something special about it that makes every father and every daughter in the world speak warmly about it.
Unknown

45.) The father of a daughter is nothing but a high-class hostage. A father turns a stony face to his sons, berates them, shakes his antlers, paws the ground, snorts, runs them off into the underbrush, but when his daughter puts her arm over his shoulder and says, “Daddy, I need to ask you something,” he is a part of butter in a hot frying pan.
Garrison Keillor

46.) When a father gives his daughter an emotional visa to strike out on her own, he is always with her. Such a daughter has her encouraging, understanding daddy in her head, cheering her on, not simply as a woman but as a whole, a unique human being with unlimited possibilities.
Victoria Secunda

47.) Fathers, be your daughter’s first love and she’ll never settle for anything less.
Unknown

48.) The greatest thing a father can do for his daughter is to love her mother.
Elaine S. Dalton

49.) My father gave me the greatest gift anyone could give another person, he believed in me.
Jimmy Valvano

52.) Any man can be a father, but it takes someone special to be a dad.
Unknown

53.) One of the greatest gifts I’ve ever gotten came from God I call him Daddy.
Unknown

55.) A good dad is able to smile when there is little to smile about.
Jake Slope

56.) Dad, your guiding hand on my shoulder will remain with me forever.
Unknown

57.) The power of a dad in a child’s life is unmatched.
Justin Ricklefs

58.) As a father you must have the mindset that being a dad is your most important job.
Mark Merrill

How To Use These Father Daughter Quotes

Showing affection towards your father is something most daughters like to do. This collection of quotations might give you some ideas of a saying to include on a card, note, or social media post. You might also include a photograph of the two of you together for more impact.

If you are the father, you might want to simply show your daughter how much you love her or what a close bond you two have or could have.

No, matter the occasion, you can always count on the beautiful quotes above to effectively convey your message to your father or your daughter.

Mike is the founder of Greeting Card Poet and the father of four daughters.