You are here: Home / 55 Good Success Quotes to Inspire

Our 55 Good Success Quotes come from a variety of sources. From Bruce Lee to Mark Twain, there’s something for everyone. Hard work, a stick-to-it nature, and having faith in yourself are a few of the common ingredients.

Success Quotes and Sayings for Inspiration

Success means different things to different people. The most important step to achieving success in your life is to know what it means to you in your personal or professional life. It can mean becoming wealthy, achieving something tangible in life, earning a title or discovering something in your field of specialization or anything else. One of the best ways to define success is to make this world a better place and lead a happy life. There could be as many definitions of success as there are human beings on this planet.

Here are some great quotations and sayings associated with success that will give you a better perspective into what success is and how you can become more successful in your life.

The only thing that stands between you and your dream is the will to try and the belief that it is actually possible.
Joel Brown

Always be yourself, express yourself, have faith in yourself, do not go out and look for a successful personality and duplicate it.
Bruce Lee

Success is nothing more than a few simple disciplines, practiced every day.
Jim Rohn

A successful man is one who can lay a firm foundation with the bricks others have thrown at him.
David Brinkley

The successful man is the one who finds out what is the matter with his business before his competitors do.
Roy L. Smith

You may only succeed if you desire succeeding; you may only fail if you do not mind failing.
Philippos

I find that the harder I work, the more luck I seem to have.
Thomas Jefferson

Success means doing the best we can with what we have. Success is the doing, not the getting; in the trying, not the triumph. Success is a personal standard, reaching for the highest that is in us, becoming all that we can be.
Zig Ziglar

The whole secret of a successful life is to find out what is one’s destiny to do and then do it.
Henry Ford

Success is not the key to happiness. Happiness is the key to success. If you love what you are doing, you will be successful.
Herman Cain

Check out our being thankful quotes. 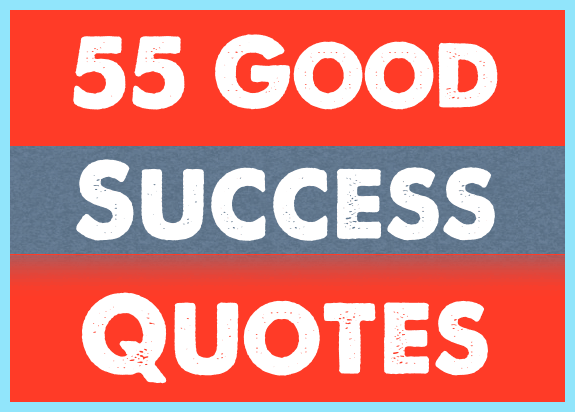 What makes a successful person?

The only way to do great work is to love what you do. If you haven’t found it yet, keep looking. Don’t settle.
Steve Jobs

Success is not final, failure is not fatal: it is the courage to continue that counts.
Winston Churchill

In the end, it’s not going to matter how many breaths you took, but how many moments took your breath away.
Shing Xiong

Twenty years from now you will be more disappointed by the things that you didn’t do than by the ones you did do. So throw off the bowlines. Catch the trade winds in your sails. Explore. Dream. Discover.
Mark Twain

A journey of a thousand miles begins with a single step.
Lao Tzu

All of our dreams can come true if we just have the courage to pursue them.
Walt Disney

The price of success is hard work, dedication to the job at hand, and the determination that whether we win or lose, we have applied the best of ourselves to the task at hand.
Vince Lombardi – for more of the Best Vince Lombardi quotes


Success is simple. Do what’s right, the right way, at the right time.
Arnold H. Glasow

However difficult life may seem, there is always something you can do and succeed at.
Stephen Hawking

Check out quotes on hard work.

Do not be embarrassed by your failures, learn from them and start again.
Richard Branson

Success is how high you bounce when you hit bottom.
George S. Patton

To succeed in life, you need two things: ignorance and confidence.
Mark Twain

Don’t aim for success if you want it; just do what you love and believe in, and it will come naturally.
David Frost

What the mind can conceive, it can achieve.
Napoleon Hill

Success is no second-hand thing. It is all right to give men the impulse, but the details they must work out themselves.
Edward Mott Woolley

Success consists of going from failure to failure without loss of enthusiasm.
Winston Churchill

I attribute my success to this: I never gave or took any excuse.
Florence Nightingale

A man is a success if he gets up in the morning and gets to bed at night, and in between, he does what he wants to do.
Bob Dylan

Action is the foundational key to all success.
Pablo Picasso

Success is a lousy teacher. It seduces smart people into thinking they can’t lose.
Bill Gates

Take up one idea. Make that one idea your life – think of it, dream of it, live on that idea. Let the brain, muscles, nerves, every part of your body, be full of that idea, and just leave every other idea alone. This is the way to success.
Swami Vivekananda

It is better to fail in originality than to succeed in imitation.
Herman Melville

The secret of success in life is for a man to be ready for his opportunity when it comes.
Benjamin Disraeli

Amateurs sit and wait for inspiration, the rest of us just get up and go to work.
Stephen King

We never know, believe me, when we have succeeded best.
Miguel de Unamuno

Those who have succeeded at anything and don’t mention luck are kidding themselves.
Larry King

Judge your success by what you had to give up in order to get it.
Author Unknown

You can succeed best and quickest by helping others to succeed.
Napoleon Hill

The distance between insanity and genius is measured only by success.
Bruce Feirstein

Success is more permanent when you achieve it without destroying your principles.
Walter Cronkite

So be sure when you step, Step with care and great tact. And remember that life’s A Great Balancing Act. And will you succeed? Yes! You will, indeed! (98 and ¾ percent guaranteed) Kid, you’ll move mountains.
Dr. Seuss

Pray that success will not come any faster than you are able to endure it.
Elbert Hubbard

If A is a success in life, then A equals x plus y plus z. Work is x; y is play, and z is keeping your mouth shut.
Albert Einstein

I’m a success today because I had a friend who believed in me and I didn’t have the heart to let him down.
Abraham Lincoln – More Great Abraham Lincoln quotes


When Love and determination work together expect a masterpiece.
Author Unknown

It had long since come to my attention that people of accomplishment rarely sat back and let things happen to them. They went out and happened to things.
Leonardo da Vinci

Anyone whose goal is ‘something higher’ must expect someday to suffer vertigo. What is vertigo? Fear of falling? No, Vertigo is something other than fear of falling. It is the voice of the emptiness below us which tempts and lures us, it is the desire to fall, against which, terrified, we defend ourselves.
Milan Kundera

Our greatest glory is not in never falling, but in rising every time we fall.
Oliver Goldsmith

When you stop chasing the wrong things you give the right things a chance to catch you.
Lolly Daskal

No one is going to hand me success. I must go out & get it myself. That’s why I’m here. To dominate. To conquer. Both the world and myself.
Unknown

Success is most often achieved by those who don’t know that failure is inevitable.
Coco Chanel

Failure is the condiment that gives success its flavor.
Truman Capote

It is hard to fail, but it is worse never to have tried to succeed.
Theodore Roosevelt

The elevator to success is out of order. You’ll have to use the stairs. One step at a time.
Author Unknown

Don’t be afraid to give up the good to go for the great.
John D. Rockefeller

Nothing in the world is more common than unsuccessful people with talent, leave the house before you find something worth staying in for.
Banksy

If at first you don’t succeed, try, try again. Then quit. No use being a damn fool about it.
W.C. Fields

Mike is an author, inventor, and editor of Greeting Card Poet.

Sayings about and for Nurses