You are here: Home / 37 Touching Goodbye Quotes and Sayings

Many folks think that goodbye quotes tend to be sad, and some are. But, some are more positive and speak to the good times enjoyed and the promise of meeting again.

Saying farewell can be quite tough to say, especially when it is someone close to you. Everyone faces these moments at different times in their lives. Sometimes you have to say goodbye to your friends and sometimes to your colleagues. Saying goodbye to your partner can be some of the most painful things in your life. Whenever hearts are involved, departures can be the hardest.

Your farewell marks the end of the glory days that our team has seen. Because you are the best boss there could ever have been. Goodbye.
Unknown

A memory lasts forever, never will it die….true friends stay together and they will never say goodbye.
Unknown

It may be hard to say good bye. But the good with it is a promise of something better.
Unknown 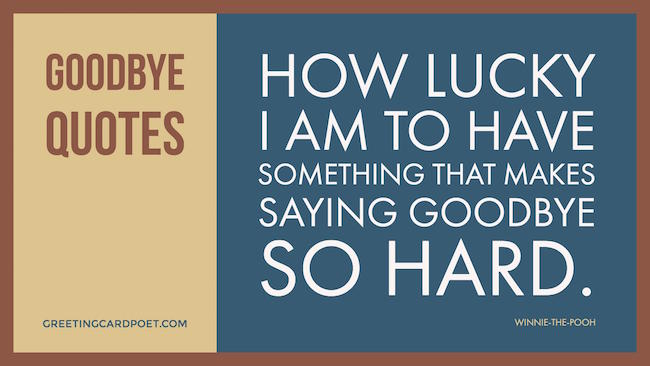 Memories may be beautiful and yet what’s too painful to remember we simply choose to forget. So it’s the laughter we’ll remember when we remember the way we were.
Unknown

I thought I was stronger than a word, but I just discovered that having to say goodbye to you is by far the hardest thing I’ve ever had to do.
Colleen Hoover

The story of life is quicker than the wink of an eye, the story of love is hello and goodbye…until we meet again.
Jimi Hendrix 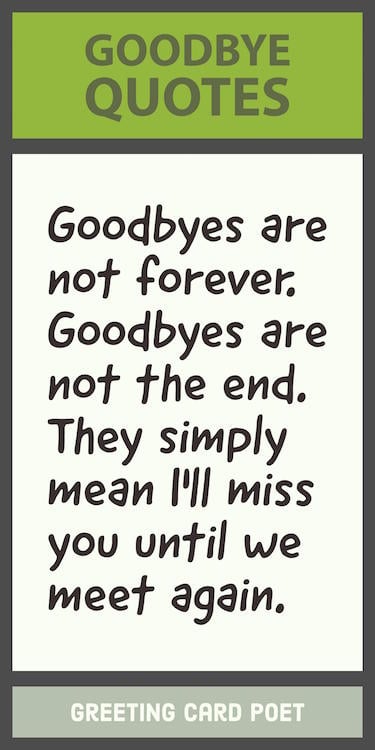 If you leave without saying farewell I will hunt you down, I will find you, and I will hug you.
Unknown

While we bid farewell to you, we feel pity for your new colleagues today. They have no idea the kind of wrath they have got coming their way. Goodbye boss.
Unknown

It’s time to say goodbye, but I think goodbyes are sad and I’d much rather say hello. Hello to a new adventure.
Ernie Harwell

You may have left for greener pastures but in doing so, you have made us go blue. Goodbye boss, we will miss you.
Unknown

Goodbye. It was a pleasure being your boss because you sent all my worries for a toss. As you leave I want to lay my heart bare, to tell you that employees like you are really rare. Goodbye.
Unknown

NEVER in my life have I EVER thought that I would want to work with a colleague FOREVER – until I started working with YOU. Goodbye, I will miss you.
Unknown

Instead Of Saying Farewell To You, I Wish I Could Say Fare-Bad So That You Come Back And Continue Working With Us. But I Won’t… Because I Always Wish The Best For You. Farewell.
Unknown

I want to hunt down the head hunter who hunted you and tell him that he has managed to hunt the best hunt ever. Adios my friend.
Unknown 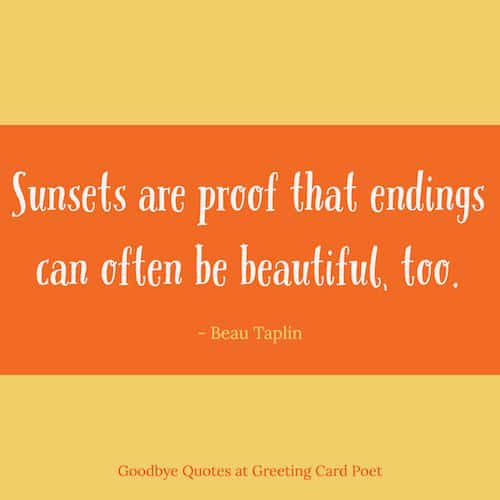 You have always been… more of a friend, less of a colleague, more of a leader, less of a boss. Farewell to a caring leader.
Unknown

As a colleague, you are a shield that protects us from the boss’ rants and a weapon that helps us in our war with monthly targets. So long.
Unknown

On the outside, I may be smiling while I wish you goodbye. But on the inside, I am desperately praying that you will quit your new job and come back soon.
Unknown

Having awesome colleagues is a bad habit, because it’ll be impossible to work with someone else now that you’re leaving. Goodbye.
Unknown

I Know That You Are Going To Get An Awesome Salary In Your New Job But There Is No Guarantee That You Will Get Awesome Colleagues Like Us Too. Do You Still Want To Go? Be well.
Unknown

The departure of a long and important work is always more sad than pleasing. Goodbye my friend.
Unknown 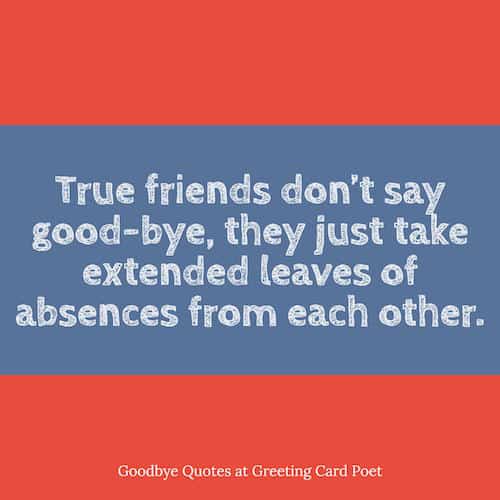 Nothing makes the earth seem so spacious as to have friends at a distance; they make the latitudes and longitudes.
Henry David Thoreau

We started here together and now we’re leaving the same way. The funny thing is you never appreciate what you had yesterday until it is gone today.
Unknown

Don’t be dismayed by good-byes. A farewell is necessary before you can meet again. And meeting again, after moments or lifetimes, is certain for those who are friends.
Richard Bach

Nothing,” said Piglet, taking Pooh’s hand. “I just wanted to be sure of you.” “How lucky I am to have something that makes saying goodbye so hard.
AA Milne

Saying goodbye doesn’t mean anything. It’s the time we spent together that matters, not how we left it.
Trey Parker

True friends don’t say good-bye, they just take extended leaves of absences from each other.
Unknown 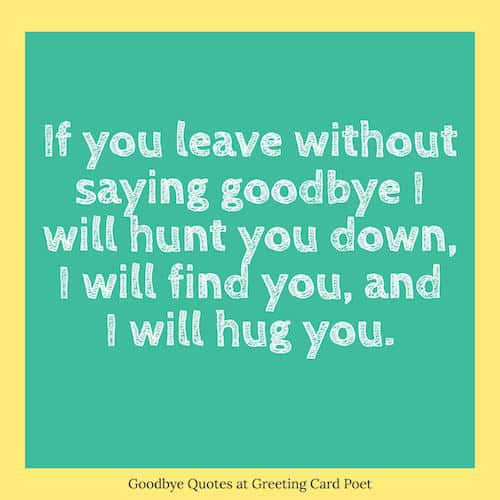 And the relationships that happen become so intense, deep, involved and complex and really hard to say goodbye to. The hardest part of the show is saying goodbye when it’s all done. It really breaks you.
Genevieve Gorder

When best friends say goodbye to each other, what they are really saying is ‘Hold that thought, I will be back soon’ So I will hold my thought until you return to hear the rest.
Unknown

A farewell is necessary before we can meet again, and meeting again after moments or a lifetime is certain for those who are friends.
Richard Bach

The world will come to an end, as I say goodbye to my Dear Lovely friend. But I know I’ll pull through this pain because We know we’ll surely meet again.
Unknown

Mike is an author, inventor, and editor of Greeting Card Poet.

Have some really good quotations you want to share? Let us know via the Contact page, please. Thanks.

‘I Miss You’ Quotations

The Best Really Missing Someone Sayings

Positive Expressions to Lift Your Spirits

You are so beautiful quotations