Look for some great Elf quotes to put you in the Christmas spirit? When you take a look at the best Christmas movies, there’s a handful that stands out. “It’s a Wonderful Life”, “Miracle on 34th Street”, “Home Alone”, and the story of a Christmas elf who goes to New York City to find his father and spread cheer, “Elf.”

Released in 2003, Elf was a critical and commercial success earning over $200 million at the box office. The title role of Buddy, expertly played by Will Ferrell, towers over his fellow elves with the help of some forced perspective camera work. Jim Carrey was the original choice for Buddy, but ultimately Ferrell was selected.

Buddy’s solo song at Gimbels was totally improvised by Ferrell. His slapstick comedy is sure to draw laughs even from the toughest viewers. Santa’s biggest helper made a big impression with audiences and continues to impress viewers today. These elf quotes will help you recall some of the funnier moments from this classic.

1.) Us elves like to stick to the four main food groups. Candy, candy canes, candy corns, and syrup.

2.) This place reminds me of Santa’s workshop. Except it smells like mushrooms and everyone looks like they want to hurt me.

6.) First, we’ll make snow angels for 2 hours, then we’ll go skating, then we’ll eat a roll of Tollhouse cookie dough as fast as we can, and then to finish, we’ll snuggle! 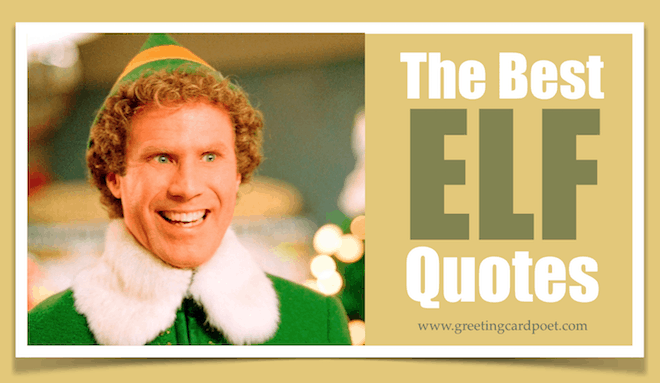 11 Things You Didn’t Know About Elf the Movie

11. My finger has a heartbeat.

12. That’s another thing… Buddy, you should know that your father… he’s on the naughty list.
Buddy: Nooooo!

15. Gimbels Manager: Hey! There’s no singin’ in the North Pole!
Buddy: Yes there is!
Gimbels Manager: No there’s not.
Buddy: We sing all the time! Especially when we make toys!

16. Have you seen these toilets? They’re GINORMOUS!

17. (Buddy burps loudly — NOTE: burp was actually done by another actor)
Did you hear that?

18. This place reminds me of Santa’s Workshop! Except it smells like mushrooms and everyone looks like they want to hurt me.

19. (On seeing a sign saying “World’s Best Cup of Coffee”)
You did it! Congratulations! World’s best cup of coffee! Great job, everybody! It’s great to be here.

21. It’s just nice to meet another human that shares my affinity for elf culture.

23. I think you’re really beautiful and I feel really warm when I’m around you and my tongue swells up.

Check out Christmas Jokes and Puns.

24. The best way to spread Christmas cheer is singing loud for all to hear!

25. I thought maybe we could make gingerbread houses, and eat cookie dough, and go ice skating, and maybe even hold hands.

27. I’m sorry I ruined your lives and crammed eleven cookies into the VCR.

28. Deb, you have such a pretty face, you should be on a Christmas card.

Note: Many of these elf quotes are so well known, they become part of our everyday language during the Christmas season. Don’t believe us? Pull out some maple syrup at the breakfast table in December.

Fun Facts about the movie Elf

You sit on a throne of lies.

So good news, I saw a dog today!

Watch out! The yellow ones don’t stop.

Liz is a poet and writer who lives in Minneapolis.

You’re on the Elf Quotes page.