We’ve collected 101 of the best trick questions to put your minds to work. Remember what makes these tricky is that the obvious answer is usually incorrect. There’s a hidden level of difficulty. You’re forced to think beyond your first solution.

However, the good news is that after taking on a few of these types of riddles, you begin to get the hang of it. Make it all the way through our list, and you’ll likely be prepared for just about any stumper.

If you’re looking for just one or two good brain teasers, our expert panel* has identified the top ten best ones just below. But, the more serious players will want to work their way down this whole page. Good luck – you just may need it!

1.) 12 blackbirds sat on the branches of a tree. A man shot 1 blackbird with his gun. How many were left on the tree?
None. The rest flew away.

4.) Before Mount Everest was discovered, which was the highest mountain in the world?
Mount Everest

5.) Imagine you are falling into a deep hole full of poisonous spiders and snakes. How would you survive?
Stop imagining.

7.) A boy kicks a soccer ball. It goes 10 feet and comes back to him. How is this possible?
He kicked in up in the air right above him. Gravity!

8.) A truck driver is going down a one-way street the wrong way and passes at least five policemen. Why is he not caught?
He’s walking on the sidewalk, not driving at the time.

9.) How can you lift an elephant with one hand?
Don’t worry about it, as you won’t find one.

10.) If you had only one match and entered a dark room containing an oil lamp, a newspaper, and some kindling wood, which would you light first?
The match. 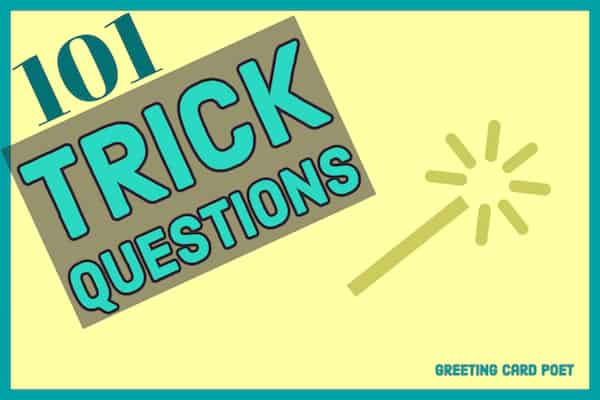 11.) What do you call a woman who knows where her husband is all the time?
A widow.

13.) If you threw a red stone into a green sea, what would it come back as?
Wet. (Don’t overthink this.)

14.) How do you make the number one disappear?
Add the letter “g” to the front and it’s gone.

15.) How many sides does a circle have?
Two. Inside and outside.

16.) What gets bigger and bigger the more you take away from it?
A hole

17.) Why is it against the law for a man living in North Carolina to be buried in South Carolina?
You shouldn’t bury a person who is alive.

18.) What two words in combination hold the most letters?
Post and Office.

19.) In Nova Scotia you cannot take a picture of a man with a wooden leg. Why not?
You’d need a camera of some kind.

21.) There was a terrible plane crash, every single person on board died, but yet two people survived. How is this possible?
The surviving couple was married.

23.) Which letter of the English alphabet flies, sings, and stings?
“B” 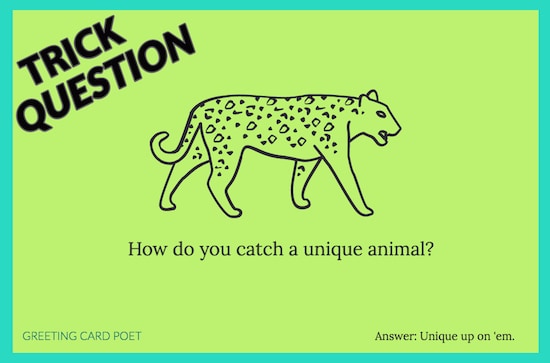 25.) What gets broken without being held?
A promise.

28.) Which word in the dictionary is nearly always spelled incorrectly?
Incorrectly.

29.) What do an island and the letter “t” have in common?
They are both in the middle of water.

30.) She has married many men but has never been married. Who is she?
The Minister.

32.) What’s the best way to drop an egg on a concrete floor without cracking it?
Just drop it. The egg will likely crack, but the floor won’t.

33.) A woman dressed in all black is walking down a city street. Suddenly, a large black car without any lights on comes round the corner and screeches to a sudden stop. How did the car know the woman was there?
It was daylight.

34.) Can you spell enemy in three letters?
FOE.

35.) I am an insect, and the first part of my name is the name of another insect. What am I?
A BEEtle.

36.) What wants to be answered but never has a question?
A doorbell. 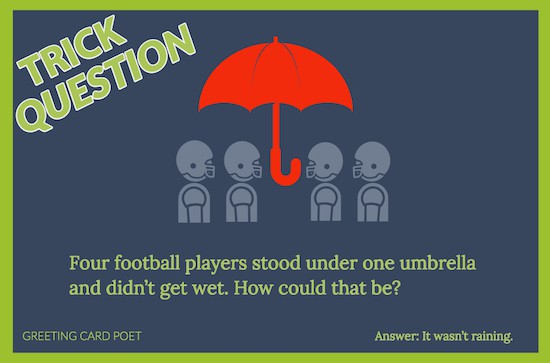 37.) Is the capital of Kentucky pronounced Louisville or Luee-ville?
Neither. The capital is Frankfurt.

40.) On which side of a chicken are there more feathers?
The outside.

42.) How can a man who shaves several times a day still sport a long beard?
He’s a barber.

46.) If Brenna had 4 piles of sand and Sara had 5 piles of sand, and they put them all together, how many piles would there be?
One big pile!

47.) The teacher asked the two girls who looked exactly like the following questions: a.) Are you from the same family? b.) Do you have the same parents? c.) Were you born on the same day? They answered truthfully “yes” to those questions, and yet told the truth when they indicated they were not twins. How can this be?
They were triplets.

48.) How long is the answer to this question?
How long. 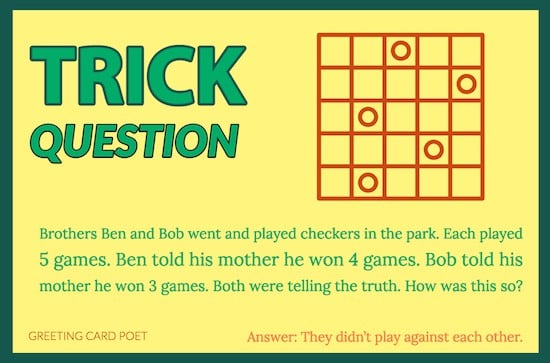 50.) What are the next three letters in this sequence: OTTFFSS?
ENT. One, two, three…It’s the first letter to every number counting up from one.

52.) What is full of holes, but still holds liquid?
A sponge.

53.) A man claimed to have special powers, by saying that he could predict the score of any baseball game before it began. And, he was right. How did he do it?
The score is 0 – 0 before the game begins.

54.) A woman pushes her car to a hotel and then proceeds to tell the owner that she is bankrupt. Why?
She’s playing the game of Monopoly.

59.) What is round and extremely violent?
A vicious circle.

60.) How do you know when a clock is hungry?
It goes back four seconds.

61.) What word is the longest in the English language?
Smiles, because there’s a mile between the start and finish. Check out the more straightforward answer to the longest word.

64.) Why do hippos wear red sneakers?
To hide in cherry trees.
Have you never seen a hippo in a cherry tree?
See how well it works?

65.) What did the person who invented the door-knocker win?
The No-bell prize.

66.) Which one is correct? “Penguins flies” or “A Penguin flies”?
Neither, a penguin doesn’t fly.

67.) Who is bigger, Mr. Bigger, Mrs. Bigger, or their baby?
Their baby is a little Bigger.

68.) How do you put an elephant in a refrigerator?
Open the door, put the elephant in, and close the door.

69.) How do you put a giraffe in a refrigerator?
Open the door, take the elephant out, lead the giraffe in, and close the door.

70.) The Lion King throws a party and invites every animal. All the animals attend except one. Which one?
The Giraffe. He’s still in the refrigerator.

71.) You receive an invite to the Lion King’s party. Five miles from Lion’s house, you have to cross a river noted for being full of crocodiles. How do you get across?
Swim across. Remember, all of the animals except the giraffe are at the party.

72.) A rope tied to a bull’s neck is 10 feet long and his food trough is 15 feet away. How did the bull eat successfully without breaking the rope or cutting it?
Walked over. The rope wasn’t tied to anything beyond the bull’s neck.

73.) Four football players stood under one umbrella and didn’t get wet. How could that be?
It wasn’t raining. 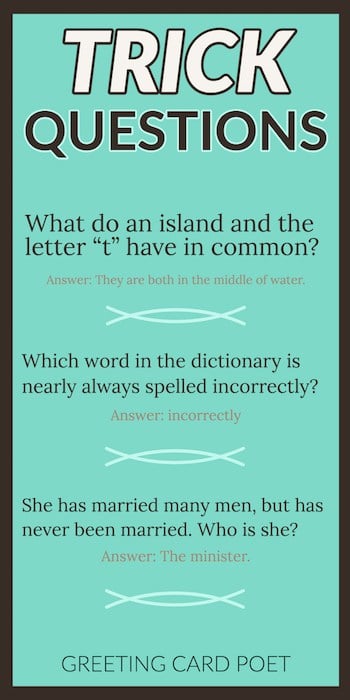 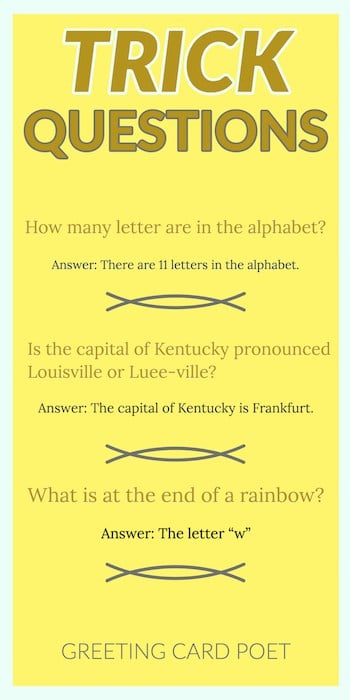 74.) How could Tom go outside into the pouring rain without a hat or any protection, and yet not have a hair on his head got wet?
Show the answer: Tom was bald.

75.) The cowboy rode his mule into town. Why?
He couldn’t carry it.

77.) A rooster laid an egg on top of the barn roof. Which way did it roll?
It didn’t roll as roosters don’t lay eggs. Hens do.

78.) What goes up and down but still remains in the same place?
Stairs.

80.) A plane crashes on the border of the U.S. and Canada. Where do they bury the survivors?
You don’t bury survivors…only the dead.

81.) Which president is on the U.S. $100 bill?
There isn’t one. Benjamin Franklin was never the president.

82.) How far can you walk into the woods?
Half-way. After that, you’re walking out of the woods.

84.) Tom’s father has five sons named: Ten, Twenty, Thirty, Forty and…guess what would be the name of the fifth?
Tom would be the fifth son.

85.) Two mothers and two daughters went out to eat, everyone ate one slice of pizza, yet only three slices were eaten. How’s that possible?
The group eating included a grandmother, her daughter, and her daughter’s daughter.

A grave error. (Should read “RIP”)

95.) Can you name a word that is pronounced differently when the first letter is capitalized?

Read between the lines.

A pic in kle

Most Famous Trick Question Ever

101.) The Greeks believed that the Sphinx of Egypt would devour all travelers who could not answer correctly the riddle it posed, “What is the creature that walks on four legs in the morning, two legs at noon, and three in the evening?” This is a great example of a What Am I Riddles

The Greek hero Oedipus came up with the winning answer, “Man.” This caused the Sphinx’s death.

So, the moral of the story is that if you know the answers to tricky riddles, you have a lot of power. Do you now want to go back and review the answers above one more time?

Our *expert panel:  Tim, a writer and toy inventor, and Mike, a writer, and editor of Greeting Card Poet, have always loved a good riddle, brain teaser, and trick question. Yet, even in putting this collection together, they were stumped more than a few times.

They wholeheartedly agreed to leave one of the best-known questions off the list, “Have you stopped beating your wife?”  But, then things got challenging. Through lots of giving and take, they arrived at the fine-tuned list above which they think are great for classrooms, dinner tables, and car rides.

You’re on the Trick Questions page.