This collection of math jokes just might be enjoyable enough for mathematicians and for students alike to enjoy a laugh or two. The jokes and funny sayings contain something essential about math, the mathematical way of thinking, and also mathematical pop-culture.

Maybe you’re trying to woo someone special in your calculus class? Maybe, it’s National Pi Day and you want to get a few chuckles from an audience? Or, maybe you’re just trying to impress your teacher? For whatever reason, the reason you’re here is that you’re looking for some good jokes and we have supplied a ton of them!

Here’s a formula for laughs: just keep reading and enjoy these exponentially.

Why should the number 288 never be mentioned?
It’s two gross.

Heard about the mathematical plant?
It has square roots.

Why is a math book always unhappy?
Because it always has lots of problems.

What tool do you use in maths?
Multi-plyers. 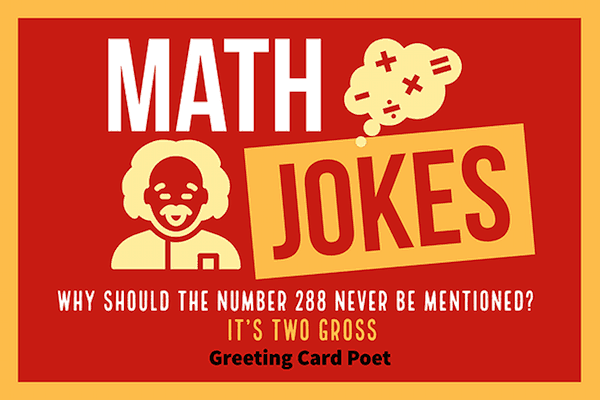 Why couldn’t the Moebius strip enroll at the school?
They required an orientation.

What does a mathematician do about constipation?
He works it out with a pencil.

Which tables do you not have to learn?
Dinner tables.

Why don’t you do arithmetic in the jungle?
Because if you add 4+4 you get ate.

Why did I divide sin by tan?
Just cos.

Where do math teachers go on vacation?
To Times Square.

What do you call friends who love math?
Algebros.

What is a mathematician’s favorite season?
Sum-mer.

What did one algebra book say to the other?
Don’t bother me, I’ve got my own problems.

How does a ghost solve quadratic equations?
By completing the scare.

How does a mathematician plow fields?
With a protractor.

Why did the circle do a flip?
To get in shape.

What do you get if you cross a math teacher and a clock?
Arithma-ticks.

I saw my math teacher with a piece of graph paper yesterday. I think he must be plotting something.

Have you heard about the mathematical plant?
It has square roots.

Check out these corny jokes. 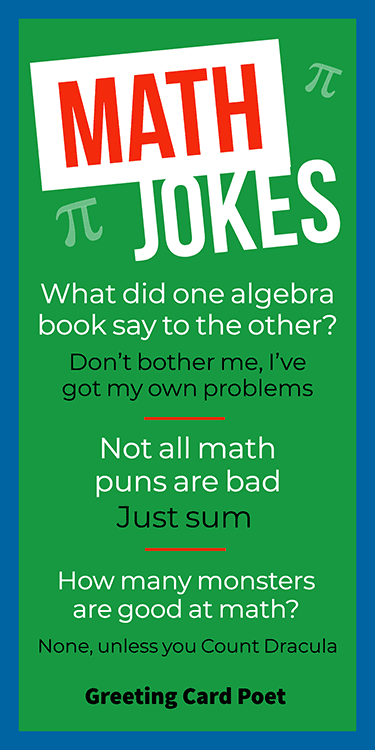 How many monsters are good at math?
None, unless you Count Dracula.

How do you keep warm in a square room?
You go into the corner, where it is always 90 degrees.

Why did the math book look so sad?
Because it had so many problems.

A circle is just a round straight line with a hole in the middle.
Decimals have a point.

Why do plants hate math?
Because it gives them square roots.

Why did the boy eat his math homework?
Because the teacher told him it was a piece of cake.

Have you heard the latest statistics joke?
Probably.

What did the acorn say when it grew up?
Geometry.

What do you call an empty parrot cage?
Polygon.

Why didn’t the quarter roll down the hill with the nickel?
Because it had more cents.

Did you hear about the constipated mathematician?
He worked it out with a pencil.

Why wasn’t the geometry teacher at school?
Because she sprained her angle.

Why was the obtuse angle so upset?
Because it was never right.

Why was the warlock so bad at math?
He never knew WITCH equation to use.

Where do multiplication problems eat breakfast?
At times tables.

What did the spelling book say to the math book?
I know I can count on you.

What do you call a number that can’t keep still?
A roamin’ numeral.

What is the definition of a polar bear?
A rectangular bear after a coordinate transformation.

Why did the chicken cross the Mobius strip?
To get to the same side.

I just saw my math teacher with a piece of graph paper…I think he must be plotting something.

Are monsters good at math?
No, unless you Count Dracula.

How does a math professor propose to his fiancee?
With a polynomial ring.

Why won’t Goldilocks drink a glass of water with 8 pieces of ice in it?
It’s too cubed.

What’s the integral of (1/cabin)d(cabin)?
A natural log cabin.

What is the first derivative of a cow?
Prime Rib.

Why was the parent’s function upset with its child?
It was stretched to its limit.

What is polite and works for the phone company?
A deferential operator.

Why was the Calculus teacher bad at baseball?
He was better at fitting curves than hitting them.

What wild animal is good at calculus?
The tangent lion.

What is purple and commutative?
An abelian grape.

Note: Do you have any great math jokes? Let us know via the contact us page.

I saw Pi fighting with the square root of two the other day…I told them to stop being so irrational.

What do mathematicians eat on Halloween?
Pumpkin Pi.

How do you know your math tutor is hungry?
She’ll work for pi.

Cakes are round but Pi is square.

Why did the Pi get its driver’s license revoked?
Because it didn’t know when to stop.

What do you get when you take the sun and divide its circumference by its diameter?
Pi in the sky.

Remember not to eat too much pi—it will give you a large circumference.

Having an argument with pi just goes around in circles.

Who invented the Round Table?
Sir Cumference.

Statistics show that 3.14 percent of sailors are pi-rates.

Why do teenagers travel in groups of 3 or 5?
Because they can’t even.

What did the zero say to the eight?
Nice belt.

Why did seven eat nine?
Because you’re supposed to eat 3 square meals a day.

Why did the two 4’s skip lunch?
They already 8.

Mike is an author, inventor, and founder of Greeting Card Poet.

You’re on the Math Jokes page.