You are here: Home / Good Analogy Examples and Definition

Finding good analogy examples doesn’t have to be as hard as finding a needle in a haystack. We’ve made it easy for you with 47 carefully researched analogies for you to review. But, we start things off with a definition of the term.

What is an analogy? It is a literary device compares two things and is designed to clarify a situation or scene or for the purpose of more detailed clarification or explanation.

Like similes, metaphors, and analogies are literary devices that authors often use to paint a vivid picture in the reader’s mind. The essence of this literary device is to set up a comparison that highlights similarities between two seemingly disparate items, it is by examining how the two items are alike in some way that leads to a clear understanding.

Differences between Similes, Metaphors, and Analogies

While similes, metaphors, and analogies are similar in that they all compare two different things, similes and metaphors are figures of speech while an analogy is more akin to a logical argument. It’s important for a writer to understand the differences between the three to help an author decide on which of the three to use.

Metaphors are not to be taken literally, while it does compare two things, one of those things means something else in the comparison between the two. For example, a metaphor might state…” he’s a shadow of his former self.” We know he “casts” a shadow, he’s not just a shadow and the phrase “former self” indicates he’s changed a lot.

So, if an analogy is more like a logical argument with the writer pointing out the similarities between two things. Here is an example from the “I have a dream speech” by Martin Luther King. “We will not be satisfied until justice rolls down like waters, and righteousness like a mighty stream.”

How to Write an Analogy

If you are going to use an analogy in a written text, consider other figures of speech and make sure it is the appropriate choice for the situation. Consider the two things you want to compare and what are the things they have in common. 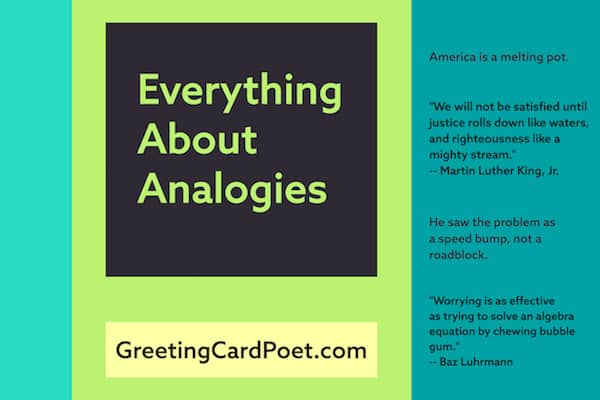 Common analogies have been used so much in everyday conversation that has become basically clichés. These analogies are highly recognizable, and you know you’ve heard them before. That doesn’t mean you shouldn’t use them; it just means that your reader may not find their usage unique or clever. At Greeting Card Poet, we’ve assembled some examples of the most well-known analogies:

7.) He saw the problem as a speed bump, not a roadblock.

8.) That’s as useful as rearranging the deck chairs on the Titanic.

9.) That movie was a roller coaster ride of emotions.

10.) Life is like a box of chocolates; you never know what you’re going to get.

11.) Mary had a little lamb; her fleece was white as snow.

15.) Finding a good man is as hard as finding a needle in a haystack.*

*Note: This is from a Dusty Springfield song written by William Stevenson and Norman Whitfield. It was first recorded in 1965 and wasn’t released until 1996. The phrase is meant to show just how hard and daunting a task it is to find a good man. It is going to be very hard and take a long time.

Just like authors love to use similes and metaphors to add an element of visualization to their writings, the same is true of analogies. William Shakespeare was a big fan of analogies and used them in all his plays. Positioned and written correctly, analogies can elevate writing to a new level and make the reader enjoy a book even more. There are examples of analogy in books, poems, songs, speeches, plays, movies, and more, here are a few examples:

16.) Withdrawal of U.S. troops will become like salted peanuts to the American public; the more U.S. troops come home, the more will be demanded.
Henry Kissinger

17.) If you want my final opinion on the mystery of life and all that, I can give it to you in a nutshell. The universe is like a safe to which there is a combination. But the combination is locked up in the safe.
Peter De Vries

18.) O, she doth teach the torches to burn bright! Her beauty hangs upon the cheek of night, Like a rich jewel in an Ethiop’s ear.
William Shakespeare, Romeo and Juliet

19.) It has been well said that an author who expects results from a first novel is in a position similar to that of a man who drops a rose petal down the Grand Canyon of Arizona and listens for the echo.
P.G. Wodehouse

20.)  They crowded very close about him, with their hands always on him in a careful, caressing grip, as though all the while feeling him to make sure he was there. It was like men handling a fish which is still alive and may jump back into the water. But he stood quite unresisting, yielding his arms limply to the ropes, as though he hardly noticed what was happening.
George Orwell

21.) People are like stained glass windows. They sparkle and shine when the sun is out, but when the darkness sets in, their true beauty is revealed only if there is a light from within.
Elisabeth Kubler-Ross

22.) You see, wire telegraph is a kind of very, very long cat. You pull his tail in New York and his head is meowing in Los Angeles. Do you understand this? And radio operates exactly the same way; you send signals here; they receive them there. The only difference is that there is no cat.
Albert Einstein

23.) Reading poetry is like undressing before a bath. You don’t undress out of fear that your clothes will become wet. (And) you undress because you want the water to touch you. You want to completely immerse yourself in the feeling of the water and emerge anew.
Kamand Kojouri

24.) Worrying is as effective as trying to solve an algebra equation by chewing bubble gum.
Baz Luhrmann 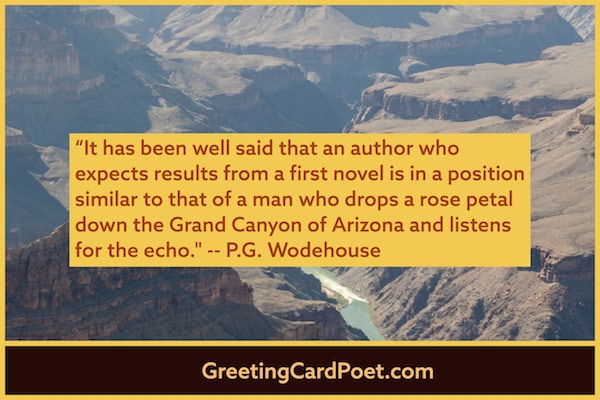 Analogies have a certain puzzle quality that children are fascinated with and when they figure out the similarities between two things being compared, they are excited and proud of themselves. Being able to accurately read and write analogies improves both the writing and reading skills of children and makes both skills more enjoyable. The free imagination of children allows them to “see” imagery from an analogy that an adult might not appreciate. The more children learn about the English language the easier reading and writing will be for them. Here are some examples of analogies that kids might enjoy:

30.) Bees buzzed around the hive while the bears returned to their den.

34.) If you can speak you can sing, and if you can walk you can dance.

41.) An apple is considered a fruit, while a carrot is a type of vegetable.

42.) Acorns in the woods are like apple seeds in an orchard.

43.) The two of them were as far apart as a football field and a tennis court.

44.) A picture can be blurred while a knife is dull.

45.) The nose is used to smell the flowers, while the ear hears the birds.

Tim Moodie is to writing as Frank Sinatra is to signing. Okay, that analogy is a bit of a hyperbole. But I do know I love to write, and Frank Sinatra loved to sing. Tim has been writing all kinds of things, including analogies his entire adult life. He’s written everything from the script for the Wayne’s World Video Game for Mattel to an article about toys for mentalfloss.com and from TV Commercials for One Hour Martinizing to ghostwriting jokes for an author’s book tour. It may be debatable about how good a writer he is, but he is interesting.