You are here: Home / Best San Francisco Quotes and Sayings

We’ve lined up some of our favorite San Francisco quotes and sayings from one of our favorite cities. C’mon, how many cities have named their omnipresent fog?  His name is “Karl the Fog”. Check out Karl’s Twitter following with over 200,000 followers. How great is that?

Whether it’s the weather, the people, its natural beauty, industries or anything else about it, San Francisco has always been special. It is the city of creativity. The culture of this city is like no other. Many important men and women have made the Golden City their home because they fell in love with it. And many cherish it as the best city in the world and dream of living here someday. Few do not fall for the City the first time they visit it.

San Francisco’s influence is seen in literature, movies, and culture. It’s a city that’s made an impact on American’s across the country and visitors from outside the country. Here are some famous San Francisco quotes and sayings about this beautiful city.

San Francisco has only one drawback – ’tis hard to leave.
Rudyard Kipling

There may not be a Heaven, but there is San Francisco.
Ashleigh Brilliant

If you’re not alive, San Francisco will bring you to life.
William Saroyan

One day if I go to heaven … I’ll look around and say, ‘It ain’t bad, but it ain’t San Francisco.’
Herb Caen

You know what it is? (It) is a golden handcuff with the key thrown away.
John Steinbeck

You are fortunate to live here. If I were your President, I would levy a tax on you for living in San Francisco!
Mikhail Gorbachev

It’s an odd thing, but anyone who disappears is said to be seen in San Francisco.
Oscar Wilde

San Francisco is a city where people are never more abroad than when they are at home.
Benjamin F. Taylor

Anyone who doesn’t have a great time in San Francisco is pretty much dead to me.
Anthony Bourdain 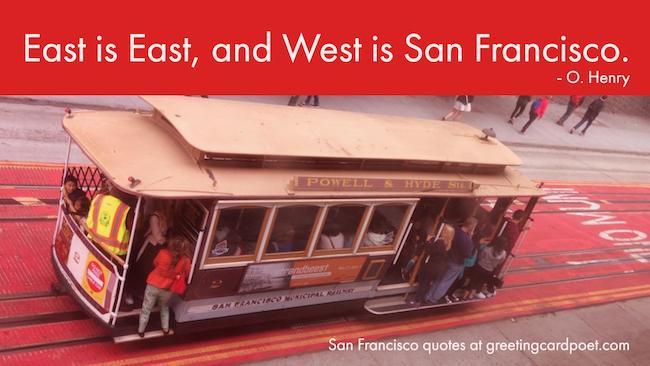 City by the Bay Sayings

San Francisco is really fun and liberal, and it’s my kind of politics. It’s like being Jewish in front of Jewish people.
Elayne Boosler

I always see about six scuffles a night when I come to San Francisco. That’s one of the town’s charms.
Errol Flynn

Los Angeles? That’s just a big parking lot where you buy a hamburger for the trip to San Francisco.
John Lennon

San Francisco is a mad city – inhabited for the most part by perfectly insane people whose women are of remarkable beauty.
Rudyard Kipling

I have always been rather better treated in San Francisco than I actually deserved.
Mark Twain

San Francisco is the only city I can think of that can survive all the things you people are doing to it and still look beautiful.
Frank Lloyd Wright

East is East, and West is San Francisco.
O. Henry

I was appalled that the San Francisco ethic [of the 1960s] didn’t mushroom and envelop the whole world into this loving community of acid freaks. I was very naive.
Grace Slick

San Franciscans are very proud of their city, and they should be.  It’s the most beautiful place in the world.
Robert Redford

I can walk down the streets of San Francisco, and here I’m normal.
Robin Williams

To a traveler paying his first visit, it has the interest of a new planet. It ignores the meteorological laws which govern the rest of the world.
Fitz Hugh Ludlow

When you get tired of walking around in San Francisco, you can always lean against it.
Unknown

San Francisco itself is art, above all literary art. Every block is a short story, every hill a novel. Every home a poem, every dweller within immortal. That is the whole truth.
William Saroyan

The Bay Area is so beautiful, I hesitate to preach about heaven while I’m here.
Billy Graham

It is a good thing the early settlers landed on the east coast… if they’d landed in San Francisco, the rest of the country would still be uninhabited.
Herbert Mye

A city is where you can sign a petition, boo the chief justice, fish off a pier, gape at a hippopotamus, buy a flower at the corner, or get a good hamburger or a bad girl at 4 a.m. A city is where sirens make white streaks of sound in the sky and foghorns speak dark grays — San Francisco is such a city.
Herb Caen

San Francisco is one of the great cultural plateaus of the world — one of the really urbane communities in the United States — one of the truly cosmopolitan places and for many, many years, it always has had a warm welcome for human beings from all over the world.
Duke Ellington

The extreme geniality of San Francisco’s economic, intellectual and political climate makes it the most varied and challenging city in the United States.
James Michener

I have seen purer liquors, better segars, finer tobacco, truer guns and pistols, larger dirks and bowie knives, and prettier courtesans here in San Francisco than in any other place I have ever visited.
Hinton Helper

San Francisco beats the world for novelties, but the inventive faculties of her people are exercised on a specialty. Controversy is our forte.
San Francisco Call

Every man should be allowed to love two cities, his own and San Francisco.
Gene Fowler

I prefer a wet San Francisco to a dry Manhattan.
Larry Geraldi

Chicago is the great American city, New York is one of the capitals of the world, and Los Angeles is a constellation of plastic; San Francisco is a lady.
Norman Mailer

I left my Heart

It may be Baghdad by the Bay to you, but to me it’s Resurrection City.
Robert Kennedy

I’m just mad for San Francisco. It is like London and Paris stacked on top of each other.
Twiggy

This is the friendliest city in the world.
Joe di Maggio

We don’t have a lot of farms there. Well, we do have one — it’s a mushroom farm, so you know what that means.
Nancy Pelosi

There are a thousand viewpoints in the viewtiful city.
Herb Caen

The port of San Francisco is a marvel of nature, and might well be called the harbor of harbor.
Juan Bautista de Anza

San Francisco is one of my favorite cities in the world…I would probably rank it at the top or near the top.  It’s small but photogenic and has layers…You never have problems finding great angles that people have never done.
Ang Lee

The Golden Gate wasn’t our fault either, but we still put a bridge across it.
Larry Wall

Such was life in the Golden Gate: / Gold dusted all we drank and ate, / And I was one of the children told, / ‘We all must eat our peck of gold.’
Robert Frost

The Golden Gate Bridge should have a long bungee cord for people who aren’t quite ready to commit suicide but want to get in a little practice.
George Carlin

Animation had been used only for things like King Kong and the destruction of cities, which was very popular in the 1950s. I got tired of destroying cities – I destroyed New York, I destroyed San Francisco’s Golden Gate Bridge, Rome, and Washington. I was looking for a new outlet, and I came across the Sinbad legends.
Ray Harryhausen

Drafting is like painting the Golden Gate Bridge. The closer you get to the end, the more you start to worry about the beginning.
Peter James

You can find your way across this country using burger joint the way a navigator uses stars….We have munched Bridge burgers in the shadow of the Brooklyn Bridge and Cable burgers hard by the Golden Gate, Dixie burgers in the sunny South and Yankee Doodle burgers in the North. We had a Capitol Burger – guess where. And so help us, in the inner courtyard of the Pentagon, a Penta burger.
Charles Kuralt

This studio has more suspensions than the Golden Gate Bridge.
Humphrey Bogart on Warner Bros.

Baghdad by the Bay

The City By the Bay

San Fran – frowned upon by many locals.

San Francisco: The City that Knows How

If you know any other San Francisco quotes, sayings or slogans you’d like to see included, please send them our way via the Contact page. Thanks!