These Alfred Hitchcock quotes capture the essence of one of the most famous filmmakers, directors, and producers in the history of cinema. For some sixty years, Hitchcock directed classics like Rear Window, North By Northwest, Vertigo, Psycho and The Birds.

Hitchcock’s style of filmmaking placed moviegoers in a voyeur role as they watched with fear and terror. Using techniques like camera movement to simulate a person’s gaze and framing shots to increase the anxiety level, Hitchcock was the master at suspense.

His takes on movies, filmmaking and life are entertaining and definitely worthy of closer examination. Check them out below.

1.) Always make the audience suffer as much as possible.

2.) Blondes make the best victims. They’re like virgin snow that shows up the bloody footprints.

3.) There is no terror in the bang, only in the anticipation of it.

4.) I never said all actors are cattle; what I said was all actors should be treated like cattle.

5.) Revenge is sweet and not fattening.

6.) Puns are the highest form of literature.

7.) There is something more important than logic: imagination. 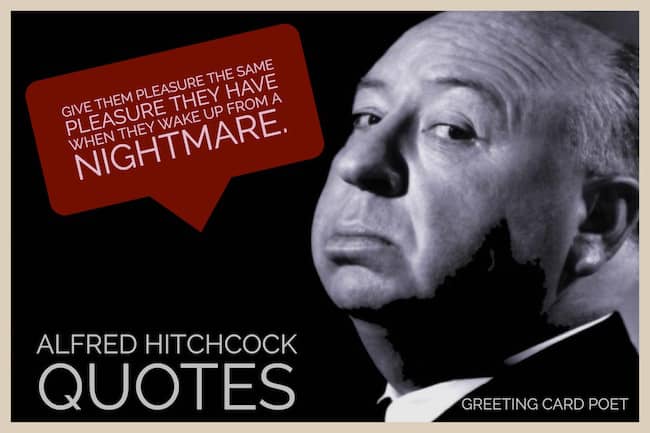 A good film is when the price of the dinner, the theatre admission and the babysitter were worth it.

The length of a film should be directly related to the endurance of the human bladder.

For me, the cinema is not a slice of life, but a piece of cake.

Man does not live by murder alone. He needs affection, approval, encouragement and, occasionally, a hearty meal.

The only way to get rid of my fears is to make films about them.

Ideas come from everything.

The paperback is very interesting but I find it will never replace the hardcover book – it makes a very poor doorstop.

Really, the novelist has the best casting since he doesn’t have to cope with the actors and all the rest.

If it’s a good movie, the sound could go off and the audience would still have a perfectly clear idea of what was going on.

Drama is life with the dull bits cut out.

Suspense is like a woman. The more left to the imagination, the more the excitement.

All About Movies – Alfred Hitchcock Quotes

The ideal husband understands every word his wife doesn’t say.

There’s nothing to winning, really. That is, if you happen to be blessed with a keen eye, an agile mind, and no scruples whatsoever.

I have a perfect cure for a sore throat: cut it.

Television has done much for psychiatry by spreading information about it, as well as contributing to the need for it.

To make a great film you need three things – the script, the script and the script.

Television is like the invention of indoor plumbing. It didn’t change people’s habits. It just kept them inside the house.

A glimpse into the world proves that horror is nothing other than reality.

I have a feeling that inside you somewhere, there’s somebody nobody knows about.

When we think we have been hurt by someone in the past, we build up defenses to protect ourselves from being hurt in the future. So the fearful past causes a fearful future and the past and future become one.

Luck is everything. My good luck in life was to be a really frightened person. I’m fortunate to be a coward, to have a low threshold of fear, because a hero couldn’t make a good suspense film. 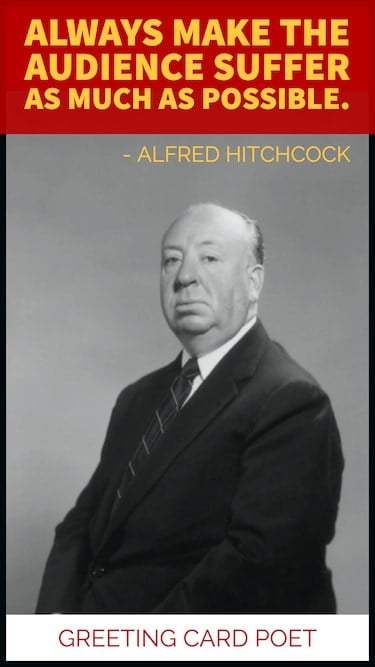 I’m a typed director. If I made Cinderella, the audience would immediately be looking for a body in the coach. (One of the best Alfred Hitchcock quotes!)

If I won’t be myself, who will?

The silent pictures were the purest form of cinema.

It’s only a movie, and, after all, we’re all grossly overpaid.

If you can’t do it naturally, then fake it.

I am to provide the public with beneficial shocks.

I’m sure anyone who likes a good crime, provided it is not the victim.

Note: That’s 39 quotations in honor of his movie classic The 39 Steps. The rest are just bonus!

Dialogue should simply be a sound among other sounds, just something that comes out of the mouths of people whose eyes tell the story in visual terms.

T.V. has brought murder back into the home where it belongs.

Television is like the American toaster, you push the button and the same thing pops up every time.

I’m a writer and, therefore, automatically a suspicious character.

I’m full of fears and I do my best to avoid difficulties and any kind of complications. I like everything around me to be clear as crystal and completely calm.

Mystery is an intellectual process. But suspense is essentially an emotional process.

I’m not against the police; I’m just afraid of them.

I can’t read fiction without visualizing every scene. The result is it becomes a series of pictures rather than a book.

There is nothing quite so good as burial at sea. It is simple, tidy, and not very incriminating.

The picture’s over. Now I have to go and put it on film.

Reality is something that none of us can stand, at any time.

The best actor is the man who can do nothing extremely well.

In films, murders are always very clean. I show how difficult it is and what a messy thing it is to kill a man.

Seeing a murder on television can help work off one’s antagonisms.

Fear isn’t so difficult to understand. After all, weren’t we all frightened as children?

It seems to me that television is exactly like a gun. Your enjoyment of it is determined by which end of it you’re on.

Nothing has changed since Little Red Riding Hood faced the big bad wolf. What frightens us today is exactly the same sort of thing that frightened us yesterday. It’s just a different wolf.

I have never known birds of different species to flock together. The very concept is unimaginable. Why, if that happened, we wouldn’t stand a chance! How could we possibly hope to fight them?

People don’t always express their inner thoughts to one another; a conversation may be quite trivial, but often the eyes will reveal what a person really thinks or feels.

Love those wrongdoers, they need it more than you.

When an actor comes to me and wants to discuss his character, I say, ‘It’s in the script.’ If he says, ‘But what’s my motivation?, ‘ I say, ‘Your salary.’

One must never set up a murder. They must happen unexpectedly, as in life.

Making a film means, first of all, to tell a story. That story can be an improbable one, but it should never be banal. It must be dramatic and human.

Even my failures make money and become classics a year after I make them.

Never judge a country by its politicians.

Happiness is a small house, with a big kitchen.

Conversation is the enemy of good wine and food.

I know we’re only human, we do go in for these various emotions, call them negative emotions, but when all these are removed and you can look forward and the road is clear ahead, and now you’re going to create something — I think that’s as happy as I’ll ever want to be.

When we tell a story in cinema we should resort to dialogue only when it’s impossible to do otherwise.

If I were to make another picture set in Australia I’d have a policeman hop into the pocket of a kangaroo and yell, Follow that car!

Your best side? My dear, you’re sitting on it.

To me, Psycho was a big comedy. Had to be.

In a good marriage, each is the other’s better half.

There is nothing more scary than a closed door.

Never turn your back on a friend.

I try to offset any tendency towards the macabre with humor.

A woman of mystery is one who also has a certain maturity and whose actions speak louder than words.

I always try to look at things as though I were remembering them three years later.

I’m not much into rear window ethics.

A human is not poor if he can still laugh.

Music is born into a man like a heartbeat and you can’t rip it out without killing him.

When you finish the script, the film is perfect. But in shooting it you lose perhaps 40 percent of your original concept.

Happiness is a clear horizon – nothing to worry about on your plate, only things that a creative and not destructive. I think hatred is wasted energy, and it’s all non-productive.

Creativity Quotes for the Playful Mind