You are here: Home / Anniversary Ideas: 17 Fun Ways To Celebrate

My wife and I have been married for over 40 years, so I’m a bit of an expert at anniversary ideas and ways to celebrate. Last year, we spent ours in Maui and Kauai, Hawaii. It was spectacular. More about that later.

According to a study by American Express, spending on anniversaries fluctuates greatly over the years. On their first anniversary, couples spend an average of $44.00, on their tenth that grows to $91.00, on their twentieth $125.00, the twenty-fifth is considered very special at $341.00, with the thirtieth dipping down to $250.00, the fortieth is $407.00, and the admirable fiftieth averages out at $604.00.

An informal survey by Discover Card showed that, on average, couples spend $21.00 more for each year of marriage. I suppose it’s only fitting that the expense goes up because each year of wedding bliss is treasured more (that’s my story and I’m sticking to it).

As each anniversary approaches, many married couples face the challenge of how they should celebrate the milestone. To help you out, I’ve assembled a list that has withstood the test of time and has been field-tested.

Be creative. Think big. Have fun!

Anniversary Ideas: Fun Things To Do

1.) Have a “Treat Yo Self” day for two. Borrowed from Tom Haverford and Donna Meagle of Parks and Recreation, this is a day devoted to self-care. Pamper yourself with massages at a spa. Buy that pair of shoes you thought was a splurge. Eat that favorite high-calorie dish. When in doubt, your partner should just say, “Treat Yo Self.”

2.) Do something you have never done before. Find something exciting that you have never done as a couple, it could be a ride in a hot air balloon or skydiving, or something less dangerous like throwing axes or bocce ball, or going to a distillery or winery that you’ve never been two. Just some special things that you can do and enjoy together.

3.) Recreate your first date. Do everything you did on your first date, go to the places you visited, eat and drink the same things, wear clothes as close to what you wore then and try and recreate that feeling.

5.) Make a playlist of the music you enjoyed while you were dating. Think back about the songs you listened to while you were dating and even at your wedding. Once you have it put together you can play it while you enjoy a nice homemade candlelit dinner for two. Or, for those more adventurous, visit a karaoke bar and belt out your song.

Check out these fun Anniversary Wishes. 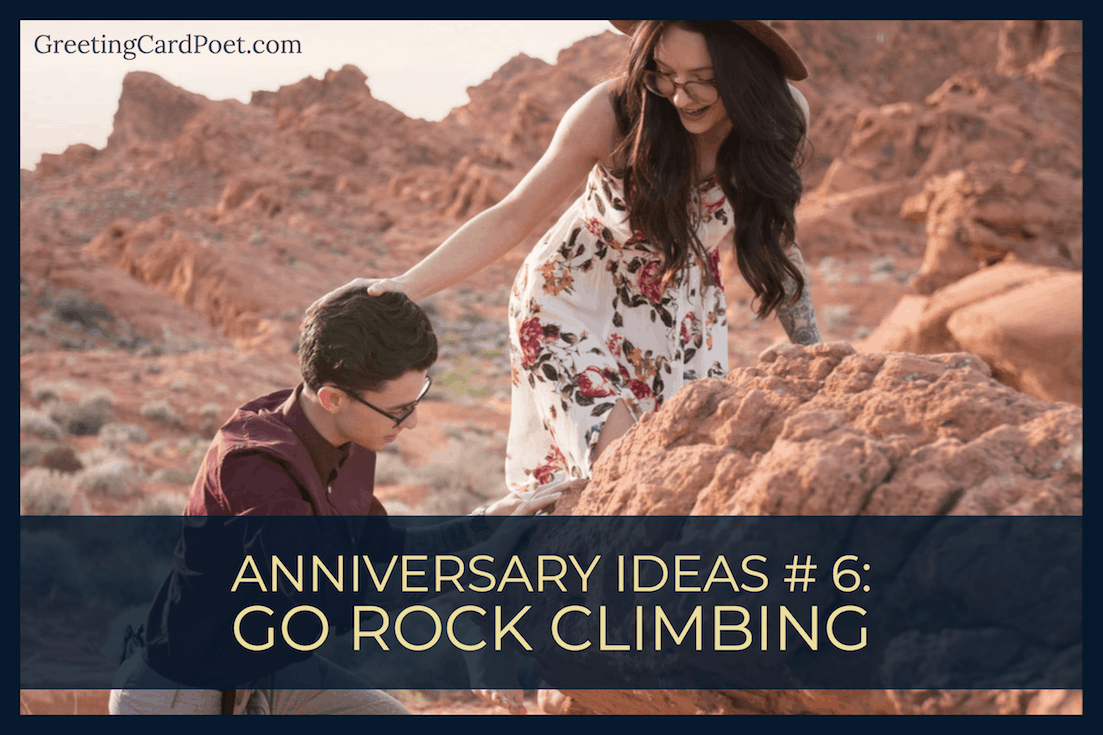 Get Out of Your Comfort Zone With These Anniversary Ideas

6.) Go rock climbing. Ok, first things first, forget about any symbolism at play here. Sure, it can be said that marriage is rocky, an uphill climb or on the rocks, but that’s not you. Instead, think of this. It’s said that when couples do dangerous things together, they’re more likely to bond closely over these experiences. See how tight you become after climbing to new heights.

7.) Take out your wedding album and go through it together. Find your wedding album, you know where you put it, and slowly and thoughtfully go through all the pictures reminiscing about the specific memories that each picture brings to mind. You might even write a few things down and place them in the book for when you celebrate your next anniversary.

8.) Visit an art gallery with this specific project in mind. Each partner has to identify the three works of art that the other would like the most. The winning guesser receives a prize. I’ll leave it up to you as to what that prize might be.

9.) Enjoy a special breakfast at sunrise. Plan to get up early and watch the sunrise together and then make a delicious breakfast or brunch and take your time to enjoy it, toasting your love and memories of each other. Once you have finished breakfast/brunch and the dishes are put away, it might be a very good time to take a well-needed nap.

10.) Go to a movie matinee and spend at least $25 on treats (which shouldn’t be too hard). Bonus points if the movie is a romance. Post movie, drive to your favorite park and take a long walk reminiscing about the first time you met, your first date and when you met each others’ parents. 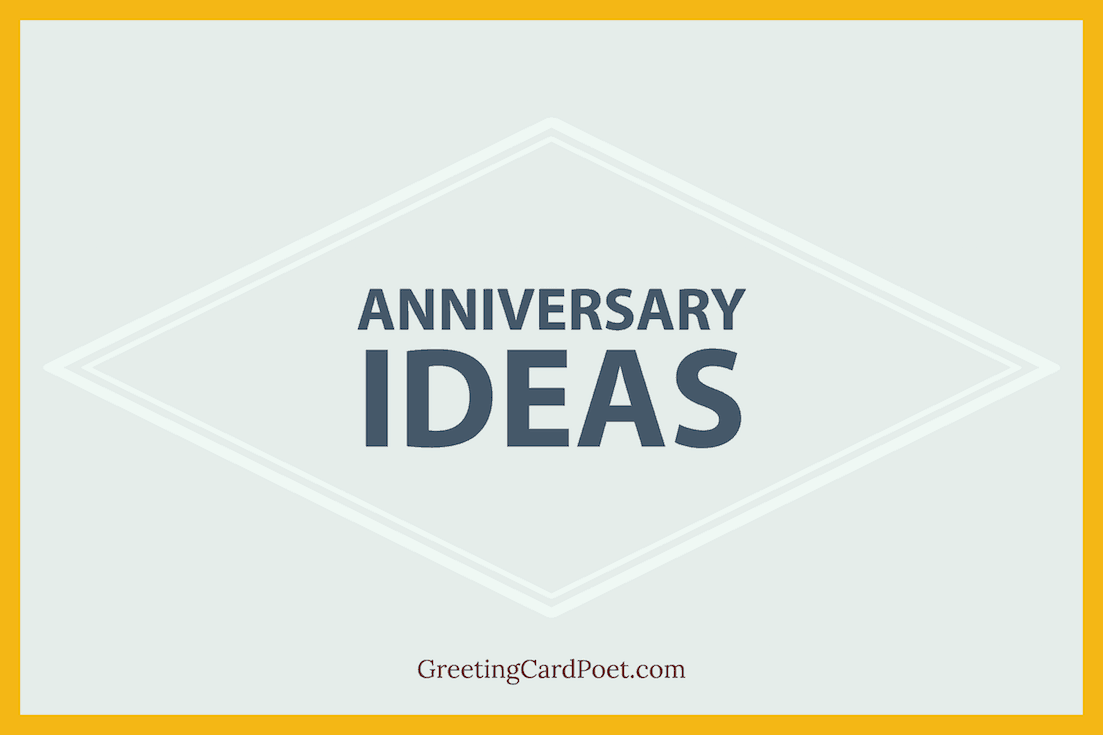 11.) Dine al fresco, put together a well thought out picnic. Pack some champagne, glasses, dishes, napkins, silverware, and food. Cold fried chicken and potato salad are good, cheese French bread and meats are a great choice, or even making hearty sandwiches with snacks will work. Bring a blanket and maybe a couple of pillows, depending on your age, and find a beautiful, cozy spot to dine.

12.) Surprise your spouse with a concert trip. Buy tickets for a concert performance of your spouse’s favorite musical artist in a fun city, e.g. Michael Bublé in New York City. Plan a whole weekend around getting there the day before, visiting all the fun places, and then going to the musical performance. This is a direction that is sure to hit the right note.

13.) Put together your own photo booth. Find a tripod for your phone or digital camera and make sure one or both have a self-timer. Keep your designated space well-stocked with props like hats and disguises or funny signs and start taking pictures. Because everything is digital you can check them out right away and keep the good and eliminate the bad. share them with family and friends.

14.) Call up an Uber driver to take you on a local brewery tour. Check out the offerings at many different breweries and carve out some time for lunch or dinner. Make sure you’re not driving on this adventure.

15.) Take a painting class together. Painting classes are available everywhere these days and taking one together can be fun with wine and food served and great advice from the teachers. Then hang the pictures that you made together and make that a special event too. It’s one of those anniversary ideas that leaves you with not only a great memory, but also a keepsake.

16.) Spend an entire day together doing nothing. How many times have you really done that? spend a whole day together just the two of you and don’t plan anything, just be together. Workaround the house, go to the grocery store, have lunch together. No going into the office, no family and friends, just the two of you talking and kissing and remembering your anniversary. Check out our Happy Anniversary Messages and Wishes page.

17.) Go on a trip. It doesn’t have to be to an expensive, exotic locale, but a road trip to a nearby bed and breakfast, a popular winery, nearby beach, or a nice spot to watch a sunset. Just make sure that you think it out well and plan for all the details. However, if you have the time and money, do it upright and jet off to Paris to celebrate your anniversary.

Have any other anniversary ideas that would go nicely on this page? Let us know via the contact page.

The Tradition of Giving Specific Items for Specific Year Anniversaries

Believed to have begun in Germany, it was traditional for the husband to give his wife a silver wreath on their 25th anniversary. The custom evolved into a Gold Wreath on 50th anniversaries. This continued for a very long time, but at some point, during the 1930s, the practice of celebrating every annual anniversary became popular, and gifts were exchanged each year not just on the 25th and 50th.

So, it was only logical that other materials would be suggested for decade milestones like tin for 10 years, China for 20 years, silver for 25 years, pearl for 30 years, ruby for 40 years, gold for 50 years, diamond for 60 years, platinum for 70 years, oak for 80 years, and stone for the 90-year anniversary.

Other interesting gifts include paper for the 1st, lace for the 13th, crystal for the 15th, opal for the 24th, and moonstone for the 85th.

In Denmark, the twelve-and-one-half year anniversary is a big deal and there are elaborate rules to follow for that date. The friends and family of the bride and groom create an arch that encompasses the front door. For the 12 1/2 anniversary the arch is made of copper (but it only goes halfway up the door), for the 25th a silver arch is made and for the 50th…gold!

The neighborhood and family show up at the happy couple’s house on the morning of their anniversary and serenade them. All of the attendees are invited inside for Danish pastries and coffee. That night a party is thrown for the anniversary twosome and a wonderful dinner is served to all the guests.

My wife and I celebrated our 40th anniversary in Hawaii last year and everywhere we went, restaurants, pubs, hotels, attractions, and stores, we made sure to tell people it was our 40th wedding anniversary. We were amazed at how much discounted and free stuff we got. So, if you are celebrating your special day, don’t be afraid to play the “anniversary card” wherever you go. You might be astounded by the perks.

Tim has been happily married for 40 years most of which he has worked as a creative director, greeting card writer, and toy inventor.

You’re on our Anniversary Ideas page.