Test your knowledge with these math riddles and brain teasers. You’ll find easy riddles and math puzzlers suitable for kids. For those looking for a greater challenge, take on the difficult math riddles below.

Educators use math story problems to enhance understanding and visualization for their students. These math riddles with answers are a fun way to test your ability in solving math problems.

If two’s company and three’s a crowd, what are four and five?
Nine.

If you multiply this number by any other number, the answer will always be the same. What number is this?
Zero.

A little boy goes shopping and purchases 12 tomatoes. On the way home, all but 9 get mushed and ruined. How many tomatoes are left in good condition?
Nine tomatoes. 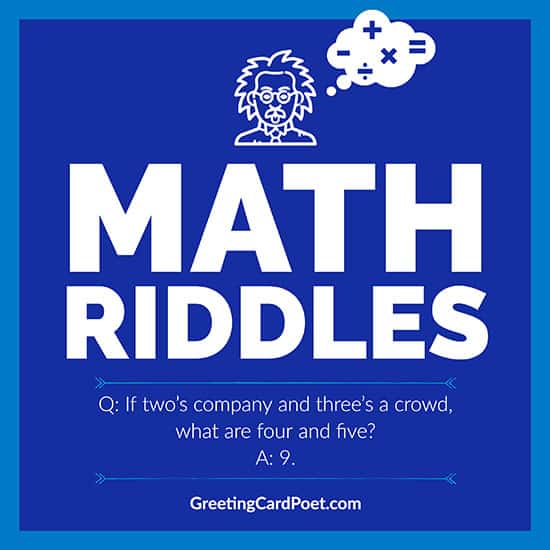 What occurs twice in a week, once in a year but never in a day?
The letter E.

If there are 4 apples and you take away 3, how many do you have?
Three apples.

Which month has 28 days?
All of them of course!

What 4 days of the week start with the letter T?
Tuesday, Thursday, Today and Tomorrow.

What goes up and doesn’t come back down?
Your age.

What has a thumb and four fingers but is not alive?
A glove.

What occurs once in every minute, twice in every moment and yet never in a thousand years?
The letter M.

I am an odd number; take away an alphabet and I become even. What number am I?
Seven (SEVEN-S=EVEN).

Where do fish keep their money?
In the river bank.

If you buy a rooster for the purpose of laying eggs and you expect to get three eggs each day for breakfast, how many eggs will you have after three weeks?
None, roosters do not lay eggs.

I am an odd number. Take away a letter and I become even. What number am I?
Seven.

What weighs more, a pound of iron or a pound of feathers?
Both would weigh the same.

When asked how old she was, Janey replied, “In two years I will be twice as old as I was five years ago.” How old is she?
She’s 12.

How can you make the following equation true by drawing only one straight line: 5+5+5=550 Can you figure it out?
Draw a line on the first plus sign that turns it into a 4! The equation then becomes true: 545+5=550. You could also change the equal symbol to a crossed-out equal symbol which means “not equal to.”

Caleb is 54 years old, and his father Franklin is 80. How many years ago was Franklin three times the age of his son Caleb?
41 years ago.

If it were two hours later, it would be half as long until midnight as it would be if it were an hour later. What time is it now?
9 pm.

There are several books on a bookshelf. If one book is the 4th from the left and 6th from the right, how many books are on the shelf?
9 books.

What’s the easiest way to double your money?
Put it in front of a mirror.

If two’s company and three’s a crowd, what are four and five?
Four and five = nine.

Adored by few, Feared and hated by many. Mistress of the entire universal reason, Master in the art of numbers. Some may have solved many of your mysteries, But there still many of them to find. What are they?
Mathematics.

Two fathers and two sons go fishing. Each of them catches one fish. So why do they bring home only three fish?
Because the fishing group consists of a grandfather, his son, and his son’s son.

What has a face and two hands but no arms or legs?
A clock.

If it took 6 people 9 hours to build a barn, how long would it take 12 people to build the same barn?
None, the barn is already built.

One out of 9 otherwise identical balls is overweight. How can it be identified after 2 weighings?
Weigh a group of 3 balls against another group of 3, then you’ll know which group of 3 contains the heavy ball. Pick 2 balls from that group and weigh one against the other.

I am a three-digit number. My tens digit is five more than my one’s digit. My hundreds digit is eight less than my tens digit. What number am I?
194.

If seven people meet each other and each shakes hands only once with each of the others, how many handshakes will there have been?
21 (most people would think there were 42 handshakes).

In a pond, there are some flowers with some bees hovering over them. How many flowers and bees are there if both the following statements are true: 1. If each bee lands on a flower, one bee doesn’t get a flower. 2. If two bees share each flower, there is one flower left out.
4 bees and 3 flowers.

Janie’s friends were chipping in to buy her a wedding shower present. At first, 10 friends chipped in, but 2 of them dropped out. Each of the 8 had to chip in another dollar to bring the amount back up. How much money did they plan to collect?
$40 (10 at $4, or 8 at $5). 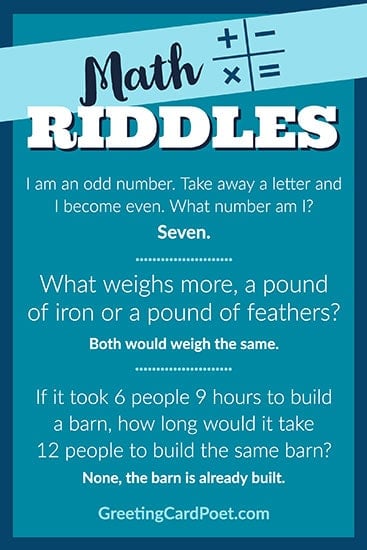 A man dies of old age on his 25th birthday. How is this possible?
He was born on February, 29th.

I am a three-digit number.
My tens digit is five more than my one’s digit.
My hundreds digit is eight less than my tens digit.
What number am I?
Number 194.

What 3 positive numbers give the same result when multiplied together as when added together?
1, 2 and 3.

If you can purchase 8 eggs for 26 cents, how many can you buy for a cent and a quarter?
Eight.

Three matches are sitting on a table. Without adding another make for three matches four. You are not allowed to break any of the matches.
Shape the 3 matches into a roman numeral four. 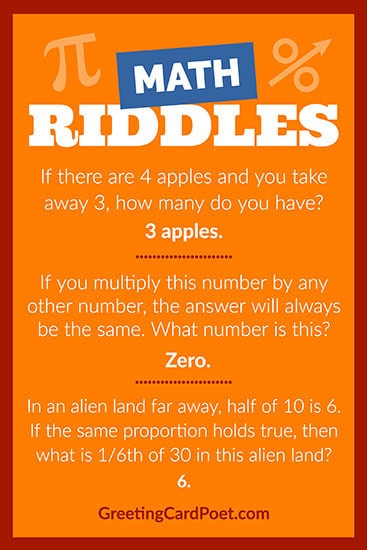 Two schoolgirls were traveling from the city to a summer cottage on an electric train. “I notice,” one of the girls said “that the trains coming in the opposite direction pass us every 5 minutes. What do you think—how many trains arrive in the city in an hour, given equal speeds in both directions?” “Twelve, of course,” the other girl answered, “because 60 divided by 5 equals 12.” The first girl did not agree. What do you think?

If the girls had been on a standing train, the first girl’s calculations would have been correct, but their train was moving. It took 5 minutes to meet a second train, but then it took the second train 5 more minutes to reach where the girls met the first train. So the time between trains is 10 minutes, not 5, and only 6 trains per hour arrive in the city.

A snail is at the bottom of a 20 meters deep pit. Every day the snail climbs 5 meters upwards, but at night it slides 4 meters back downwards. How many days does it take before the snail reaches the top of the pit?

There is a certain club which is for men only. There are 600 men who belong to this club and 5% of these men wear one earring. Of the other 95% membership, half wear two earrings and the other half wear none. How many earrings are being worn in this club?

Six hundred. We know that 5% or 30 of the men are wearing one earring. Of the other 95%, or 570, we know that half are wearing two earrings and the other half none. This is the same as if they all wore one.

Are Math Riddles Just For Nerds?

Heck no! Math riddles are for everyone who finds enjoyment in them or who is interested in advancing their learning and expanding their minds.

Here are some notables who have taken an interest in math:

Being able to solve math riddles can help you solve other challenges in your day-to-day life. If anyone makes fun of you for liking math riddles and puzzles, it’s likely that those folks have a hard time solving the problems on their own.

Mike is an author, toy inventor, and publisher of Greeting Card Poet.