With C.S. Lewis quotes, one expects some of the magic and wisdom typical in many of his books.  These quotes don’t disappoint.

C.S. Lewis – full name Clive Staples Lewis – was a famous Irish-born writer and academician who was most famous for his work, Chronicles of Narnia. He has also written several Christian texts.

He is well known for the use of philosophy and logic for supporting this faith. And his works on the Christian faith are highly regarded by scholars, theologians, and the masses. Everyone can find wisdom in his takes on love, friendship, life, faith, and other areas where he excelled.

Joy is the serious business of Heaven.

We are what we believe we are.

Do not dare not to dare.

You can never get a cup of tea large enough or a book long enough to suit me.

You are never too old to set another goal or to dream a new dream.

The heart never takes the place of the head: but it can, and should, obey it.

Some day you will be old enough to start reading fairy tales again. 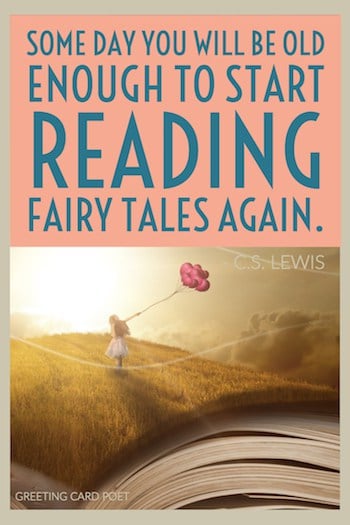 These C.S. Lewis love quotes express the thoughts many of us have when consumed by that loving feeling.

Love is something more stern and splendid than mere kindness.

To love at all is to be vulnerable. Love anything, and your heart will certainly be wrung and possibly be broken.

Love is not affectionate feeling, but a steady wish for the loved person’s ultimate good as far as it can be obtained.

Love may forgive all infirmities and love still in spite of them: but Love cannot cease to will their removal. 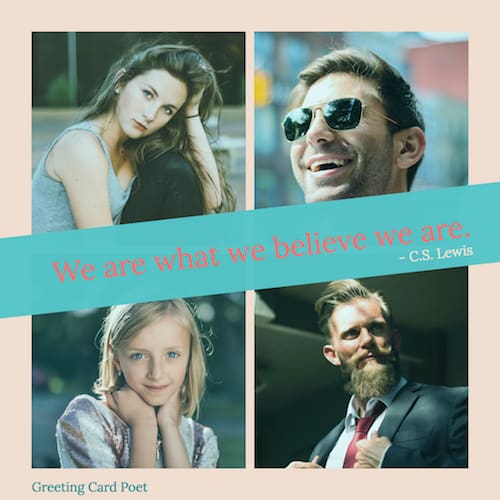 Friendship is born at the moment when one man says to another What! You too? I thought that no one but myself.

Friendship is unnecessary, like philosophy, like art. It has no survival value; rather it is one of those things which give value to survival.

What draws people to be friends is that they see the same truth. They share it.

In each of my friends, there is something that only some other friend can fully bring out.

We live, in fact, in a world starved for solitude, silence, and private: and therefore starved for meditation and true friendship.

While friendship has been by far the chief source of my happiness, acquaintance or general society has always meant little to me, and I cannot quite understand why a man should wish to know more people than he can make real friends of.

Miracles do not, in fact, break the laws of nature.

Humans are amphibian—half spirit and half animal.

God can’t give us peace and happiness apart from Himself because there is no such thing.

You would not have called to me unless I had been calling to you.

It is when we notice the dirt that God is most present in us; it is the very sign of His presence.

Pain insists upon being attended to. God whispers to us in our pleasures, speaks in our consciences, but shouts in our pains. It is his megaphone to rouse a deaf world.

God, who foresaw your tribulation, has specially armed you to go through it, not without pain but without stain.

Human history is the long terrible story of a man trying to find something other than God which will make him happy.

Men or nations who think they can revive the Faith in order to make a good society might just as well think they can use the stairs of Heaven as a short cut to the nearest chemist’s shop.

He died not for men, but for each man. If each man had been the only man-made, He would have done no less.

You never know how much you really believe anything until its truth or falsehood becomes a matter of life and death to you.

To what will you look for help if you will not look to that which is stronger than yourself? 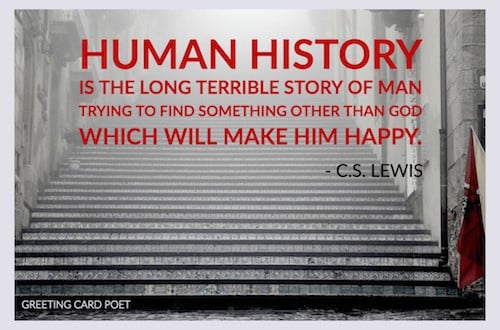 Authority exercised with humility, and obedience accepted with delight are the very lines along which our spirits live.

All virtues are less formidable to us once the man is aware that he has them, but this is especially true of humility.

A man is never so proud as when striking an attitude of humility.

The vice I am talking of is Pride or Self-Conceit: and the virtue opposite to it, in Christian morals, is called Humility.

The modern habit of doing ceremonial things unceremoniously is no proof of humility.

We ought to give thanks for all fortune: if it is good because it is good; if bad, because it works in us patience, humility, contempt of this world and the hope of our eternal country.

Humility, after the first shock, is cheerful virtue.

True humility is more like self-forgetfulness than false modesty.

If anyone would like to acquire humility, the first step is to realize one is proud. Nothing can be done before it.

Crying is all right in its way while it lasts. But you have to stop sooner or later, and then you still have to decide what to do.

Nothing that you have not given away will ever be really yours.

There are far, far better things ahead than any we leave behind.

No man knows how bad he is till he has tried very hard to be good.

All get what they want; they do not always like it.

Don’t let your happiness depend on something you may lose.

Progress means not just changing, but changing for the better.

One road leads home and a thousand roads lead into the wilderness.

A pleasure is not full grown until it is remembered.

When you are behaving as if you loved someone you will presently come to love him.

Reality is not neat, not obvious, not what you expect.

If we find ourselves with a desire that nothing in this world can satisfy, the most probable explanation is that we were made for another world.

In reality, moral rules are directions for running the human-machine.

I believe in Christianity as I believe that the sun has risen: not only because I see it, but because by it I see everything else.

As long as you are proud, you cannot know God.

I think that if God forgives us we must forgive ourselves. Otherwise, it is almost like setting up ourselves as a higher tribunal than Him.

Faith in Christ is the only thing to save you from despair.

The Son of God became a man to enable men to become sons of God.

I didn’t go to religion to make me happy. I always knew a bottle of Port would do that. If you want a religion to make you feel really comfortable, I certainly don’t recommend Christianity.

A man can no more diminish God’s glory by refusing to worship Him than a lunatic can put out the sun by scribbling the word ‘darkness’ on the walls of his cell.

God cannot give us a happiness and peace apart from Himself, because it is not there. There is no such thing.

Of all the bad men, religious bad men are the worst.

Do not let us mistake necessary evils for good.

Gratitude looks to the past and love to the present; fear, avarice, lust, and ambition look ahead.

Hardship often prepares an ordinary person for an extraordinary destiny.

Education without values, as useful as it is, seems rather to make a man a more clever devil.

I have learned now that while those who speak about one’s miseries usually hurt, those who keep silence hurt more.

C.S. Lewis was one of the most famous British writers. He is well known for his work of fiction and non-fiction. Lewis was also a lay theologian and became famous for his radio broadcasts during wartime. He wrote over 30 books with millions of copies sold in dozens of languages. Learn more at C.S. Lewis official website.

Some of C.S. Lewis’ most famous books include The Screwtape Letters, The Space Trilogy, and The Chronicles of Narnia. He also wrote several non-fiction Christian books.

C.S. Lewis was an Anglican. He was baptized in the Church of Ireland. He claims to have lost is faith during his young years before returning to the fold at 32.