The best Single Quotes from great achievers show that you don’t always have to be in a relationship to have a great life. It also means that happiness isn’t always tied to who you have in your life. You are the creator of your own happiness and don’t let anyone tell you otherwise.

From successful performers to scholars to leaders, many have realized that there is nothing wrong or awkward about living a single life. In fact, it has been a blessing and boon to many. Find out what these amazing people have to say about being single. These quotes on a single life can change your perspective about a life where you are stronger, better, and more fruitful.

Quotes About Being Single

My boyfriend is so handsome, looking all invisible and stuff.
Unknown

Relationship Status: Table for one, but drinks for two.
Unknown

Being single is definitely better than being with the wrong person.
Hassan Choughari

Wait for the person who will do anything to be your everything.
Unknown

Those who fly solo, have the strongest wings.
Unknown 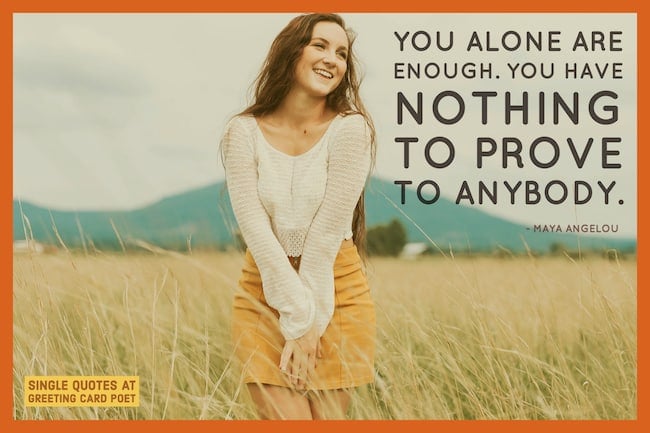 As a body everyone is single, as a soul never.
Hermann Hesse

I love being single. It’s almost like being rich.
Sue Grafton

Being single doesn’t make you weak, it means that you are strong enough to be on your own.
Unknown

A woman should be like a single flower, not a whole bouquet.
Anna Held 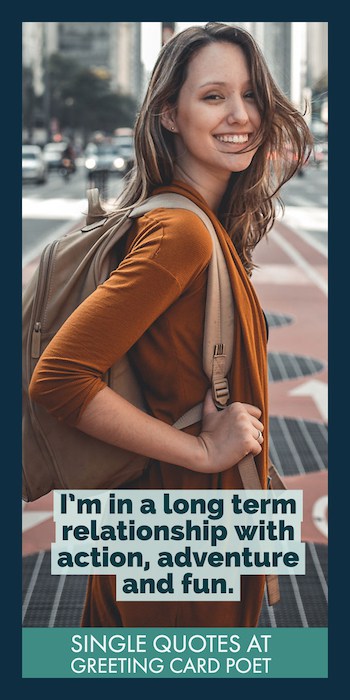 The most profound relationship we’ll ever have is the one with ourselves.
Shirley MacLaine

Being single is getting over the illusion that there is somebody out there to complete you.
Unknown

It is good to be lonely, for being alone is not easy.
Rainer Maria Rilke

Being single doesn’t mean you’re weak. It means that you’re strong enough to wait for what you deserve.
Niall Horan

Being single doesn’t mean no one wants you, it means God is still busy writing your love story.
Unknown

I’m as single as a dollar and I’m not looking for change.
Unknown

Single is not a status, it is a word that describes a person who is strong enough to live and enjoy life without depending on others.
Unknown

I like being single, I’m always there when I need me.
Art Leo

Being single doesn’t mean that you know nothing about love. Sometimes being solo is wiser than being in a false relationship.
Unknown

Being brave enough to be alone frees you up to invite people into your life.
Mandy Hale

People would be a lot better off if they’d enjoy being single.
Lewis Black

Being single is pretty good. It’s a nice sense of irresponsibility.
Michael Douglas 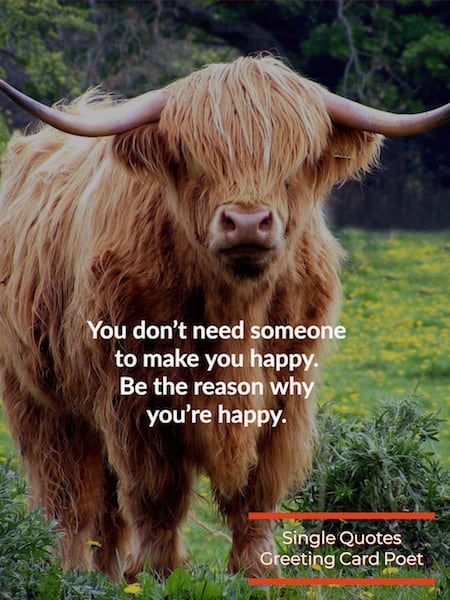 Too many women throw themselves into romance because they’re afraid of being single.
Julie Delpy

Any mother could perform the jobs of several air traffic controllers with ease.
Lisa Alther

Just because a single-mom usually can’t be bothered to spend much time on her make-up doesn’t mean that she has given up on romance.
Kemmy Nola

Remember that a single mom is just like any other mom and that our number one priority is till our kids.
Paula Miranda

Being a full-time mother is one of the highest salaried jobs in my field since the payment is pure love.
Unknown

Mothers – especially single mothers – are heroic in their efforts to raise our nation’s children.
Evan Bayh

She has to have four arms, four legs, four eyes, two hearts, and double the love. There is nothing single about a single mom.
Mandy Hale

Mothers are fonder than fathers of their children because they are more certain they are their own.
Aristotle

The most difficult part of dating as a single parent is deciding how much risk your own child’s heart is worth.
Dan Pearce

My alone feels so good, I’ll only have you if you’re sweeter than my solitude.
Warsan Shire

To love oneself is the beginning of a lifelong romance.
Oscar Wilde

I never found a companion that was so companionable as solitude.
Henry David Thoreau

Single is an opportunity to live life on your own terms and not apologize.
Mandy Hale

You alone are enough. You have nothing to prove to anybody.
Maya Angelou

You’re single not because you are not good enough for one, it’s that you’re too good for the wrong one.
Chris Burkmenn

Until you get comfortable with being alone, you’ll never know if you’re choosing someone out of love or loneliness.
Mandy Hale

Single does not necessarily mean loneliness and having a relationship does not always mean being happy.
Unknown

Single not a Status Image 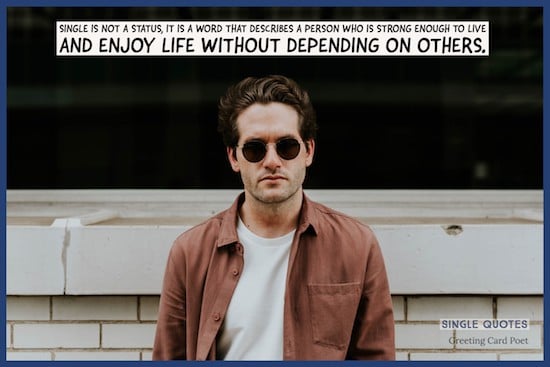 I celebrate myself and sing myself.
Walt Whitman

Being single used to mean that nobody wanted you. Now it means you’re taking your time deciding how you want your life to be and who you want to spend it with.
Unknown

If you are going to trust one person, let it be yourself.
Robert Tew

Single is no longer a lack of options – but a choice.
Mandy Hale

Single means you’re only taking your time deciding how you want your life to be and who you want to spend it with.
Unknown

The more you like yourself, the less you are like anyone else, which makes you unique.
Walt Disney

Being single is not always a curse. Sometimes it is a blessing because you don’t have to worry about being disappointed.
Unknown

Of all the people you will know in a lifetime, you are the only one you will never lose.
Jo Coudert

I’m in a long term relationship with action, adventure, and fun.
Unknown

I’m not sure if it’s better to be alone but it’s probably safer.
Eleanor Prescott

If we seek paradise outside ourselves, we cannot have paradise in our hearts.
Thomas Merton

If you aren’t happy single, you won’t be happy taken.
Unknown

I’d rather be alone than unhappy.
Whitney Houston

You don’t need someone to make you happy. Be the reason why you’re happy.
Unknown

Nowhere can man find a quieter or more untroubled retreat than in his own soul.
Marcus Aurelius

Appreciate being single because that’s when you grow the most & with that growth, you come to know what you’re looking for.
Daniel Goddard

Marriage is a great institution, but I’m not ready for an institution yet.
Mae West

When did being single become a disease?
Michael Thomas Ford

You can never be happy as someone’s other half unless you can be happy as a whole all on your own.
Unknown

Liz is a writer, poet, and chess player who lives in Minneapolis.

You’re on the Single Quotes page.