These lonely quotes echo the realities of life at times. Loneliness can be the reason for sorrow in life. Many folks have said a lot about this subject and how despairingly difficult it is to bear the pain.

A person can become and feel lonely for so many reasons but coping with it can be one of the most difficult things in life. If you are dealing with these feelings, hopefully, these quotes might help you understand your situation better and may even soothe your heart.

Quotes About Being Lonely

Autobiography begins with a sense of being alone. It is an orphan form.
John Berger

What a lovely surprise to finally discover how unlonely being alone can be.
Ellen Burstyn

Don’t go away. I don’t want to be alone. I can’t stand being alone.
Arnold Rothstein

If you wanted to do something absolutely honest, something true, it always turned out to be a thing that had to be done alone.
Richard Yates

The trouble is not really in being alone, it’s being lonely. One can be lonely in the midst of a crowd, don’t you think?
Christine Feehan

I only go out to get me a fresh appetite for being alone.
Lord Byron 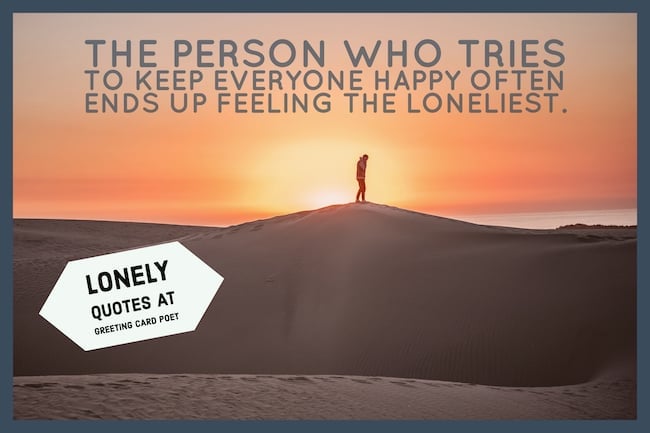 We’re born alone, we live alone, we die alone. Only through our love and friendship can we create the illusion for the moment that we’re not alone.
Orson Welles

He succeeded in being considered totally uninteresting. People left him alone. And that was all he wanted.
Patrick Süskind

Until you get comfortable with being alone you’ll never know if you’re choosing someone out of love or loneliness.
Mandy Hale

The person who tries to keep everyone happy often ends up feeling the loneliest.
Unknown

You might want to check out Social Distancing Quotes.

Loneliness and the feeling of being unwanted is the most terrible poverty.
Mother Teresa

Music was my refuge. I could crawl into space between the notes and curl my back to loneliness.
Maya Angelou

Pray that your loneliness may spur you into finding something to live for, great enough to die for.
Dag Hammarskjold

No one ever discovers the depths of his own loneliness.
Georges Bernanos

Solitude is not the same as loneliness. Solitude is a solitary boat floating in a sea of possible companions.
Robert Fulghum

The sky is one whole, the water another; and between those two infinities the soul of man is in loneliness.
Henryk Sienkiewicz 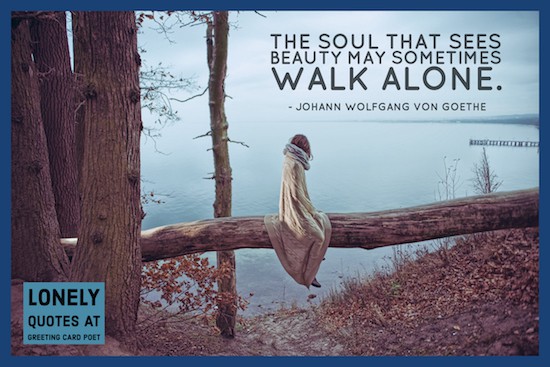 People who cannot bear to be alone are generally the worst company.
Albert Guino

When we truly realize that we are all alone is when we need others the most.
Ronald Anthony

Solitude is the profoundest fact of the human condition. Man is the only being who knows he is alone.
Octavio Paz

Sometimes you just have to stand alone to make sure you still can.
Unknown

People think being alone makes you lonely, but I don’t think that’s true. Being surrounded by the wrong people is the loneliest thing in the world.
Kim Culbertson

I love to be alone. I never found the companion that was so companionable as solitude.
Henry David Thoreau 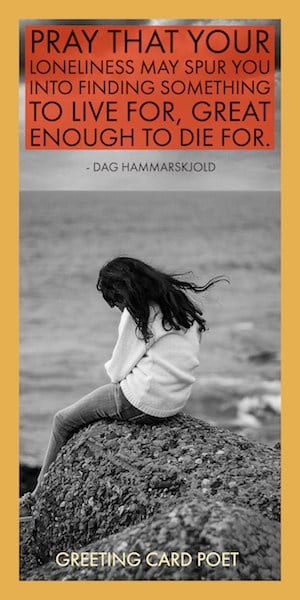 It’s better to be unhappy alone than unhappy with someone.
Marilyn Monroe

Sometimes it’s better to be alone, no one can hurt you that way.
Tinku Razoria

I live in that solitude which is painful in youth, but delicious in the years of maturity.
Albert Einstein

The loneliest moment in someone’s life is when they are watching their whole world fall apart, and all they can do is stare blankly.
F. Scott Fitzgerald

The worst part of holding the memories is not the pain. It’s the loneliness of it. Memories need to be shared.
Lois Lowry

We are all so much together, but we are all dying of loneliness.
Albert Schweitzer

The eternal quest of the individual human being is to shatter his loneliness.
Norman Cousins

Two possibilities exist: either we are alone in the Universe or we are not. Both are equally terrifying.
Arthur C. Clarke

Pray that your loneliness may spur you into finding something to live for, great enough to die for.
Dag Hammarskjold

Remember: the time you feel lonely is the time you most need to be by yourself. Life’s cruelest irony.
Douglas Coupland 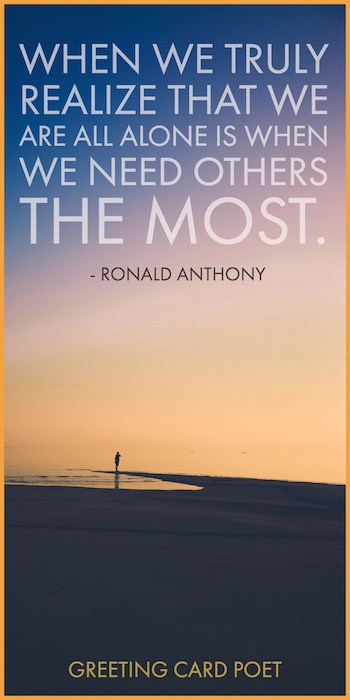 Everywhere is nowhere. When a person spends all his time in foreign travel, he ends by having many acquaintances, but no friends.
Lucius Annaeus Seneca

We become strong, I feel, when we have no friends upon whom to lean or to look to for moral guidance.
Benito Mussolini

He makes no friends who never made a foe.
Alfred Lord Tennyson

I have no friends and no enemies – only competitors.
Aristotle Onassis 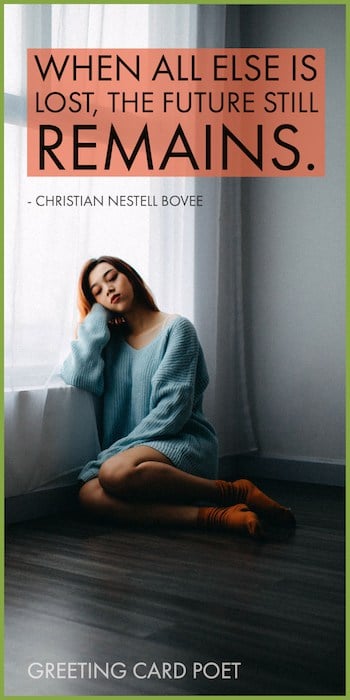 Quotes About Being Lost and Sad

Not all those who wander are lost.
J.R.R. Tolkien

There are two tragedies in life. One is to lose your heart’s desire. The other is to gain it.
George Bernard Shaw

My room is so quiet and empty it hurts.
Nina LaCour

Some beautiful paths can’t be discovered without getting lost.
Erol Ozan

No one compares to you, but there’s no you, except in my dreams tonight.
Lana Del Rey

The mind is a universe and can make a heaven of hell, a hell of heaven.
John Milton

Not until we are lost do we begin to understand ourselves.
Henry David Thoreau

In the middle of the journey of our life I came to myself within a dark wood where the straight- way was lost.
Dante Alighieri

No matter how much light I carry within me, there will always be times of feeling lost, being confused, seeking direction. It is the way of the human heart.
Joyce Rupp

The soul which has no fixed purpose in life is lost; to be everywhere, is to be nowhere.
Michel de Montaigne

When all else is lost, the future still remains.
Christian Nestell Bovee