You are here: Home / Sibling Quotes and Sayings

These sibling quotes and sayings will have you reminiscing about your family members in no time.  Most folks believe that those who have siblings are luckier than those who don’t. Your siblings may turn out to be the best friends you could ever find. They know you better than anyone else, and you can always rely on them.

Even the most accomplished and famous people have acknowledged the importance of having a brother or sister. In fact for many, the more you have, the better it is. Here are some funny and lovely sibling quotes that will help you realize why these relationships matter so much.

You don’t choose your family. They are God’s gift to you, as you are to them.
Desmond Tutu

I don’t believe an accident of birth makes people sisters or brothers. It makes them siblings, gives them mutuality of parentage. Sisterhood and brotherhood is a condition people have to work at.
Maya Angelou

Siblings are the people we practice on, the people who teach us about fairness and cooperation and kindness and caring quite often the hard way.
Pamela Dugdale

Your parents leave you too soon and your kids and spouse come along late, but your siblings know you when you are in your most inchoate form.
Jeffrey Kluger 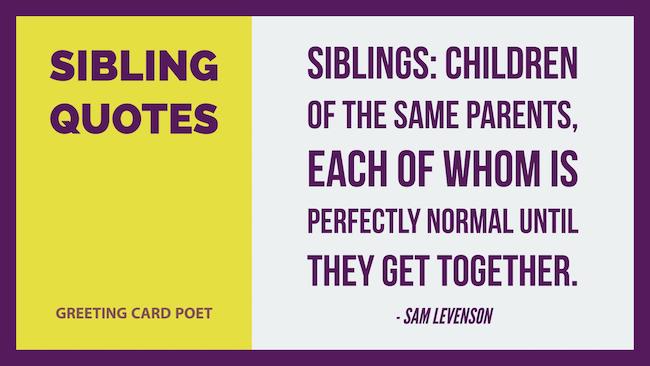 We may look old and wise to the outside world. But to each other, we are still in junior school.
Charlotte Gray

If you have a brother or sister, tell them you love them every day that’s the most beautiful thing. I told my sister how much I loved her every day. That’s the only reason I’m OK right now.
Amaury Nolasco

My siblings are my best friends.
America Ferrera 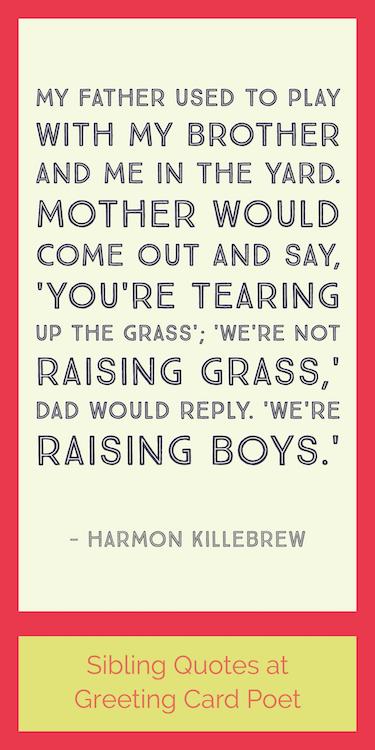 Siblings: children of the same parents, each of whom is perfectly normal until they get together.
Sam Levenson

My father used to play with my brother and me in the yard. Mother would come out and say, ‘You’re tearing up the grass’; ‘We’re not raising grass,’ Dad would reply. ‘We’re raising boys.’
Harmon Killebrew

Siblings that say they never fight are most definitely hiding something.
Lemony Snicket

There is a little boy inside the man who is my brother… Oh, how I hated that little boy. And how I love him too.
Anna Quindlen

Having a sister is like having a best friend you can’t get rid of. You know whatever you do, they’ll still be there.
Amy Li

Your siblings are the only people in the world who know what it’s like to have been brought up the way you were.
Betsy Cohen

Sometimes being a brother is even better than being a superhero.
Marc Brown

More than Santa Claus, your sister knows when you’ve been bad and good.
Linda Sunshine

What brothers say to tease their sisters has nothing to do with what they really think of them.
Esther M. Friesner

It snowed last year too: I made a snowman and my brother knocked it down and I knocked my brother down and then we had tea.
Dylan Thomas

Half the time when brothers wrestle, it’s just an excuse to hug each other.
James Patterson

The highlight of my childhood was making my brother laugh so hard that food came out of his nose.
Garrison Keillor 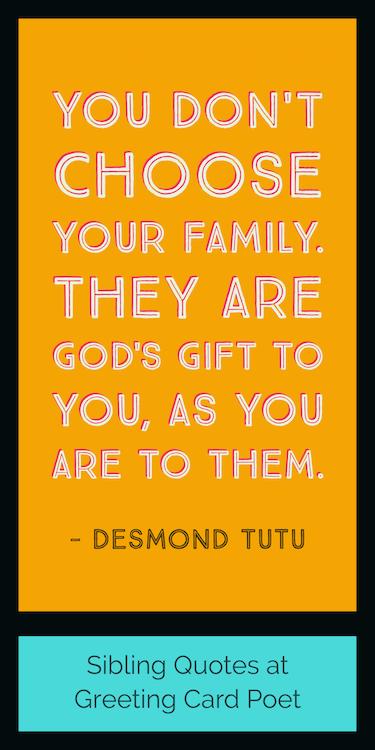 Our brothers and sisters are there with us from the dawn of our personal stories to the inevitable dusk.
Susan Scarf Merrell

As a brother and sister, our tastes were pretty different growing up. He liked a lot of early hip hop. My dad didn’t understand it and would try to talk him out of it.
Taryn Manning

Brother and sister, together as friends, ready to face whatever life sends. Joy and laughter or tears and strife, holding hands tightly as we dance through life.
Suzie Huitt

Brothers and sisters are as close as hands and feet.
Vietnamese Proverb

Sisters never quite forgive each other for what happened when they were five.
Pam Brown

One can be a brother only in something. Where there is no tie that binds men, men are not united but merely lined up.
Antoine de Saint-Exupery

The strange part about a person’s lack of trust is that it often comes from not trusting themselves.
David W. Earle

I left my family, and I left my brother and sister, and I went and lived my dream. I saw everybody, but is it ever enough?
Joan Jett

It’s especially difficult when siblings leave the nest and grow into their own person, often apart from other siblings and parents. The ones we shared so much with growing up we suddenly have nothing in common with, it seems.
Unknown

Making amends is not only saying the words but also being willing to listen to how your behavior caused another’s pain, and then the really hard part…changing behavior.
David W. Earle

It has been said that blood is thicker than water.
I hope that will prove true to us in time.
Unknown

I know it’s a cliche, but the whole family is just whacked. I mean, we’re all out of our minds. They’re the funniest, most eccentric bizarre people I’ve ever met, my siblings.
Dana Carvey – check out Dana’s Twitter account.

Our siblings. They resemble us just enough to make all their differences confusing, and no matter what we choose to make of this, we are cast in relation to them our whole lives long.
Susan Scarf Merrell

Children of the same family, the same blood, with the same first associations and habits, have some means of enjoyment in their power, which no subsequent connections can supply.
Jane Austen

A sibling represents a person’s past, present, and future.
John Corey Whaley

I think people that have a brother or sister don’t realize how lucky they are. Sure, they fight a lot, but to know that there’s always somebody there, somebody that’s family.
Trey Parker & Matt Stone

Liz is a writer and poet who lives in Minneapolis, Minnesota.

Words of Thanks and Appreciation