It’s only fitting that there’s a National Popcorn Day, and it’s celebrated every January 19.

When is National Popcorn Day Celebrated?

National Popcorn Day is observed on January 19 each year.

Other notable dates: National Popcorn Month is observed in October.

Many believe the selection of the January 19th date is linked to when the Super Bowl was played in an earlier day (middle to late January). As there’s a “bowl” in the name, I suppose it makes sense to have popcorn handy. 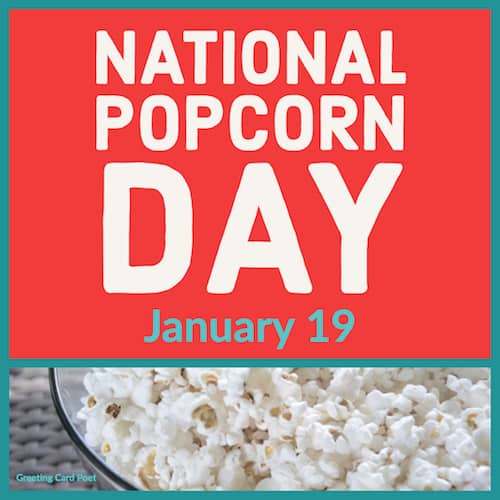 1.) The United States grows and consumes the most popcorn in the world. Americans consume 16 billion quarts of popcorn every year. This amount would fill the Empire State Building 18 times.

2.) Popcorn originated in the Americas. The oldest known ears, dating back 5,600 years, were found in a cave in New Mexico. Native Americans and early settlers grew the crop. Native Americans believed that spirits peacefully lived inside each popcorn kernel. When the kernels were heated, the spirits would get so angry that their houses would start to shake. When it got too hot, the spirits break out of their houses in a very angry burst of steam.

4.) Unlike other businesses, the popcorn business thrived during the Great Depression. As one of the more affordable treats for poor families, sales did not slow down.

5.) Seventy percent of popcorn is purchased to be eaten at home.

Inside popcorn kernels are little droplets of water. As popcorn is heated, the water turns to steam, which builds up pressure inside the kernel. Because of the hard shell, the steam has nowhere to go. When the pressure gets high enough the kernel bursts and the popcorn is turned inside out. It happens so quickly that it creates a POP sound. Popcorn kernels can pop up to 3 feet in the air.

How Popcorn is Made Video

Yes. Popcorn is low in calories and is a whole grain, fiber-rich food. It contains antioxidants and amino acids, important for sleep. Although the kernels are nutritious, it can easily become unhealthy by adding low-quality oil, salt, and butter. A bucket of movie popcorn can be 1200 calories, 60 grams of fat and 1500mg of sodium.

The healthiest way to eat popcorn is to pop plain kernels on the stovetop in a small amount of healthy oil, like olive. Popcorn has more protein than any other cereal grain, more iron than eggs or roast beef, and more fiber than pretzels.

I got thrown out of the movie theater last night for tossing popcorn at people’s heads.
I also lost my job behind the popcorn counter.

Why aren’t there many jokes about popcorn?
Because they are corny.

Why is cheddar popcorn such a terrible joke?
It’s both corny and cheesy.

Did you hear about the movie theater that was robbed of $1,000 last night?
Yeah, the thieves made away with two bags of popcorn and a box of junior mints.

What music gets popcorn to dance?
Hip Pop.

What did the baby corn say to the mom corn?
Where is my popcorn?

I just burned 400 calories.
I left the popcorn in the microwave for too long.

How is a bag of popcorn like an army?
It has lots of kernels

Butter for you than candy.

Cob-ably the healthiest snack that tastes good and is affordable.

There is not a better Pop! (Send to Dad on birthday with some popcorn.)

I hope your birthday is poppin‘.

What does a gymnast put on her popcorn? Somersault.

A circus clown gave me some free popcorn. That was a very kind jester.

This may sound corny, but you’re a-maize-ing!

Life doesn’t get any butter than popcorn!

How much do pirates charge for corn? A buc-an-ear.

What did one cob say to the other? Don’t grow too high, our ears might pop.

Did you hear about the popcorn who signed up for the army? They made him a kernel.

Get your popcorn ready, ’cause I’m gonna put on a show.
Terrell Owens

Enjoy your popcorn and enjoy the show. It’s just a movie, so have fun!
Martin Lawrence

I understand what it’s like to work all week and on Friday night just want to go and leave your brain at the door, buy some popcorn and be thrilled by something.
Don Cheadle

Well, I was born and raised in the Midwest, in Indiana specifically, and my childhood was full of weekend movies, you know, the Saturday and Sunday popcorn movies.
Sydney Pollack

Of course, life is bizarre, the more bizarre it gets, the more interesting it is. The only way to approach it is to make yourself some popcorn and enjoy the show.
David Gerrold

Hearing nuns’ confessions is like being stoned to death with popcorn.
Fulton J. Sheen

Popcorn is one of the only situations in which you eat the result of an explosion.
Dean Martin

The laziest man I ever met put popcorn in his pancakes so they would turn over by themselves.
W.C. Fields 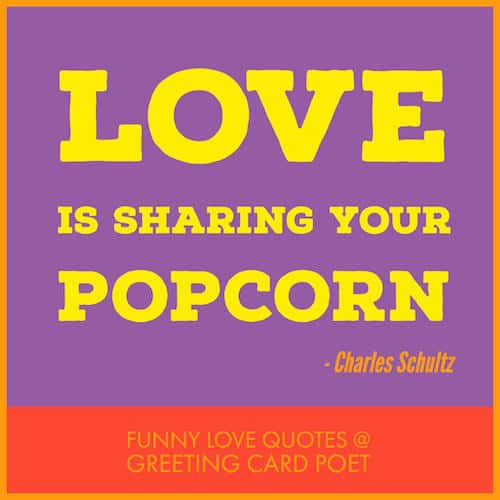 In 1965, Orville Redenbacher and his business partner Charles Bowman created an ideal popcorn that was light, fluffy, and, most importantly, inclined to pop. Orville Redenbacher dedicated his life to perfecting a lighter, fluffier popcorn. The New York Times described him as “the agricultural visionary who all but single-handedly revolutionized the American popcorn industry.”

A spokesperson for his brand, Orville was a popular site on TV commercials promoting it.

Along with the Raytheon Manufacturing Company, Percy filed a patent for the microwave cooking process in 1945.

Started Jiffy Pop, selling popcorn in a convenient aluminum foil stove-top cooking pan that became somewhat of an advertising sensation in the 1960s.

In 2001, Angie Bastian and her husband started popping popcorn in their garage and selling it at local neighborhood events and fairs. Their big break came when they started selling their kettle corn at a Minnesota Vikings Game. Angie’s Boomchickapop was in grocery stores in 2002, grew into a national business, and sold to Conagra in 2017.

A lover of popcorn, M.J. likes to pair her popcorn with a Diet Coke while watching movies at the theater.